Do numbers in a photo about worldwide COVID-19 deaths, and other leading causes of death, show that the coronavirus pandemic is a "con" that has been blown far out of proportion? No, that's not true: The picture minimizes the number of deaths from to the novel coronavirus -- by a lot -- and it suggests governments are overreacting with measures to mitigate the spread while doing nothing about the other causes of death.

The claim appeared in a tweet (archived here) put out by Jack Motley on April 12, 2020. It opened:

Our society never reacted to any of the other mortal issues that cause death in a regular basis! Some will die, yes, so is the cycle of life! On its face, This pandemic will go down as the greatest "con" of our time!

But the numbers, particularly with COVID-19, are wildly misleading. Here's the text of the photo in full.

The whiteboard list, which attributes its numbers to conservative talk show host Rush Limbaugh on April 1, claims there were 12,000 deaths from COVID-19 from Jan. 1 to March 25, 2020. But according to tracking site worldometers.com, there were 21,283 deaths from coronavirus in the world as of March 25, 2020. 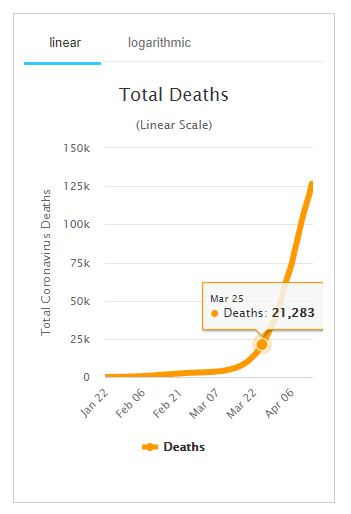 The goal of the tweet, in which the list shows abortion as the top killer and coronavirus as the least lethal, appears to be to suggest that governments here and across the globe have overreached with stay-at-home and lockdown orders.

However, the list grossly underestimates the confirmed death total related to COVID-19 -- a total that grew exponentially since the photograph was posted. Consider: In just the four days since the post, the coronavirus death toll has grown to about 135,700 worldwide (overtaking the seasonal flu number in the image) even with drastic measures to slow down the spread of the disease in place.

The picture of the figures attributes them to Limbaugh on April 1, 2020. But there is no explanation as to why the April 1 numbers for Coronavirus weren't used by Limbaugh. Here's Limbaugh's show in full:

According to worldometers.com, there were 47,210 deaths from Coronavirus as of April 1.

But coronavirus wasn't the only tally that the hand-written figures were purporting to demonstrate, as they depicted numbers of cases of other large-scale deaths around the world. But it is unclear where these numbers orginated, and we will update the story if we can compare them to the coronavirus-related deaths. 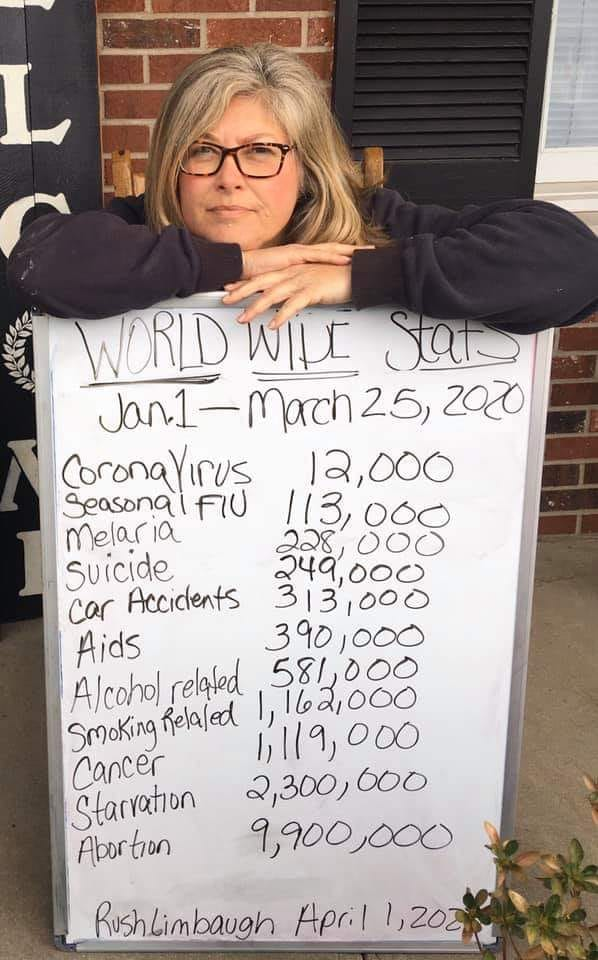 For reference, here are some numbers to consider:

The chart also claims there were 228,000 cases of "Melaria (sic)" But the Centers for Disease Control and Prevention reports there were approximately 405,000 global deaths due to Malaria in 2018.

As for suicide, the World Health Institute shared that close to 800,000 people die due to suicide every year. Deaths by car accidents are listed as 313,000. The Association for Safe International Road Travel states approximately 1.35 million people die in road crashes each year around the globe. And the World Health Organization said 770,000 died from HIV-related infections in 2018.

Again, it's unclear how the numbers in the whiteboard post were derived, other than possibly dividing the totals listed here by months, and then presenting them as the actual figures for those dates. If that is the case, some numbers for the manners of death listed are close, but others are misleading.

Lead Stories will attempt to further verify these numbers. But if the post was simply to suggest that COVID-19 is just a "con" perpetrated against the United States and the worldwide community, the tweet fails to make that point as the numbers for the novel coronavirus are misleading at best, and just false at worst.