Is the video of a Minneapolis police officer pinning down George Floyd before Floyd died a "false flag" because the police car license plate that says "POLICE" is fake? No, that's not true. The video of Minneapolis police officer Derek Chauvin putting his knee into Floyd's neck before he died shows a police car with the license plate "POLICE" -- which is what all of the license plates on police vehicles in Minneapolis say. The video is not a "false flag" and is a real video showing the incident.

The claim appeared as a post (archived here) where it was published on Facebook on May 27, 2020, under the title "I'm beginning to think this was a false flag to create more division🤔." It opened:

Police PLATES don't say POLICE.
These Clowns are stupid.
You can't show murders legally on Twitter but you can show propaganda. Question everything from now on.

The photograph shows a screen grab from the video filmed on May 25, 2020, showing Chauvin pinning Floyd down next to a Minneapolis polcie vehicle. On the Facebook photo "False Flag Plates" is written with a red arrow drawn to the license plate.

But police vehicles in Minneapolis do say "POLICE" on their license plates, this is not a fake or photoshopped photograph. The evidence to prove that is extensive.

Here is a photograph from the Minneapolis Police Department's verified Facebook page from March 2017 that shows the license plate reading "POLICE." 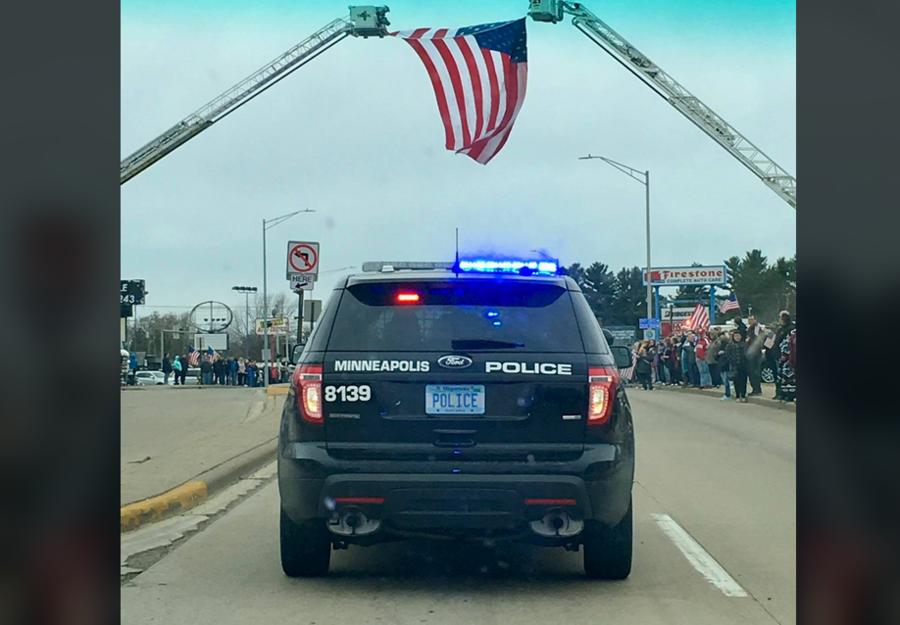 Minneapolis news station FOX 9 published a story on May 5, 2020, unreleated to the more recent incident but it showed a photograph of a Minneapolis police vehicle with a license plate that says "POLICE." 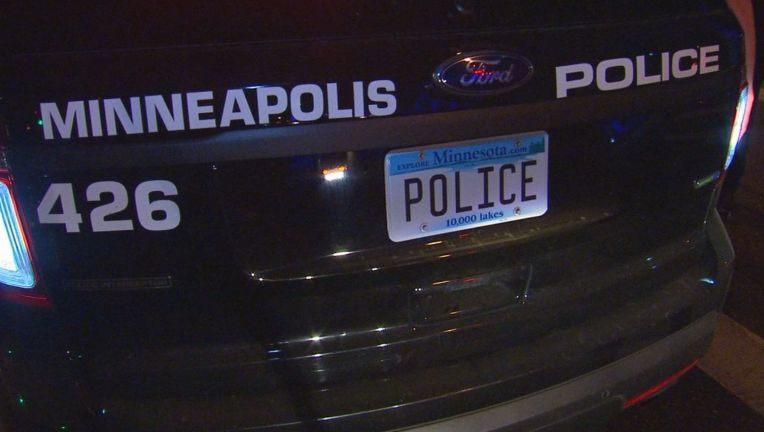 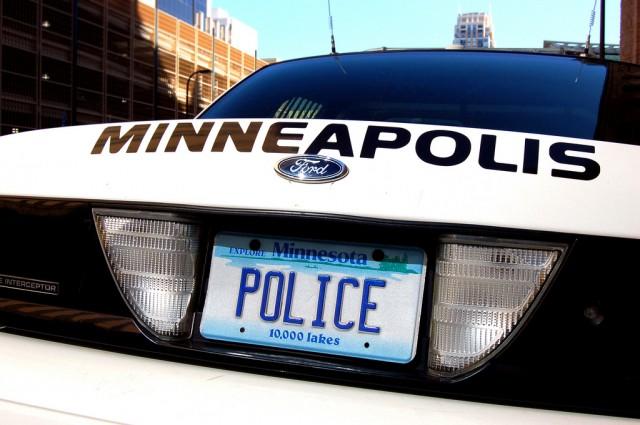 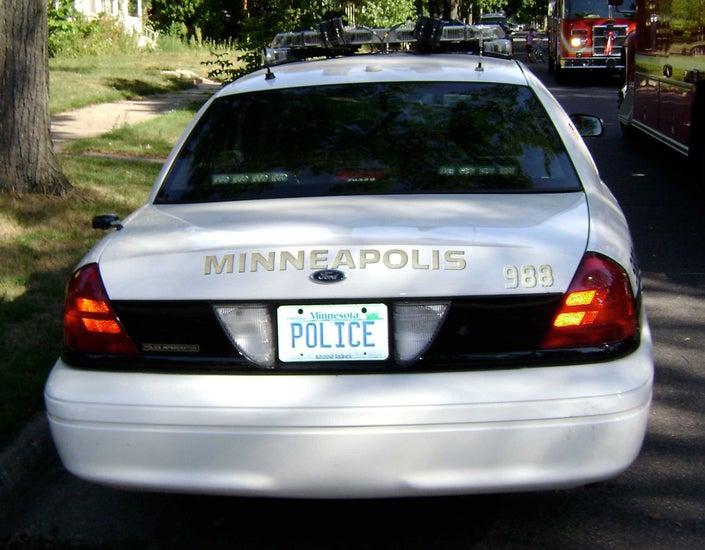 A news article from the town of Bemidji, Minnesota, uses a photograph of Bemidji police vehicle with the license plate "POLICE." Bemindji is about 215 miles away from Minneapolis in Minnesota. 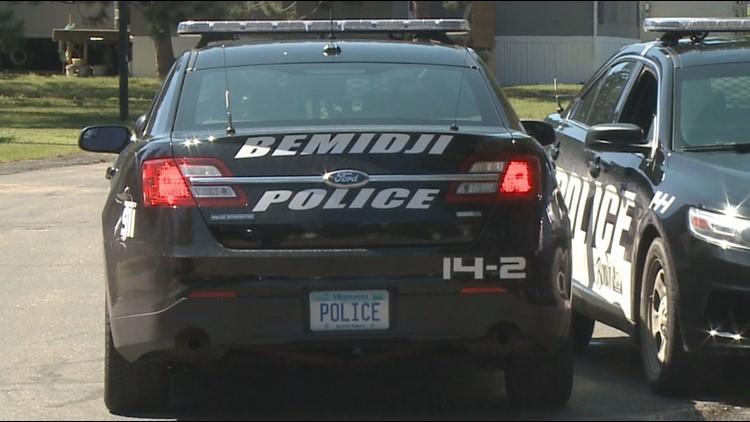 A user on Quora.com noted that the police cruisers in Minnesota have license plates that read "POLICE," sheriff's departments' plates read "SHERIFF" and state troopers have plates that say "STATE PATROL." 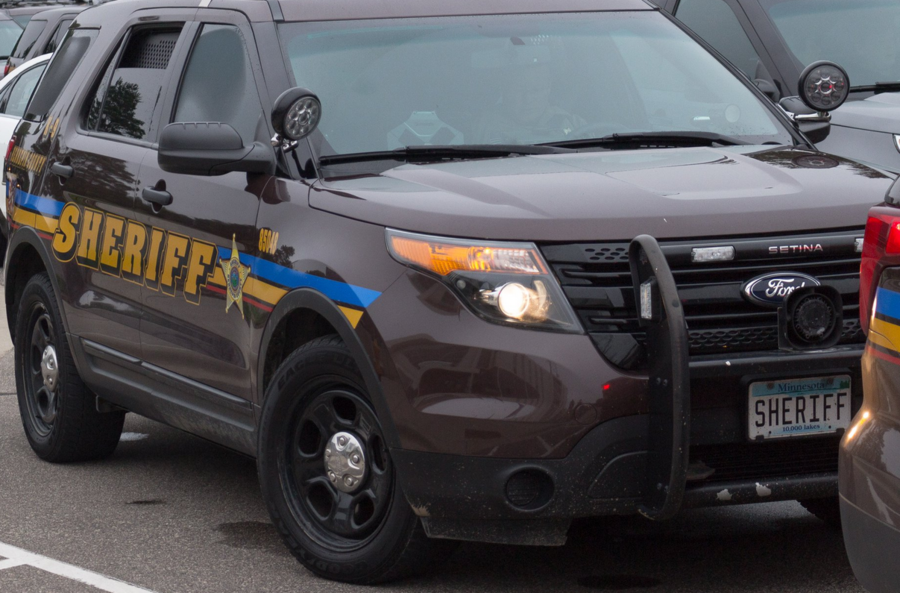 RT @MSPPIO_NW: WC MN - Troopers are out w/several crashes, vehicles slid off road and jackknifed semis currently in the last few minutes: I-94 & Hwy10 in Clay County. This semi I-94 a few miles east of Moorhead (no inj) pic.twitter.com/QVZXe4DZSI

The video of Chauvin with his knee on Floyd's neck in front of a Minneapolis police vehicle with the license plate "POLICE" is not a "false flag."

Chauvin and three other officers from the scene have been fired.

Here is video from CBS NEWS that shows Chauvin with his knee on Floyd in front of a Minneapolis police car with the plate "POLICE."

Another post suggested Floyd's killing was a staged event carried out for a "political advantage." The post questioned the "POLICE" tag as evidence of a false flag incident:

FINALLY....‼️‼️ this entire scene plays out with the cop car and license plate that says "POLICE". The plate was perfectly framed for maximum subliminal impact. This also means he was literally just 1 foot away from the back seat of the police car and these cops thought it was smarter to kill a black man on camera, than to pick him up and move him one foot into the back of the police car. You can draw your own conclusions, but this appears to have all the earmarks of George Soros. Please open your eyes!!!! Thanks to Chris Tanner for photo and research

George Soros is the billionaire who is villainized by the extreme right as the financier and mastermind before global conspiracies. This post suggested it the timing of the incident was coordinated with former President Obama:

Additionally, there is substantial video evidence to arrest at least one officer now. Why would the local authorities not charge him immediately, unless there was a political advantage not to!
Is it mere coincidence that this happens right about the exact moment the COVID-19 fear campaign falls apart, and after it has psychologically traumatized the entire country and got everyone at each other's throats and suicide attempts are spiking? Is it mere coincidence that this happens after the Auhmed Aubrey case... Which somehow eluded the mainstream media completely until two whole months after he was killed? When has that ever happened? Timing issue? Is it mere coincidence that Supreme Race Baiter Obama was making videos a couple weeks ago connecting COVID with "Systemic Racism"?

I must say this lady has a point, the fact that they have different badges is very weird, the license plate would also...

There is no evidence there is a widely-coordinated conspiracy to fake a police officer's killing of a black man for political gain.