Did protesters steal military tanks during demonstrations in Atlanta in June 2020? No, that's not true. The armored vehicles seen in a viral video were apparently part of a music video production, unrelated to the protests.

The claim was made alongside a video (archived here) posted by hoodsite.com on June 5, 2020. The title of that video read:

The claim was also posted on Twitter by conservative commentator Jon Miller, who has close to 80,000 followers. Here is a screen grab of his original post, which has been deleted from his feed. 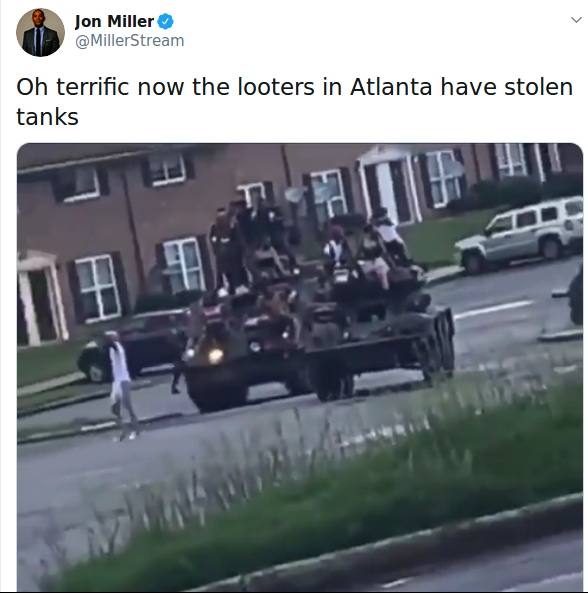 Miller later apologized for sharing the video on Twitter.

Tanks were not stolen. It appears they were rented by a rap group and staged. Apologies for sharing previous video.

Atlanta authorities similarly say the tanks in the video were unrelated to recent protests, which have exploded in the wake of George Floyd's death. Floyd, an African American man, died after a white police officer knelt on his neck for nearly nine minutes.

Officer Steven Avery, a spokesman with the Atlanta Police Department, spoke to Heavy, a U.S.-based news site. Avery said that the video in question shows what "appears to be a music production," according to Heavy, which also reported that police are not investigating the incident.

Lead Stories reached out to the Atlanta Police Department for comment. Police have not yet responded to the request.