Did NASA sight a huge "alien cube ship" in pictures taken by its SOHO (Solar and Heliospheric Observatory) satellite? No, that's not true: According to NASA the black squares in pictures returned by SOHO are nothing more than missing data in the photos, which consist of multiple smaller images combined like a mosaic. Scott Waring, the "UFO hunter" named in the story, has been making similar claims based on SOHO images since 2011 but none of them led to a scientific publication or an actual NASA announcement.

The most recent instance of the "alien cube ship" story appeared in an article (archived here) published by the online edition of the Daily Express on July 26, 2020, under the title "UFO sighting: 'Alien cube ship' TEN TIMES bigger than Earth captured by NASA". It opened:

After analysis of images shot by US-based space agency NASA's Solar and Heliospheric Observatory (SOHO) satellite, alien life enthusiasts believe they have spotted a huge UFO near the Sun. What appears to be a solar anomaly close to the Sun's surface is claimed by alien life conspiracy theorists to be a UFO of an almost incomprehensible scale.

According to prominent alien hunter Scott Waring, the supposed UFO is at least 'ten times the size of Earth'.

Mr Waring also believes the UFO came from the Sun's core, where it is feeding off our host star's immense energy.

This is the image that was used to illustrate the story and to prove the theory: 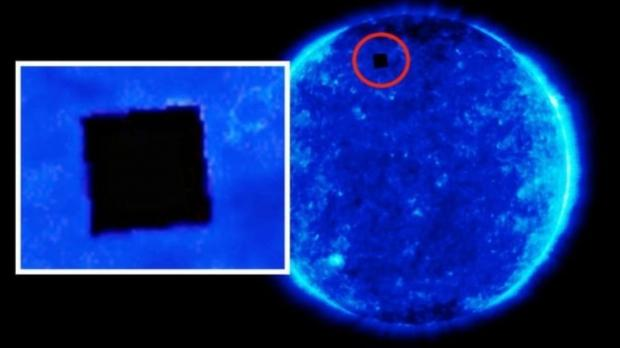 Express did include the following phrases to offer an alternative explanation:

According to former NASA engineer James Oberg, most UFO sightings are nothing more than "space dandruff" floating in front of cameras.

These specks of dandruff can be anything from bits of chipped paint drifting aimlessly in zero gravity, flakes of ice or spacecraft insulation that has broken off.

He said: "I've had enough experience with real spaceflight to realise that what's being seen in many videos is nothing beyond the 'norm' from fully mundane phenomena occurring in unearthly settings."

Mr Oberg argued human brains are not wired to make sense of these tiny objects floating above the planet.

Oberg runs a website that contains information on spotting UFO hoaxes. However Express also included these exact same phrases in an article published in April 2020 so it is clear they did not ask James Oberg about these pictures specifically and the "black cube" does not look anything like "dandruff" or "chipped paint" so readers could still come away with the impression the images really show an alien ship.

When Lead Stories actually contacted NASA, a NASA solar astrophysicist named C. Alex Young who worked on SOHO had this to say about the black cubes:

Something I saw many times during my SOHO days. A simple data dropout. The image stream for SOHO/EIT came in blocks so if part of the data was lost you got a missing block.

SOHO, the Solar & Heliospheric Observatory, is a project of international collaboration between ESA and NASA to study the Sun from its deep core to the outer corona and the solar wind.

Among the instruments on the observatory we indeed find one named the EIT (Extreme ultraviolet Imaging Telescope).

Scott Waring, the "UFO hunter" cited in the story did share photos taken by that instrument on his website on July 15, 2020 (archived here), claiming it showed a huge ship 10 times bigger than Earth. 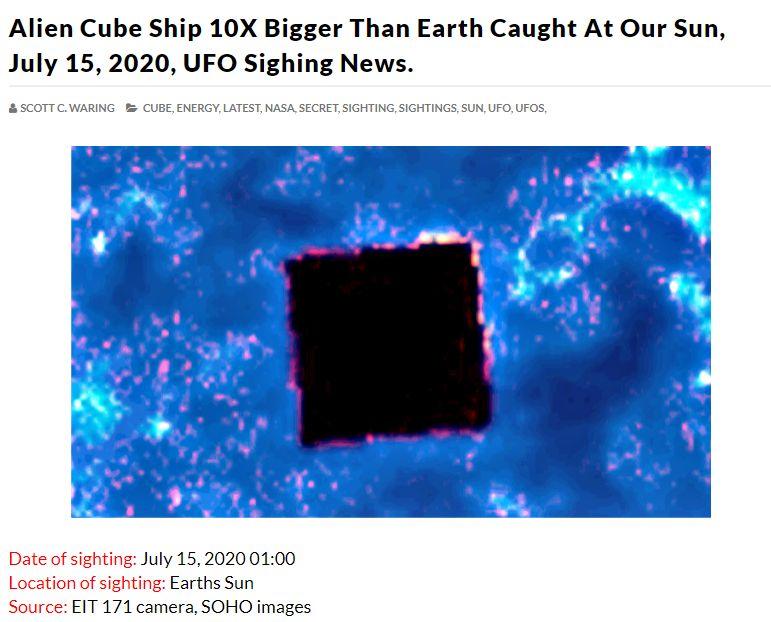 He made the same claim in 2017 on a different website (archived here) but back then he said the ship was only two times the size of Earth. 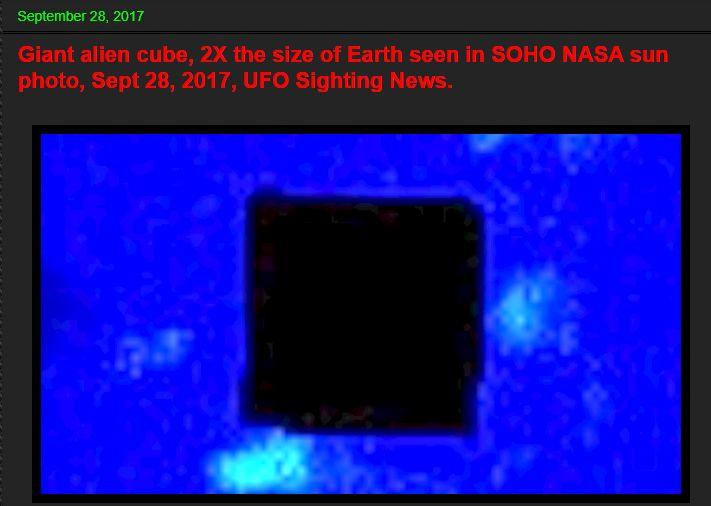 In 2016 he also made the same claim on that same website (archived here) but back then it was just a "giant" black cube. 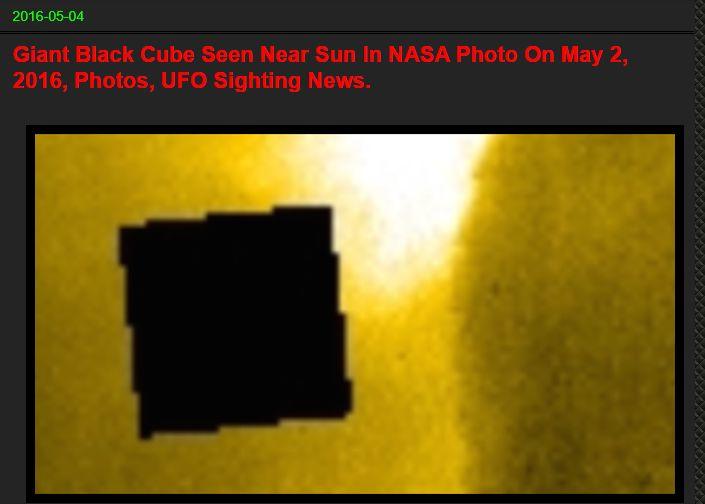 And in 2013 on the same website (archived here) it was a "Borg" cube, named after an alien race from the Star Trek franchise. 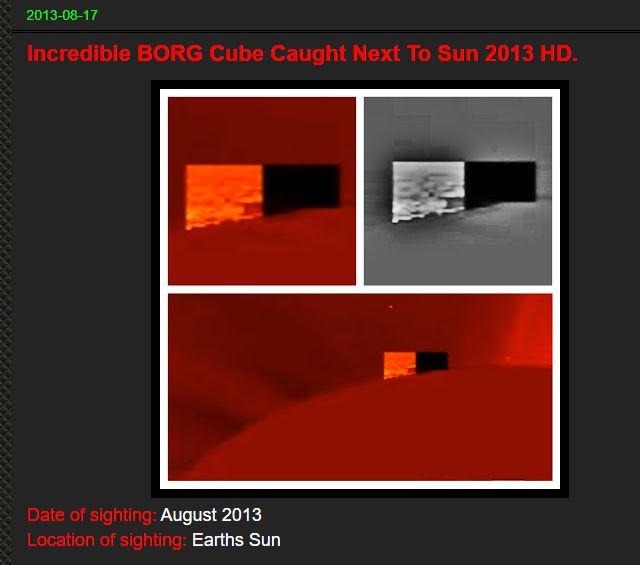 Back in 2011 on the same website (archived here) it was a "giant" black cube again. 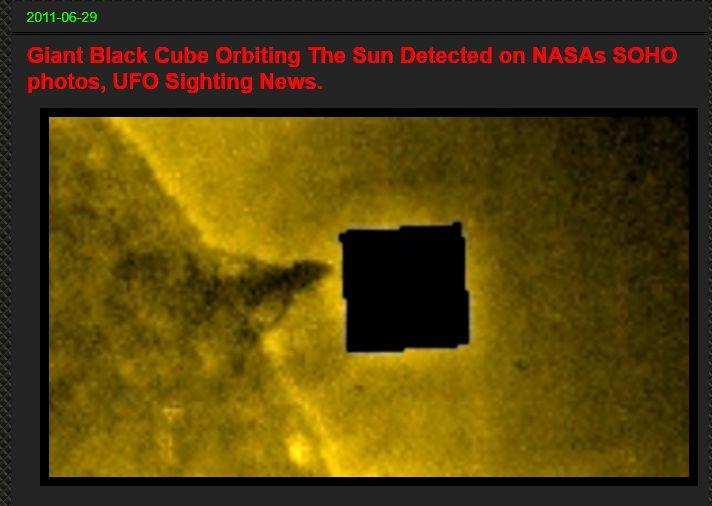 It appears Waring has been basing his conclusions on missing image data all this time, occasionally relying on image enhancement techniques that, ironically enough, the actual SOHO team described in a 2003 article titled "How to make your own UFO".