Was a "black kid named Tyrone Woodfork" arrested "yesterday" for severely beating an elderly Tulsa, Oklahoma, white couple, raping and killing the wife and leaving the husband for dead -- and is the national media ignoring the crime? No, that's not true on both counts. The crime did occur, but in 2012, not recently. Tyrone Woodfork was convicted in 2014 and is serving a life sentence for the the crime, which was covered by national and international media as well as local news when it happened.

Tulsa, Oklahoma... a black kid named Tyrone Woodfork severely beat an elderly couple, a Mr. & Mrs. Strait, who had been married for 65 years. Tyrone RAPED Mrs. Strait, and she died of injuries received at his hands. Mr. Strait served in the 101st Airborne during WWII. NO national media carried the story. Tyrone was arrested yesterday. I supposed that if Mr. Strait had shot Tyrone, the whole country would know about the story. As it is, only Mrs. Strait died, so it's not of interest to Brian Williams and the rest of the main stream media media. Think about it. After 65 years of marriage. After serving our country. After 90 years of life, Mr. Strait has lost his wife to a rapist/murderer. NO ONE in the national media gives a flip and neither does Fakebook.

The details of the crime in the Facebook post are correct but misleading. The clear implication is that it was a recent crime, but it happened in March 2012 and did draw extensive media coverage.

Here is part of the FOX News story about the crime published on May 7, 2012:

Nancy Strait, 84, was legally blind and was beaten and raped in her own home. Her husband of 65 years, Bob Strait, was 89 and partially deaf. He was a World War II veteran. He died weeks after the attack but the medical examiner ruled that he died from issues not related to the attack. Woodfork was not charged with his murder.

CBS News 6 published a story on March 14, 2012 about the crime and before Woodfork was arrested.

Tulsa's local newspaper, the Tulsa World, extensively covered the case with an article about Woodfork's arrest on March 15, 2012.

The Tulsa World posted an article on July 17, 2020, debunking the claim that the story was new and was not getting media attention, linking to their previous coverage of Woodfork's arrest and trial and appeal update.

The truth: Tyrone Woodfork's arrest in the assault on Bob and Nancy Strait took place eight years ago and was covered by Tulsa World, local broadcast media as well as at least one cable TV news outlet.

Woodfork was convicted in May 2014 for the rape and murder of Nancy Strait. He has been serving multiple life-sentences and is currently in Oklahoma Department of Corrections custody at a facility in Lawton.

In 2016 Woodfork's appeal was denied and his four life sentences were upheld.

Here is Woodford's most recent mugshot, taken in 2019 and made available in 2020, from the Oklahoma Department of Corrections. 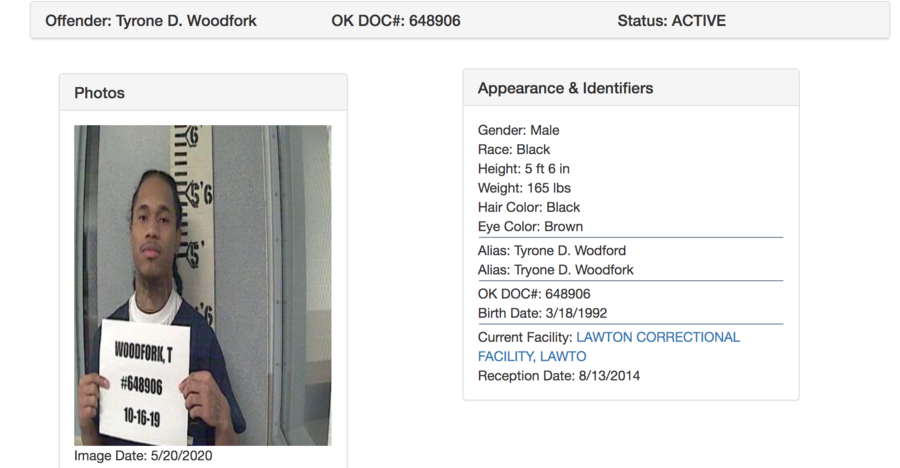