Did Regis Philbin leave $20 million dollar to the Trump campaign after his recent death? No, that's not true. The story was published by a liberal satire website that tries to mislead Trump supporters and Republicans into sharing made up stories that are clearly marked as satire when you actually click them. Articles from the site are frequently copied by foreign-run fake news websites. The people liking and sharing these stories are enriching foreign website operators or a liberal from Maine via the ad revenue generated with the content which is probably not what they expected or wanted.

The claim originated in an article published by America's Last Line of Defense on July 28, 2020 titled "Regis Left $20 Million to Trump Campaign" (archived here) which opened:

There are not many people in Hollywood who are worthy of our respect or admiration, but there are a few. Regis Philbin was one of those few.

Philbin passed away at the ripe age of 88. He leaves behind a legacy of an enormously successful career in film and television. His moments on the screen filled many with joy, his humor is always on point, never crass. He was always a gentleman just like President Trump.

He was also a lifelong conservative and republican, one of the few who was open about this in Hollywood and still managed to maintain a prominent role in the industry. He was proud of this and attributed it to his threats of lawsuits were he to be blacklisted as so many of his fellow conservatives in Hollywood have been.

However the story was published under a category named "Silly Tater Satire" on a site with several satire disclaimers. Philbin did pass away, reportedly from heart disease. But FEC records reveal he donated both to Republican and Democrat campaigns in the past.

The site that published the satirical story is part of the "America's Last Line of Defense" network of satire websites run by self-professed liberal troll Christopher Blair from Maine along with a loose confederation of friends and allies. He runs several websites and Facebook pages with visible satire disclaimers everywhere. They mostly publish made-up stories with headlines specifically created to trigger Republicans, conservatives and evangelical Christians into angrily sharing or commenting on the story on Facebook without actually reading the full article, exposing them to mockery and ridicule by fans of the sites and pages.

That didn't stop the story from being posted on around 61 Facebook groups and pages, racking up an impressive 260K interactions according to social media monitoring tool CrowdTangle: 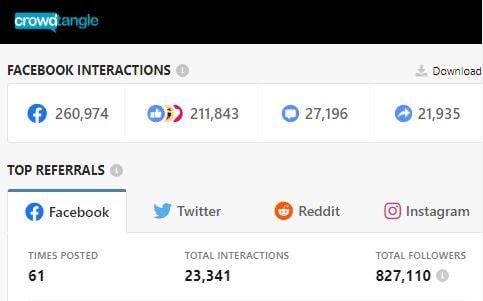