Did Ruth Bader Ginsberg say the age of consent for sexual acts must be lowered to age 12 years old? No, that is not true. The Supreme Court justice did not ever say this. The claims have gone viral with fake quotes from Ginsberg. They were inaccurately attributed to a paper she co-authored in 1974 in which she was arguing for gender-neutral terms to be used in the penal code for rape cases.

The age of consent must be lowered to age 12 years old. Ruth Traitor Ginsberg 1977

In the paper she co-authored in 1974, Ginsberg was quoting a proposed 1973 Senate bill that, she said, properly used gender-neutral terms in the definition of rape, which included rape against a person that was "less than 12 years old." She was not advocating to lower the age of consent and the terminology in the claim was not hers.

Here is another claim against Ginsberg saying she said "Pedophilia is good for the children." There is no evidence she ever said that, either:

https://www.fulcrumnews.com/blog/2018/2/13/supreme-swamp-justice-ruth-bader-supports-pedophilia These people are satanic...

The accusations that have gone viral against Ginsberg began during her 1993 Senate confirmation hearing after President Bill Clinton nominated her to the Supreme Court.

Susan Hirschmann, executive director of Eagle Forum, a conservative group founded by Phyllis Schlafly, testified to the Senate Committee on July 23, 1993, claiming that Ginsberg wanted to lower the age of consent to 12.

Here is a link to the transcript from Hirschmann's testimony. 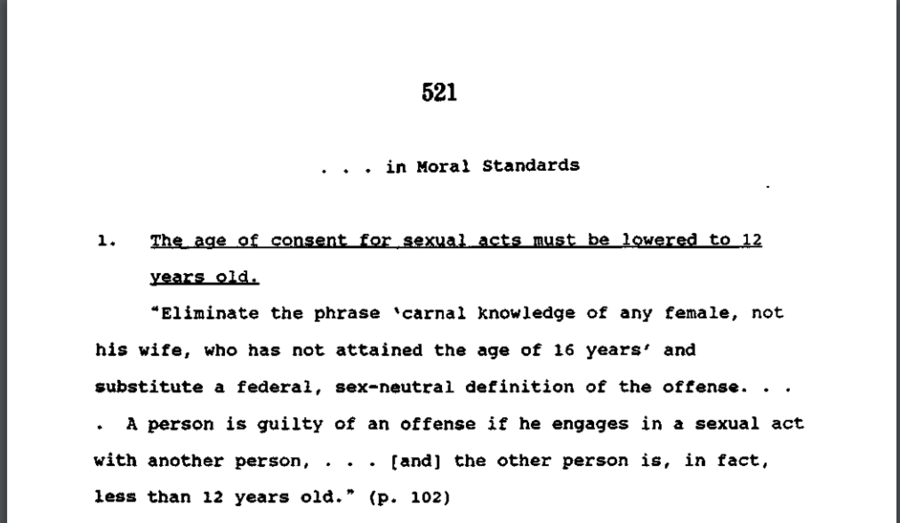 The 1974 report Ginsberg co-authored, titled "Sex Bias in the U.S. Code," was published by the U.S. Commission on Civil Rights in 1977. In it she was arguing that there was a gender bias in the United States penal code and for equality purposes laws should use a gender-neutral terms to recognize either male and female victims of crimes.

She quoted the proposed 1973 Senate bill, S. 1400, in §1631 (which never became law) with a definition of rape. She argued in her report that gender-neutral terms should be used so that both males and females were recognized as victims under the law and cited this particular proposed bill as one that did use gender-neutral terms appropriately.

This is the terminology from the bill, the highlighted part showing the 12 year old reference:

A person is guilty of an offense if he engages in a sexual act with another person, not his spouse, and (1) compels the other person to participate: (A) by force or (B) by threatening or placing the other person in fear that any person will imminently be subjected to death, serious bodily injury, or kidnapping; (2) has substantially impaired the other person's power to appraise or control the conduct by administering or employing a drug or intoxicant without the knowledge or against the will of such other person, or by other means; or (3) the other person is, in fact, less than 12 years old."

Ginsberg was not writing about the age of consent.

Snopes.com also debunked the claims against Ginsberg and published the portion of her report where she referred to the bill and wrote it "conforms to the equality principle," which you can see here.

The claims against her have been repeated for decades. During John Roberts' confirmation hearing in 2005, Sen. Lindsey Graham, R-S.C., accused Ginsberg of wanting to lower the age of consent, according to an article published on Slate in 2005.

Here is a link to the Washington Post transcript of the hearing, including what Graham said with a fuller transcript excerpt below:

Well, there are all kind of hearts. There are bleeding hearts and there are hard hearts. And if I wanted to judge Justice Ginsburg on her heart, I might take a hard-hearted view of her and say she's a bleeding heart. She represents the ACLU. She wants the age of consent to be 12. She believes there's a constitutional right to prostitution. What kind of heart is that?"

Many of the memes have cited an article titled, "SUPREME SWAMP JUSTICE: RUTH BADER SUPPORTS PEDOPHILIA?" published in 2018 on Fulcrum News.

Here is the mention of pedophilia in the article:

This past Sunday, after Qanon claims Ruth is not 'Here to Stay,' many issues have resurfaced; including previous works indicating her pro-pedophilia stance."

There is no evidence presented in the article or "previous works" cited indicating a pro-pedophilia stance.