Is there a new "Trumpcare" insurance plan -- credited to President Trump -- available that will "finally fix healthcare"? No, that's not true: An insurance plan promoted on Facebook as "Trumpcare" is not related to President Trump. Lead Stories has not examined the details and cost of the purported plan, but we have concluded the marketing for it is highly misleading. Facebook booted one "Trumpcare" page off the social platform, but a duplicate remained.

The claim appeared in a post (archived here) where it was posted by Trumpcare For America on September 14, 2020. It read:

And Citizens can now save big on Health Insurance!

Thanks to our President, health insurance is now more affordable than ever.

P.S. - Trumpcare may not be around forever, so act now to save on healthcare while you can!

There is no such thing as Trumpcare, although a clever online marketer decided to use the name for its policies. The posts promoting the product use President Trump's image and even thank him for making it possible. If you click on the post, you will be directed to a page that looks like this: 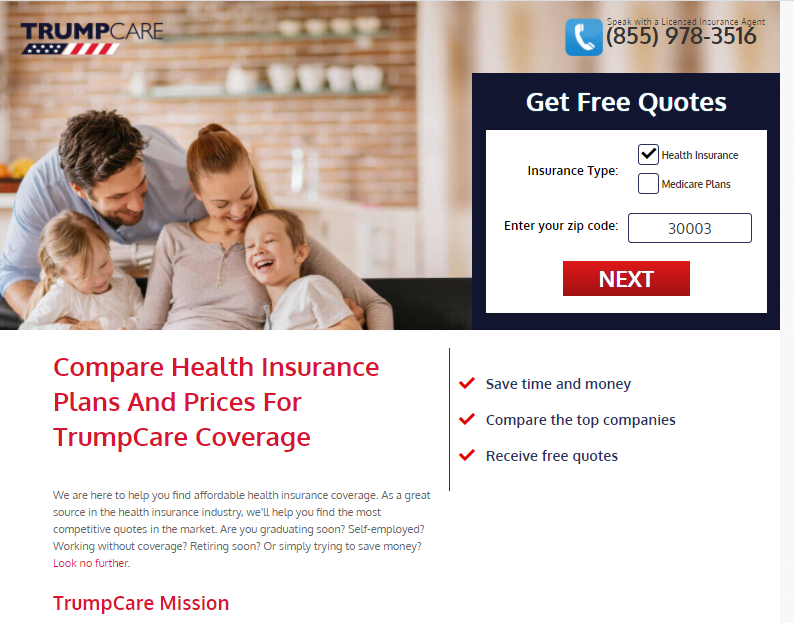 Newsweek reported on August 5, 2020, that Facebook removed the "Trumpcare for America" page from the platform:

Facebook has pulled a page promoting "Trumpcare for America" off its platform after the page was found to be in violation of the social media giant's "Unacceptable Business Practices" policies.

The social media page sought to promote the health insurance consultancy services of a company called Health Plans America, which appears to be based in El Segundo, California.

However, both the social media page and the company itself have promoted the services as being part of "Trumpcare," despite noting in a small disclaimer that the company has no affiliation with the government.

A Trumpcare for America page, created in March 2020, somehow survives and still promoted the misleading post a month after the Facebook action.