Did Pepsi omit "Under God" from the Pledge of Allegiance on a new can design? No, that's not true: This is a false claim that has been circulating since the early 2000s when it was Dr Pepper that released a can with the phrase, "One Nation...Indivisible." The Pledge of Allegiance actually ends, "one nation under God, indivisible, with liberty and justice for all."

So no one forgets: Don't buy the new Pepsi can coming out with pics of the Empire State building and the Pledge of Allegiance on them. Pepsi left out 2 little words in the pledge "Under God." Pepsi said they didn't want to offend anyone. So if we don't buy them, they won't be offended when they don't receive our money with the words "In God We Trust" on it.

This was the controversial Dr Pepper can design: 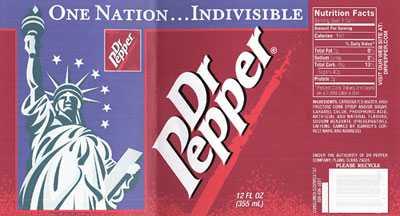 This NYC-centered, patriotic can design was created in 2001 following the September 11 attacks on the twin towers of the World Trade Center. The can was available from November 2001 through February 2002, according to a statement issued by Cadbury Schweppes, owner of Dr Pepper. The statement read in part:

Dr Pepper was not a PepsiCo product at the time nor is it today. Additionally, there are no Pepsi can designs from 2001 or 2002 on "CanMuseum.com" that feature the phrase, "One Nation...Indivisible."

"Under God" is a somewhat recent addition to the Pledge of Allegiance. It was not until 1954 -- 62 years after it was first written -- that "under God" was added. Before that, the pledge made no mention of God.