Do images from the September 29, 2020, presidential debate show that Joe Biden was wearing a communications device, perhaps to receive tips on what to say? No, that is not true. Social media posts are making this claim after a rosary, worn by Biden around his wrist in remembrance of his son, was seen poking from his sleeve -- and a crease on his shirt was taken by some to be a "wire." The rosary and the wire claims have been debunked by Lead Stories. A new claim links to, and suggests that Biden wore, a specific communications device. But such a device would be unmistakable.

The claim appears in a post (archived here) published to Facebook on September 30, 2020, under the page of "Jason Frank." The post, with a photo collage at the bottom, opens with:

Yea OK. If you'll buy that I got some ocean front property in Arizona for sale
If anyone has timestamps of these events from lastnight showing wires and all will u please leave in the comments for those that didn't see it or who are questioning the authenticity? Please and Thank you
https://www.allsafeindustries.com/store/p/9550-SEP110-Inductive-Loop-for-Covert-Communication.aspx?fbclid=IwAR2D8K9DtxgQgcHvzD2oZ0uhyc6Jxp-LYy1ZJdSLDgr80DIJA1iaZlnj97Y

Here is a screenshot of the full post, which includes a link to a Savox communications device and includes a report by Fox News that Trump's campaign wanted ears checked for devices before the Cleveland debate. Biden declined the request. 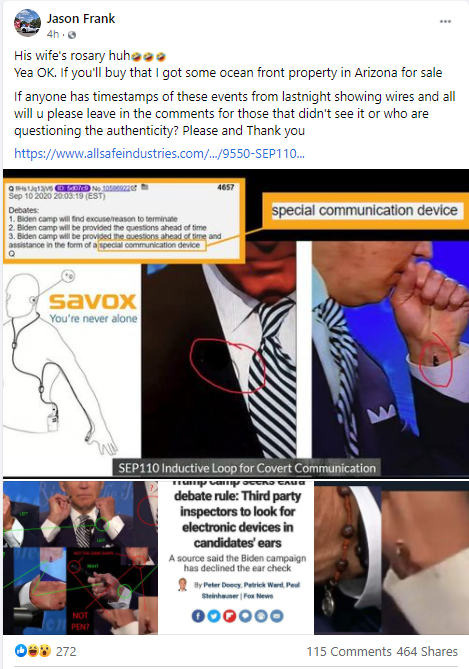 In the post's photos, a rosary is clearly shown at the bottom right. The rosary belonged to Biden's son, who died of a brain tumor -- not his wife, as the post states -- and was explained in an earlier Lead Stories article.

If Biden really wanted a device to secretly hear instructions from his aides or experts during the Cleveland debate, he could have just gone with some other option than has been posted -- such as this by Savox deep-covert earpiece.

No evidence exists -- in the posts or through any reports -- that Biden wore any device to aid him during the chaotic Sept. 29 debate. In fact, the debate was deemed such a mess, the Commission on Presidential Debates is considering new rules for any future Trump-Biden match-ups. According to NBC News, the CPD stated the following:

"Last night's debate made clear that additional structure should be added to the format of the remaining debates to ensure a more orderly discussion of the issues.

The CPD will be carefully considering the changes that it will adopt and will announce those measures shortly."