Did thousands of people witness a UFO over New Jersey September 14, 2020? No, that's not true: While there may have been some excitement and confusion about what they saw, it was not a flying saucer from outer space, but just one of the famous Goodyear Blimps above the MetLife Stadium in East Rutherford, New Jersey, providing aerial video of the Monday night NFL game. (Giants vs. Steelers)

The "UFO" sighting was reported by many witnesses who posted their videos to social media. An article (archived here) published by www.ufosightingsdaily.com on September 15, 2020, titled "Thousands witness UFO Over New Jersey Sept 14, 2020, 4 Videos, UFO Sighting News." compiled many of these eye witness videos, and Scott C. Waring summarized the event this way:

On Sept 14th, thousands of eyewitnesses saw a UFO over New Jersey area. The UFO which was about 30 meters across and hovered over various parts of the city. People were seen on the freeways pulling their cars over to the side of the road and watching this UFO in the distance. The object has a glowing light for a center, similar to the military TR3B, and strangely enough...its not a disk, but a triangle. That fact that the event took place is obvious from all the videos currently being uploaded as we speak.

Why is there no military jets intercepting this UFO? Its because it may be an actual US military TR3B or one of the evolutions of it. There are nine US military bases in New Jersey...that makes it highly unlikely that a UFO would not be intercepted by jets within minutes...unless of course the militaries primitive radar could not even pick it up. If thats true, then thats just embarrassing for the US military intelligence. Something this big...no jets coming? It just has to be a TR3B being flown...oh...and the TR3B is undetectable by todays radar from what I hear. So either the US is trying to out its top secret space craft to the public....or aliens are trying hard to make humans aware of them. I wish there was a video of this showing up or leaving. Hopefully more videos will be uploaded in the next few days.

The mass excitement over the unusual hovering craft was likely increased by shared experience. On Route 21 in Passaic, motorists did not just slow down, but they pulled over, parked on the shoulder of the divided highway and got out of their cars to wonder at the sight, according to eyewitness accounts posted online.

The dim light of dusk may have contributed to the confusion about what they were seeing. The color of the grey sky perfectly matched the grey color of the top of the blimp and disguised the true outline. The dark blue graphic stripe made the illusion of an elliptical shadow under a flying saucer. And if that weren't enough, the Goodyear Blimp is fitted with a net of LED lights, for a customizable display called Eaglevision. From Route 21, the scrolling display of text was not quite legible, but the bright blue glow did look out of this world!

Not too far away, and under slightly better lighting conditions, blimp fan Lino Brescia heard a sound and went outside. He captured some photos of the blimp right over his neighborhood:

Growing up I would see the Blimp floating over NYC all the time, it is nostalgic for me to see it. It is rare to see it nowadays, so when I heard an odd sound, I went outside. It was literally over my house. I am 2 miles from MetLife Stadium. I have a bunch of other photos and videos. The fact that people think it was a UFO is ridiculous LOL.

Below is a still from Lino Brescia's video where the blimp's gondola is clearly visible. It's even possible to make out the Eaglevision netting on the side of the blimp and some of the scrolling text. As the daylight faded, the LED light display appears much brighter in this comparison with two stills from Rt 21 footage that was posted on Youtube and included in the www.ufosightingsdaily.com article. 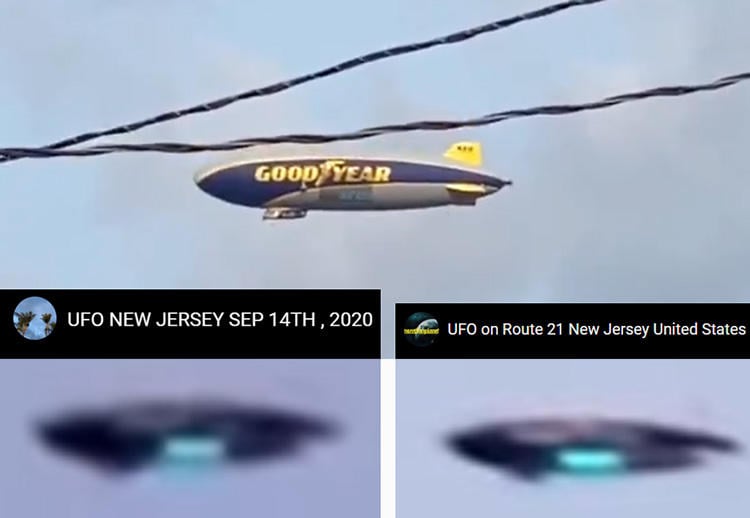 Below is a graphic showing the path of the blimp (flight N2A) on the night of September 14, 2020, from Flightradar24.com. The MetLife Stadium is within the Meadowlands Sports Complex at the bottom center of the map. Rt. 21, where people were pulling over to take a look at the unusual craft in the sky, runs along the Passaic River, on the left side of the map. 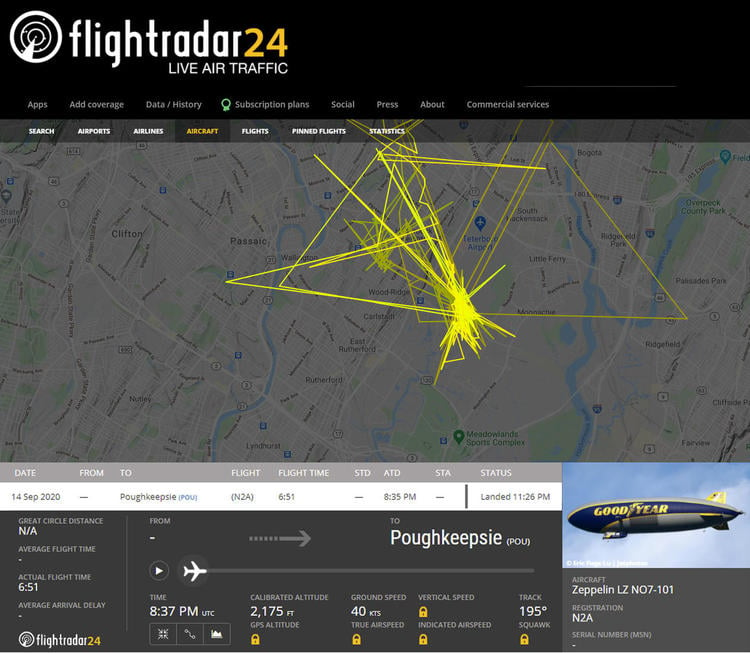 This video is a compilation of several videos of the blimp shot from Rt 21. (Warning: Lots of expletives of amazement as the video opens)