Does President Trump have 26 active lawsuits against him alleging sexual assault, including seven that accuse Trump of sexually abusing children? No, that's not true. While some reports have indeed put the number of allegations against Trump at 26 since the 1970s, not all have been filed in court. Also, there is only one claim that Trump abused a child -- and that suit, from a woman who had said the sexual assault happened when she was 13, was dropped in 2016.

did u know that trump has TWENTY-SIX SEXUAL ASSAULT ALLEGATIONS filed in court?? and SEVEN are against CHILDREN? How did we allow this monster to be our president? These types of records wouldn't even hold up for a job in the food industry." 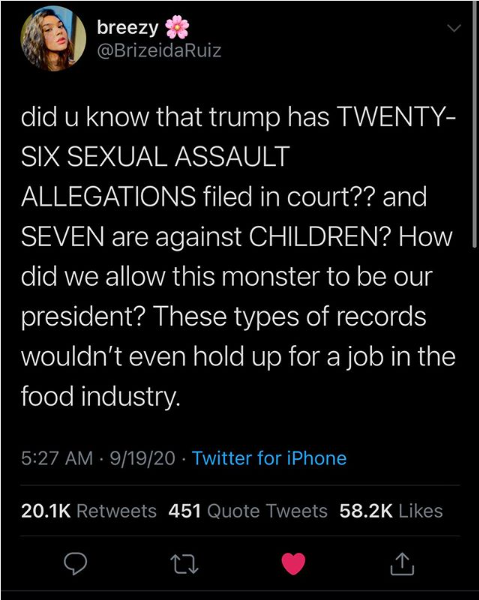 did u know that trump has TWENTY-SIX SEXUAL ASSAULT ALLEGATIONS filed in court?? and SEVEN are against CHILDREN? How did we allow this monster to be our president? These types of records wouldn't even hold up for a job in the food industry.

According to a Business Insider story from Sept. 17, 2020, which put the number of women who have accused Trump of some manner of sexual assault or misconduct at 26 (Others have listed it lower, at 18):

Trump has broadly dismissed the allegations, which include harassment, groping, and rape, as "fabricated" and politically motivated accounts pushed by the media and his political opponents. In 2016, he promised to sue all of his accusers. In some cases, Trump and his lawyers have suggested he couldn't have engaged in the alleged behavior with certain women because he wasn't physically attracted to them.

"Every woman lied when they came forward to hurt my campaign," the Republican presidential nominee said during a 2016 rally. "Total fabrication. The events never happened. Never. All of these liars will be sued after the election is over."

Here is a tweet from Trump promising to sue his accusers from just before the 2016 election that put him in office:

GETTYSBURG, Pa. -- Trump addresses the women accusing him of sexual assault: "all of these liars will be sued after the election is over" pic.twitter.com/NYGUV1xuIF

One of those accusers claimed she was 13 when Trump and convicted sex offender Jeffrey Epstein, who died in his cell at Manhattan's Metropolitan Correctional Center last year, sexually assaulted her in 1994. But that suit was dropped just days before the 2016 presidential election. It was the second time the suit had been brought and dropped.

Much attention on Trump's alleged misconduct or assaults have resurfaced after former model Amy Dorris, who claimed to The Guardian in a Sept. 17, 2020, story that Trump accosted and assaulted her at the 1997 U.S. Open tennis tournament in New York City inside his VIP box.

Here is ABC's broadcast about the allegations and Trump's denial of them: