Were U.S. Postal Service workers who opposed Republicans involved in the case of nine mail-in ballots found in an elections office waste basket in Luzerne County, Pennsylvania? No, that is not true: The Pennsylvania incident was found to be caused by confusion on the part of an elections office worker on the procedure for handling "naked ballots," those that arrive in the mail not in a second sealed envelope. A judge had just ruled -- in a decision that the Trump campaign requested -- that such ballots could not be counted in Pennsylvania. Lead Stories previously explored that investigation in a debunk titled Fact Check: FBI Did NOT Say Military Mail-In Ballots Were Found In A Pennsylvania Ditch.

The claim that postal workers were involved in the discarding of the ballots appeared in an article (archived here) published by DiamondAndSilk.com on September 28, 2020, under the title "Democratic Insider: Anti-Trump Postal Workers In GOP Neighborhoods Throw Mail-In Ballots In The Garbage." It opened:

A Democrat operative revealed that the United States Postal Service (USPS) workers who share a mutual disdain for the 45th President, Donald Trump, will sometimes help election fraudsters by throwing in the garbage mail-in ballots from Republican-heavy neighborhoods, according to Breitbart News.

A Democrat operative told the New York Post's Jon Levine a number of stories in which insiders like him lead teams of fraudsters to commit election fraud by paying homeless voters off, taking advantage of the elderly, posing as registered voters, and printing up fake ballots.

Here is how the story appeared on Facebook at the time of this writing: 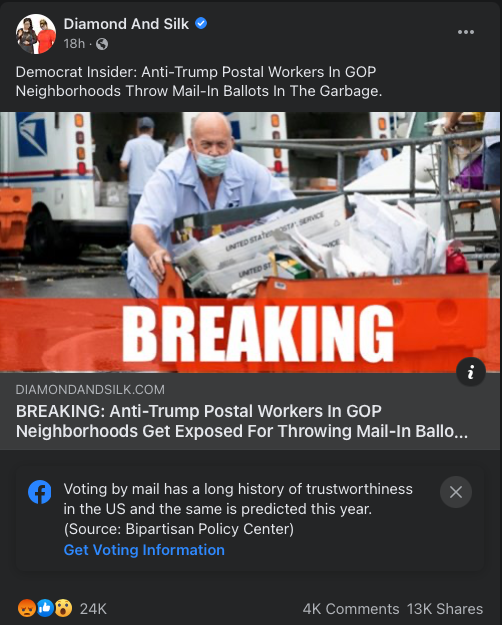 This debunk is not judging the claims made by the unnamed "Democratic insider" concerning allegations of mail-in ballots in New Jersey being stolen and trashed by postal workers in New Jersey, as it would be difficult to investigate vague statements by an anonymous source. We are debunking Diamond And Silk's claim that the nine ballots in Pennsylvania involved the same "disturbing tactic."

Diamond and Silk's article was an inaccurate re-write of a Breitbart article, which itself was a re-write of a New York Post story from a month earlier. With the passage of time, some important words were dropped (such as potentially) and new words were added.

In the middle of the section that repeated the New York Post allegations that illegal vote harvesters were paying off the homeless to vote, taking advantage of elderly people and printing phony ballots while trashing ballots in heavily Republican neighborhoods of New Jersey, the Diamond And Silk article added quotes from a Department of Justice statement related only to Pennsylvania:

"At this point, we can confirm that a small number of military ballots were discarded," DOJ officials said in a statement:

"Investigators have recovered nine ballots at this time. Some of those ballots can be attributed to specific voters and some cannot. Of the nine ballots that were discarded and then recovered, seven were cast for presidential candidate Donald Trump. Two of the discarded ballots had been resealed inside their appropriate envelopes by Luzerne [County] elections staff prior to recovery by the FBI and the contents of those 2 ballots are unknown."

A later clarification made it clear the ballots were discarded by a worker error and not by someone trying to steal votes. Postal workers were never mentioned, since the ballots had been properly delivered.

Yet, the Diamond And Silk story then connected the New Jersey postal worker allegations with the Pennsylvania incident"

The disturbing tactic was most recently used in the swing district of Luzerne County, Pennsylvania, where the Federal Bureau of Investigation (FBI) and Justice Department (DOJ) say mail-in ballots by members of the United States Armed Forces cast for Trump were "discarded."

Contrary to the Diamond and Silk headline, "anti-Trump postal workers" were not implicated.

NewsGuard, a company that uses trained journalist to rank the reliability of websites, describes diamondandsilk.com as:

A video site with a conservative, pro-Trump perspective that has published false and unsubstantiated claims. The site has gotten much notice due to the high profile of the two sisters who run it.