Did President Trump say he caught COVID-19 by forgetting to wear a mask at a Ku Klux Klan rally in Florida? No, that's not true: The claim was made in a satire article that used a satire photo from 2016. It is a real photo, but features a Donald Trump look-alike posing with a group of people dressed as Klansmen at a photo shoot, not a real Klan rally. This photo is part of a series by British Artist Alison Jackson which features one of several Donald Trump look-alikes in various scenes.

The story appeared as an article (archived here) where it was published by HalfGuarded.com on October 2, 2020 under the title, "Trump Blames Forgetting To Wear Mask For Contracting Covid-19." It opened:

Donald Trump shocked the world when he announced that he and First Lady Melania, tested positive for Covid-19. While many wonder how this happened, Trump feels his failure to wear a mask at a rally he attended is to blame.

While attending a Ku Klux Klan rally in Florida, which somehow has less racists in attendance than most Trump Rallies, Trump forgot to wear his mask.

"My bad, the boys had their mask on and I forgot mine. That's on me. Remember folks, always wear your mask at these KKK rallies, you don't want anyone to catch Covid-19, or catch you celebrating white nationalism." Trump said on Twitter.

This is what the satirical article and photo looked like at the time of writing: 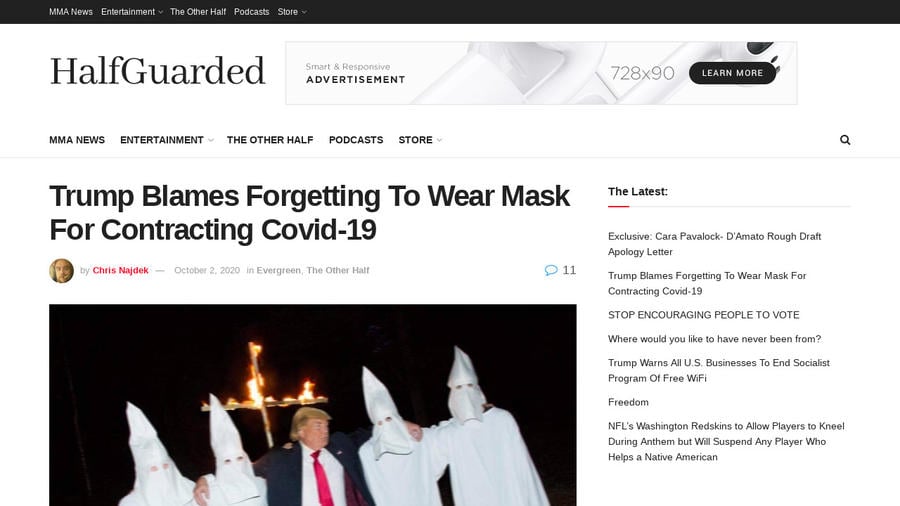 The satire article also contains an image of a fake tweet allegedly from the verified Twitter account of the President where that quote is said to have originated.

There are no spelled out satire disclaimers on the HalfGuarded website, but there are many contextual clues that this website is satire. Even satire stories sometimes use real photos, so clarification that this is not a photo of President Trump is being offered.

The nighttime photo of the Donald Trump look-alike arm-in-arm with actors in Ku Klux Klan hoods and robes is illuminated by a burning cross and a flash. The picture is out of focus and the scene is not square in the frame. Allison Jackson's artful fakery extends from the models and their costuming to the way the photo seems to have been snapped by an amateur.

There were many articles written about this series of photos by Alison Jackson when they were released in late 2016. Some of the stories mentioned the risk she was taking by featuring such noteworthy people in her satirical photographs, and the difficulty she had finding a publisher for her book. In this December 10, 2016 article from Independent.co.uk "British artist continues to publish spoof photos of Donald Trump despite risk of being sued." Jackson said:

Ms. Jackson also stressed her work is not just about the President-elect, or the other celebrities she pokes fun at.

"It is about how it's very difficult to tell the difference between what's real and what's not real in media imagery, or indeed any imagery at all," she said.

"It's very, very difficult to try and work out what's authentic and I'm saying you can't rely on your own perception in imagery. That's my point."

On Jan 20, 2017 Snopes published a debunk about this staged scene, "Does This Photograph Show Donald Trump at a KKK Cross Burning?"

Maya Margit of i24NEWS interviewed Alison Jackson in Israel in 2017 in this embedded video: