Did Joe Biden use an iPad to feed him answers during the debate? No, that's not true. A video posted to social media claims to show an aide picking up an iPad from the podium where Biden stood during the debate with Donald Trump on October 22, 2020. CSPAN video from the event shows an aide picked up a paper notepad - not an iPad - and carried it off stage. An aide for Trump also picked up a similar notebook from his podium, but that was omitted from the video.

The claim appeared as a post (archived here) on Facebook on October 22, 2020 under the title "Did a Biden staffer just grab an iPad off his podium?" It opened:

This shit's too funny. Watch him grab his notes and then watch one of his staffers go and grab his iPad

It was also shared on TikTok:

The man narrating the video said this about what he was seeing on stage after the Presidential debate in Nashville, Tennessee on Thursday, October 22, 2020.

This shit's too funny. Watch him grab his notes and then watch one of his staffers go and grab his ipad hold on got them notes...take that off. Now, watch stage right...hold on...no one's going to Trump's. Let me grab that ipda that's giving you all the answers. It's gone."

CSPAN footage of the aides picking up the notepads begins at 1:58:00 in the CSPAN video.
Beginning at 1:58:10 an aide walks out to Trump's podium and picks up a notepad and takes it off stage.
At 1:58:13 an aide walks to Biden's podium and picks up a notepad that looks exactly the same as the notepad picked up from Trump's podium. Neither aide picked up an iPad.

Here are screenshots of the aides picking up the identical notepads. 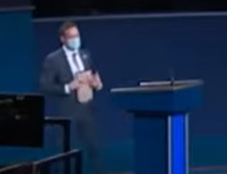