Did someone who couldn't afford health care under Barack Obama's Affordable Care Act get penalized $10,000, which was then used to pay for others' free health care? And is it true that Trump "ended that theft?" This is a mixture of false and true. President Trump and Congress did chip away at the Affordable Care Act (ACA), erasing tax penalties for non-insured people -- apparently the "theft" referred to in the claim -- and Trump has sued to end it. But the ACA is still active. For someone to be penalized $10,000 under ACA, they would have to have earned upward of $400,000 in a single year, which means they would be unlikely to be unable to afford health insurance.

The claim is found in a post (archived here) published to Facebook on October 20, 2020. The post on the page "Capitalism" is just a picture of a car with following written on the rear window:

Because our family couldn't afford health insurance, Obama/Biden penalized us ~ $10,000, then took that $10,000 and used it to pay for others' free Obamacare. Trump ended that theft."

The post, which is also found on Instagram, is misleading by painting a seemingly impossible scenario. While it is true the tax penalty -- what the claim calls theft -- ended under Trump and a Republican-controlled Congress, a penalty of that magnitude would only be chargeable to a family in the uppper income range. That is not made clear in the post, which offers no evidence for its claim of a $10,000 penalty and inability to afford health insurance.

According to this explanation on California's health care site:

President Donald Trump with the help of Congress has rescinded the penalty of the Affordable Care Act beginning on January 1, 2019. For those uninsured in 2018, they will still have to pay the penalty.

According to the Affordable Care Act, if you do not get health insurance coverage, you will be penalized at tax time. To avoid a penalty for no health insurance, you must have either a valid exemption or you must be enrolled on a qualified health plan. If you are uninsured for part of the calendar year, you may still be exempt from a penalty so long as you are uninsured for less than three consecutive months. You may also be exempt from a penalty if you are part of a Federally-recognized American-Indian tribe, are enrolled on a grandfathered plan*, or are enrolled in a Health Care Sharing Ministry (HCSM).

According to the government's site, HealthCare.gov:

The fee is calculated 2 different ways -- as a percentage of your yearly household income, and per person. You'll pay whichever is higher.

If you have coverage for part of the year, the fee is 1/12 of the annual amount for each month you (or your tax dependents) don't have coverage. If you're uncovered only 1 or 2 months, you don't have to pay the fee at all. Learn about the "short gap" exemption."

Here is the chart explaining how fees worked under the modified ACA on the government site: 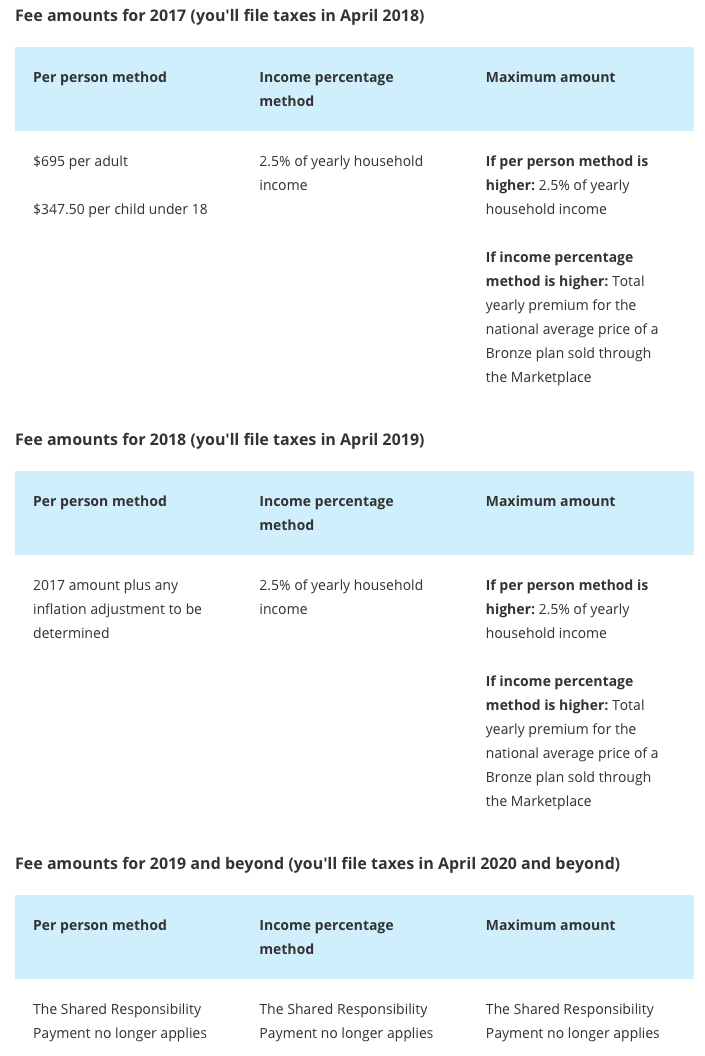 The post does not say how many people were in the family or how many years they were taxed for the insurance act. Assuming it's one income-earner, the chart makes clear that someone would have to earn $200,000 over two years, or $400,000 in one year, to face a penalty of $10,000 before 2019. Such a person would not likely need or qualify for the ACA, the largest overhaul of U.S. health care policy since the 1960s. Check this page of HealthCare.gov for eligibility.

Let's say for a family of four making $200,000 to $400,000. That would knock you out of contention for the premium tax credit...you're not getting any premium tax credit or any financial help through the marketplace...They could still get health coverage through the marketplace, but they wouldn't qualify for the Affordable Care Act because their income would be too high."

This YouTube video explains tax penalties under the Affordable Care Act prior to 2019: