Have other countries proved the U.S. Food and Drug Administration endangered thousands of lives by withdrawing approval of hydroxychloroquine as a treatment for COVID-19? No, that's not true: The findings of clinical studies in the U.S. and overseas show the anti-malarial drug is ineffective against COVID-19. The anti-abortion website saying otherwise bases its claim on an essay published by a history major with no medical credentials. Other versions of the claim are based on the erroneous assumption the drug is widely used in Africa to treat malaria.

The claim appeared in a September 26, 2020, article (archived here) published by Lifesite.com under the title "Report: Other countries faring better against COVID due to hydroxychloroquine, not lockdowns." It opened:

The U.S. is an international outlier on HCQ. Right now, doctors around the world are prescribing HCQ to treat COVID-19 outside of hospitals, as well as prophylactically to prevent infection among healthcare workers and vulnerable populations.

Readers saw this version on the LifeSite home page: 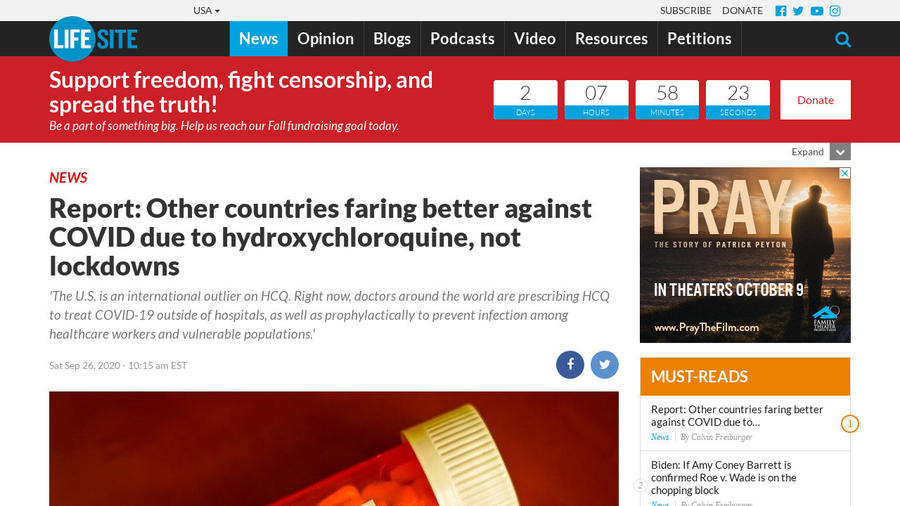 The "report" referred to by LifeSite is a term-paper-style essay: "Hydroxychloroquine And The Burden Of Proof" with no listed author, posted on another website: The Economic Standard. The editor-in-chief of that website, Erik Sass, lists as credentials a bachelor of arts in history and a master of arts degree in journalism. He prefaced the essay with this note: "This paper was written in close collaboration with practicing physicians and infectious disease specialists from across the United States and around the world" but no medical professional has taken responsibility for the essay.

Sass's webpage declares other countries are eagerly adopting hydroxychloroquine for COVID-19 treatment and that: "HCQ should be more widely recommended, prescribed and promoted to treat COVID-19 right now." Lead Stories reached out to Sass via Twitter and email to ask who wrote the essay and which doctors support its conclusions. This report will be updated, if appropriate, when Sass responds.

In a Septmber 30, 2020, phone interview with Lead Stories, Dr. Wesley Self of Vanderbilt University School of Medicine, who ran the major hydroxychloroquine study in the U.S., said there is enough independent corroboration of his findings that he is now comfortable being unequivocal about hydroxychloroquine:

We saw no evidence whatsoever of it being useful, nor harmful."

Self said that while there is likely room to debate the effectiveness of social distancing and "lockdowns," a scientific approach would not compare the impacts lockdowns and a drug have on the spread of the disease, since those are very different interventions.

Self, who holds a master's degree in public health from Vanderbilt, an M.D. from the University of Virginia and was selected as chief resident/emergency medicine at Northwestern University, said there is a growing international consensus hydroxychloroquine does not work for COVID-19 and points to the following:

Self confirmed it's part of his job to review new science journal articles daily and said he is not aware of any published research to support Sass and LifeSite's claims that the U.S. is out of step with the rest of the world on this:

I would be eager to evaluate the data from the other countries carefully. I'm not aware of data that is demonstrating great success in treating COVID-19 with hydroxychloroquine."

Lead Stories' questions to Sass included the source of funding for production of The Economic Standard's essay. The website's "About Us" page does not list funders, which is contrary to the transparency guidelines of the ethics code of the Society of Professional Journalists and integrity-of-journalism practices promoted by the Institute for Nonprofit News.

The claim that the malarial drug either prevents or effectively treats COVID-19 has circulated, without evidence, since early in the pandemic.

Hydroxychloroquine advocates have pointed to the relatively low COVID-19 infection rates in African countries as evidence of the drug may work against COVID. "If you look [at the] countries where malaria is more prevalent and countries where COVID-19 infections are prevalent, you will find a striking difference," Dr. David Nazarian told foxews.com for an April 8, 2020, article. "This correlation needs to be explored further as this is not just a mere coincidence," said Nazarian, who is trained in internal medicine.

But hydroxychloroquine use in Africa may not be as widespread as Nazarian and others assume.

"Hydroxychloroquine is NOT used for the treatment of malaria in most of Africa," says Prof. Salim S. Abdool Karim, director of a U.S. National Institutes of Health research center in Durban, South Africa, and a professor of global health at Columbia University's School of Public Health. In a September 2, 2020, email to Lead Stories, Karim said malaria is widely resistant to chloroquine:

Artemisinin is used to treat malaria. Hydroxychloroquin is used in a small number of patients for the treatment of auto-immune diseases - too small a group to have any impact on Covid-19."

Karim, who is a member of the African Task Force for Coronavirus organized by the U.S. Centers for Disease Control and Prevention, said it's too soon to know why some nations on the African continent have relatively low infection rates. "It has no easy or obvious answer - in short, no-one really knows but most have a speculative opinion on why this is so."

The state of the science was already muddied by political pressure from President Trump, who announced in May he was taking daily doses of hydroxychloroquine as a preventive measure.

Controversy flared when one of the world's oldest and most-cited medical journals first warned against the drug and then retracted that paper. The Lancet had, in May, published research that indicated hospital patients taking hydroxychloroquine for COVID-19 were more likely to die in the hospital than those who did not take it. But on June 13, 2020, The Lancet reversed itself, citing serious questions about Surgisphere, the private database on which the study's conclusions had been drawn.

HYDROXYCHLOROQUINE & AZITHROMYCIN, taken together, have a real chance to be one of the biggest game changers in the history of medicine. The FDA has moved mountains - Thank You! Hopefully they will BOTH (H works better with A, International Journal of Antimicrobial Agents).....

NewsGuard, a company that uses trained journalist to rank the reliability of websites, describes lifesitenews.com as:

A website that publishes news and opinion on anti-abortion activism and legislation, which has repeatedly misstated medical research about abortion.