Did OAN reporter Chanel Rion post messages on the 4Chan's forum promising a pending "big news dump" about Joe Biden that would result in the election being postponed? No, that's not true: Rion, who works for One America News Network, made it clear in a tweet posted on October 16 that forum posts purporting to be from her were fake.

The fake promises appeared in a series of posts (archived here) on 4Chan on October 15, 2020, under the account name ChanelOAN. The first entry read:

He's honestly one of the most corrupt VPs in American history. There's plenty of corruption on both sides of the isle but the DNC is just so much more infinitely corrupt they make Trump look like a saint.
Twitter will go down again tomorrow. The big news dump will follow shortly after.
Dems might even have Facebook and YouTube down as well. They are really trying to "soften the blow" of what's coming tomorrow.
I'm going to come back here shortly before then with a heads up and early exclusive info.
See you then boys.
God Bless

This is what some of the 4Chan posts looked like: 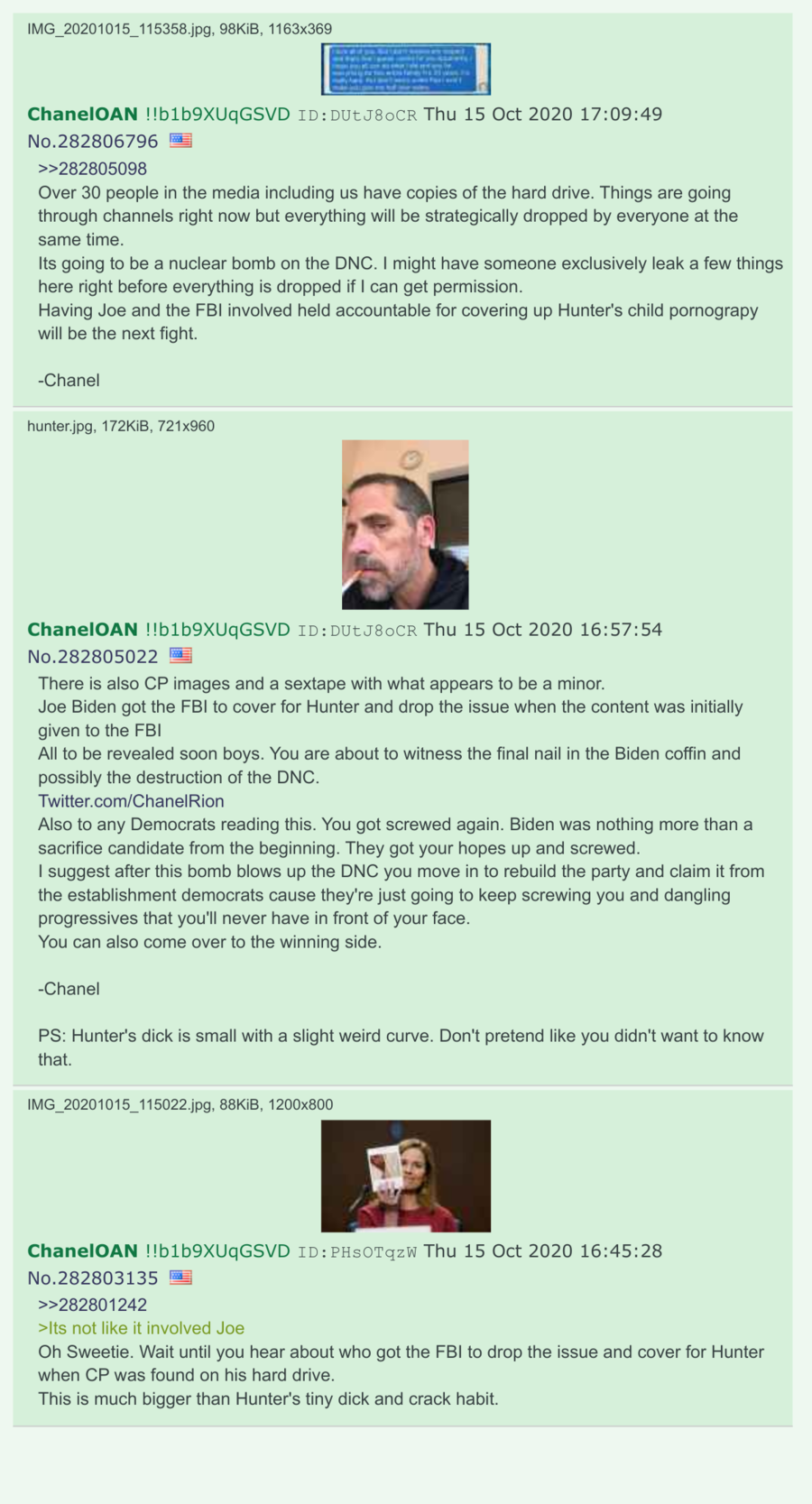 One post suggested the revelations would delay the November 3 general election:

The election will be postponed as new ballots are sent and everything is set. Biden will most likely withdrawal do to "Covid" where he'll quietly sneak out of the spotlight for the time being
There appears to be internal fighting right now as to whether replace Joe or Have Kamala as president candidate and replace VP
Democrats seem to know that Kamala can't beat Trump on her own but they know progressives will be pissed when they replace Joe with someone other than Bernie. The fair pick as he was runner up but dems will never allow it. Even if they have to lose the election to keep Bernie out.
They appear to be eyeing Warren to replace Biden but a two female ticket would be almost impossible to win. Mayor Pete could possibly be brought in to Be Kamala's VP instead
Overall its looking like dems are in their "Fuck it, well try again in 2024" phase
I'll have a special report on this tomorrow as we learn more.
Make sure you follow me and OAN on Twitter and Youtube

After Rion learned about her name being used in fake posts, she tweeted a denial:

For the record: I do not post on chat forums.

I understand there are hoaxers posing as me.

I'm on this story. You'll hear me here and @OANN exclusively.