The forced vaccination claim appeared in a September 16, 2020, article (archived here) published by BeforeItsNews.com, titled "The Government Has Released Their Initial Plans To Force a Vaccine on EVERYONE" which opened:

Earlier today, the Trump administration released its plans to vaccine everyone in a short time. Three potential vaccines are currently in Stage 3 trials in the United States and could be ready in weeks, President Donald Trump said Tuesday. Time is running out. And Trump has the military lined up..."

Earlier today, the Trump administration released its plans to vaccine everyone in a short time. Three potential vaccines are currently in Stage 3 trials in the United States and could be ready in weeks, President Donald Trump said Tuesday. Time is running out. And Trump has the military lined up...

The U.S. military's role is strictly limited to support for the distribution of vaccines that can't be distributed by normal means, Department of Defense Spokesman Chuck Prichard wrote in an October 2, 2020, email response to Lead Stories:

Our best military assessment is that there is sufficient U.S. commercial transportation capacity to fully support vaccine distribution. There should be no need for a large commitment of DOD units or personnel to support the nationwide distribution of vaccines. Any DOD required support would be by exception. For example, military air assets may be called upon to deliver vaccines to a remote location only if no other means of transportation is feasible."

Prichard said there is no other role for military personnel: "DOD has no plans regarding vaccine distribution beyond what I have described above and what is stated in the HHS/CDC distribution plan." Prichard, asked if the military will coerce citizens into being vaccinated, was direct. "The answer is no," he wrote.

Details of the military's role in distribution are covered in this news release and the following infographic, he noted. 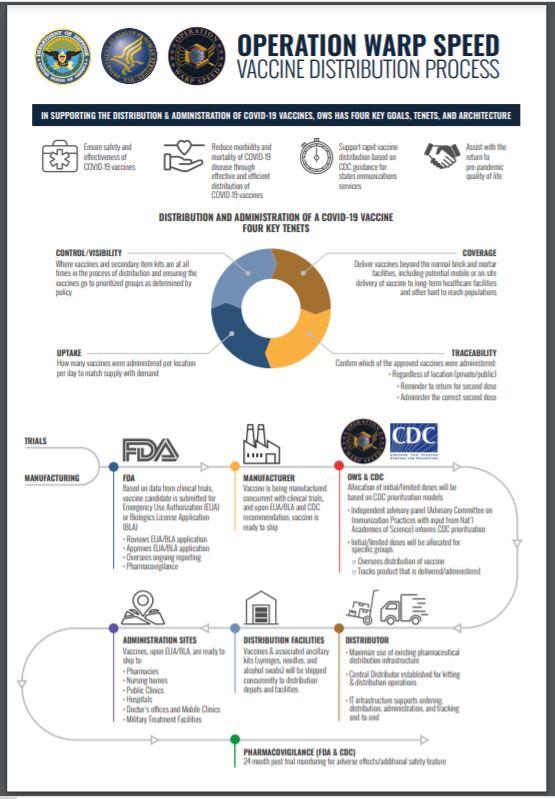 Dr. Anthony Fauci, director of the National Institute of Allergy and Infectious Diseases and a member of the White House Coronavirus Task Force, has said repeatedly there is no plan to make COVID-19 vaccine mandatory. At an August 19, 2020, event at George Washington University he was asked if the federal government plans to force vaccination and Fauci said it does not:

No. Definitely not. You don't want to mandate and force anyone to take the vaccine. We've never done that. You can mandate certain groups of people, like health workers, but the general population you cannot...We don't want to be mandating from the federal government to the general public. It would be unenforceable."

Lead Stories did not uncover any reference to forced vaccination in the national vaccine distribution plan referred to in the BeforeItsNews article, using the terms "require, force, consent and mandatory" and other words that would be needed to describe forced vaccination. The plan, "COVID-19 Vaccination Program Interim Playbook for Jurisdiction Operations," is available online.

Following are screengrabs of the results of searches for those words the document.

The word "mandatory" does not appear in the document. 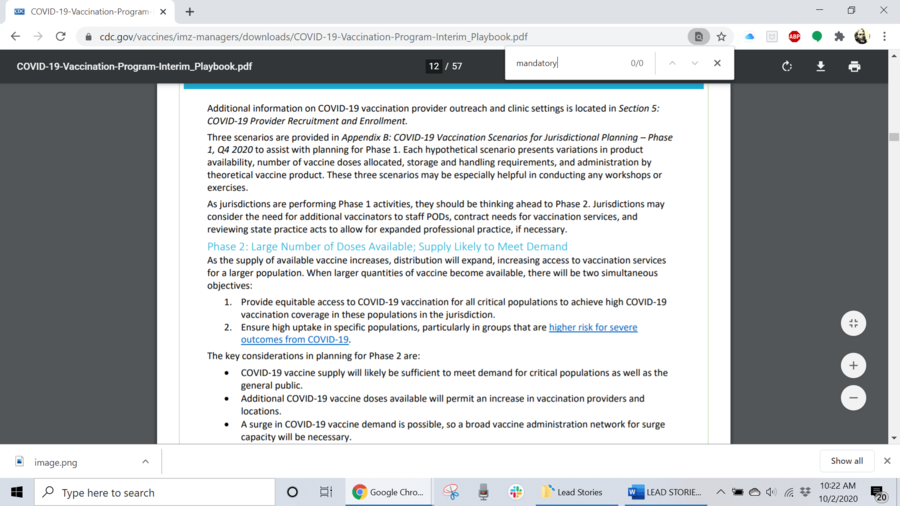 The word "force" mostly showed up in reference to planning for "workforce" requirements.

"Required" showed up 52 times, as the plan requires states to manage numerous safety and record-keeping efforts.

There is no reference in the document to "consent" nor the lack thereof.