Did the large image of the Joe Biden and Kamala Harris logo projected onto a Harley-Davidson location in Milwaukee indicate the motorcycle manufacturer's endorsement of the Democratic presidential nominee? No, that's not true: Harley-Davidson said it is "apolitical" and the image was projected without its consent. It was in fact set up by the United Steelworkers union.

If anyone wants to trade in there Harley-Davidson come see me I've got plenty of other cruisers!!!!!!! 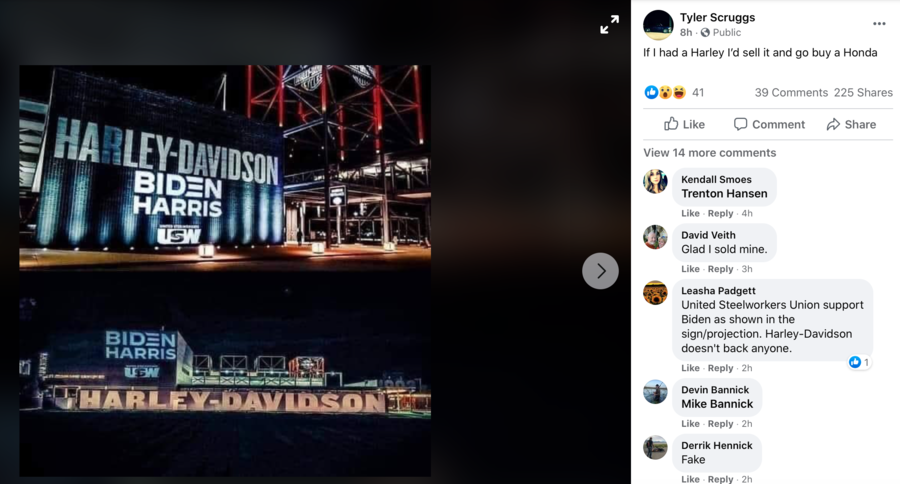 Lead Stories contacted Harley-Davidson on October 20, 2020 and was directed by a member of its media relations team to the company's post on Twitter, in which it said,

The image projected on the Museum was done without our consent. Harley-Davidson is apolitical.

Hi, the image projected on the Museum was done without our consent. Harley-Davidson is apolitical.

Similarly, Lead Stories conducted a Google search and did not find any indication that Harley-Davidson has endorsed either presidential candidate.

The bat-light style logo has been repeatedly used by the United Steelworkers, an industrial union with about 1.2 million members across North America. It has projected the Biden-Harris logo, along with the union's own logo, in other high-profile buildings, whose owners also have not endorsed the Democratic candidate, including the Trump Tower in Chicago.

This is a USW project not undertaken in coordination with any other organization. The union has been using the light as an exciting and Covid-friendly way to start conversations about the importance of the election at a time when face-to-face contact has necessarily been limited.

The Chicago Tribune reported the union, which has endorsed Biden's candidacy, has also projected the light on Wrigley Field in Chicago, Lambeau Field in Wisconsin and Terminal Tower in Cleveland.