Is Lady Gaga a high-ranking satanic witch? No, that's not true. Pop star Lady Gaga was described in a social media post as being the "highest ranking satanic witch in the music and entertainment industry," after she appeared at a campaign rally for Democratic candidate Joe Biden on November 2, 2020. The accusation is part of a conspiracy that has persisted against the singer, but is not based on any actual evidence.

The claim appeared as a post (archived here) where it was published by "Jeremiah Johnson Ministries" on November 3, 2020. It opened:

Just in case you missed it, Lady Gaga joined Joe Biden on the last day of his campaign yesterday. She is undoubtedly the highest ranking satanic witch in the music and entertainment industry.

Just in case you missed it, Lady Gaga joined Joe Biden on the last day of his campaign yesterday. She is undoubtedly the highest ranking satanic witch in the music and entertainment industry. If you were waiting to decide if he worships at the altar of Baal, wait no further.
These demonic spirits of witchcraft, sexual perversion, and child sacrifice are seducing too many Christians at an alarming rate. This man and woman are openly inviting the American population to drink from their couldron of demons.
Pray with me that today that delusion and spiritual blinders be removed from eyes at the ballot box. May God have mercy on our nation once again!
There is a battle for the soul of our nation alright!
-Jeremiah Johnson
For more go to: www.jeremiahjohnson.tv."

Similar claims were shared about Lady Gaga on social media, invoking Jesus and noting her "close connections with Marina Abramovic":

If you come against this in Jesus name like this status. Lady Gaga joined Joe Biden at the last minute. Lady Gaga is a...

There is no evidence that Lady Gaga is a high-ranking satanic witch.

A photograph of Lady Gaga with performance artist Marina Abramovic at an art exhibit has been the basis for the wild conspiracy theory that she is satanic. The two were accused of drinking blood from a dead body -- and being "Satanic Democrat Pedophile Cannibals," as Lead Stories previously reported. 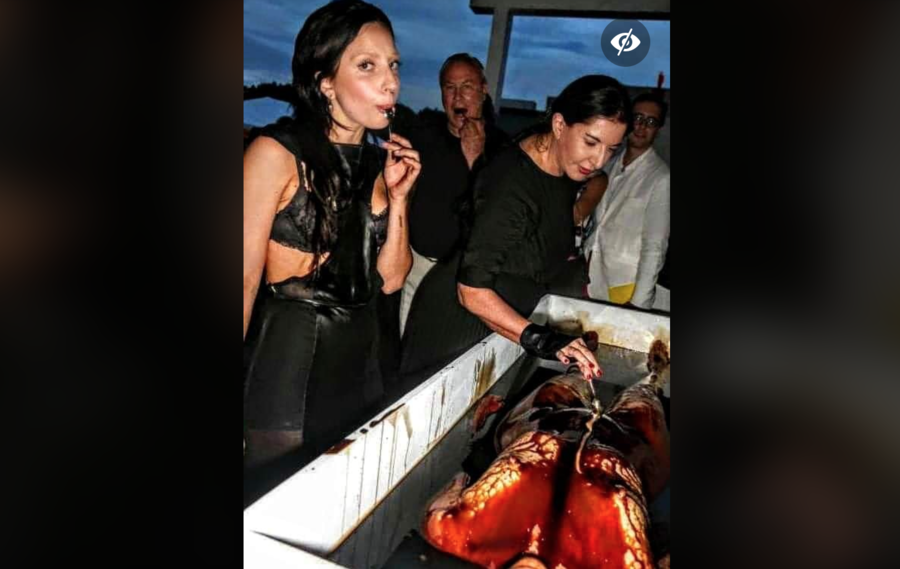 The picture is from July 27, 2013, taken at the 20th Annual Watermill Center Summer Benefit in Water Mill, New York. Professional photography agency Getty Images owns the photograph. They were not drinking real human blood but fake blood as part of "performance art" at the event. Lady Gaga was promoting her new album ARTPOP at the time, according to MTV News.

The drinking blood conspiracy stemmed from when Hillary Clinton's presidential campaign chairman John Podesta's emails were hacked and released by WikiLeaks in 2016. Abramovic was emailing Podesta about a dinner that was twisted in claims that was hosting "spirit cooking" dinners, which turned into the "Pizzagate" conspiracy, which was debunked by the New York Times in a story.

In April 2020 Abramovic explained the emails to the New York Times in an interview where she denied the satanic connection.

She said she thought the conspiracy theories were "just insane."

"I am an artist, not a satanist!" she insisted.

She also told the NY Times that she has received death threats over her art.