Does a YouTube analysis of the votes in four Michigan counties prove election software transferred 69,000 votes from President Donald Trump to Joe Biden? No, that's not true: Based on an analytical method created by a non-statistician, this conspiracy theory does not buttress its DIY analysis with the work of a professional statistician, nor with real-world evidence that a person or persons rigged election software in Michigan in favor of Joe Biden. Election officials, election software purveyors and federal cybersecurity experts have all said vote-switching is impossible and that canvassing and audits prove there is no evidence it happened. A statistics professor wrote to Lead Stories to say the statistical analysis is deeply flawed.

Dr.SHIVA Ayyadurai, MIT PhD, the Inventor of Email, Scientist, Engineer, shares the results of his team's mathematical analysis of four major counties votes in Michigan in the Trump-Biden election that reveals an unfortunate truth of U.S. voting systems. The analysis raises important questions for Election Integrity.

Lead Stories reached out to Ayyadurai via Twitter direct message and will update this report, if appropriate, when he responds.

In the video, Aaadurai says his conclusions of vote-stealing are based on the work of two analysts -- a FedEx software engineer and frequent voting software critic named Bennie Smith, who serves as a Democratic election commissioner in Shelby County, Tennessee; and Phil Evans, identified on his LinkedIn profile as an electrical and electronics engineer.

Lead Stories has reached out to Smith via Twitter direct message and to Evans via LinkedIn messaging to ask if they can supply photographic, documentary, witness affidavit or other evidence to buttress the vote-switching claim made on Ayyadurai's video.

Ayyadurai holds a Ph.D. in systems biology and is an inventor/entrepreneur and unsuccessful candidate in the 2017 Republican primary for the U.S. Senate seat currently held by Sen. Ed Markey, D-Massachusetts. Ayyadurai has challenged the outcome, saying he won, despite what the Secretary of the Commonwealth tallied.

Responding to claims like Ayyadurai's, Michigan Secretary of State Jocelyn Benson has declared that there is no evidence of digital skullduggery and any minor errors in early results reported were caught and in the routine auditing/canvassing process. The federal agency tasked with protecting the integrity of the 2020 election has also declared there was no hacking of election software or voting machines in the 2020 presidential election.

To help readers of this Lead Stories report, the hyperlinks to some of Ayyadurai's remarks will open his YouTube video near the point on the 1-hour-and-10-minute timeline at which he makes the point.

Here is a slide from Ayyadurai's YouTube video that sums up his statement that an algorithm stole votes from Trump and gave them to Biden: 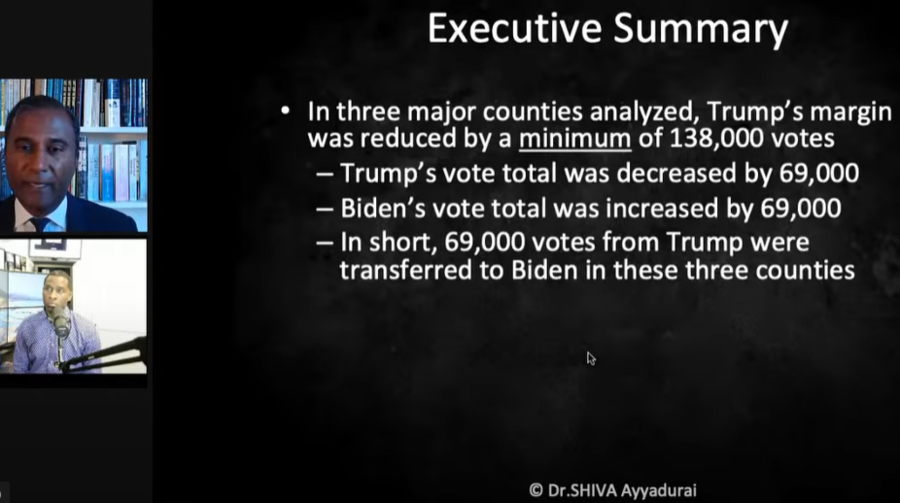 The video opens with Ayyadurai's assertion, about 2:10, that "We have ended up with voting systems where the input and the output are unverifiable." Later, after discussing his claim that he won the primary Massachusetts says he lost, at 7:20 he says "The outputs can be manipulated" and goes on to claim that a "weighted race feature" introduced in early electronic voting systems made by Diebold, gives some votes more weight than others and is a feature that allows election officials to manipulate outcomes.

The federal Cybersecurity & Infrastructure Security Agency (CISA) says the opposite is the case: that auditing and canvassing procedures ensure the veracity of vote counts and that there were no instances of software manipulation in the 2020 presidential election.

Dominion Voting Systems, the software company that is the target of claims of vote manipulation, says in its online statement that conspiracy theories like this ignore how voting systems actually work. Citing CISA's affirmation, Dominion says it is "not possible for a bad actor to change election results without detection." Voting tallies are 100% auditable, the company reports and the Michigan Secretary of State has declared there is no evidence of software manipulation of results.

Weighted votes are commonly used in corporate governance, where the number of shares a stockholder owns determines the weight of their votes and when one person or organization is given proxies so they can vote another stockholder's shares. Such voting is often conducted using election software.

Claim: Votes for Biden in strongly Republican precincts are proof something is wrong

At 17:08, Ayyadurai declares that, for the purposes of his analysis, precincts where 60% of the 50% who voted party line were Republicans, there is something wrong when Biden outperforms Trump.

Looking at the number of straight party-line voters in one precinct, Ayyadurai says, at 29:23 , "...the fact that 45% of people are Republican and Trump only got 25% votes is a little bit odd."

Ayyadurai puts forward a model that he says predicts what the vote for Trump should have been, precinct-by-precinct and that, he says, shows a too-perfect pattern of voters not choosing Trump.

But the assumptions built into Ayyadurai's mathematical model ignore, for instance, surprising vote patterns from the Michigan election immediately preceding the 2020 presidential race. In 2018, Democrat Gretchen Whitmer won the governorship by racking up big wins in urban counties, flipping nine counties Trump had won in 2016. Ayyadurai's analytical model relies on unproved assumptions -- not tested nor used by elections experts or statisticians -- that the portion of a precinct that selects a party-line ballot can be used to predict the votes that will be cast by non-party-line ballot users.

And, his data are displayed with all precincts represented by a same-size blue dot, although rural precincts are much smaller than urban vote centers. That display choice, will tend to mislead a viewer as to the weight that should be given to precincts that don't fit the model Ayyadurai uses.

Jeff Robinson, a professor of business and techology, with a PhD in Information Systems and a post-grad certificate in computer forensics, wrote Lead Stories on November 17, 2020, to take issue with Ayyadurai's model and conclusions:

He performed calculations between numbers that mean different things and created a metric that is totally meaningless. Even the simplest statements that he made, were wrong. For example he drew a graph and then placed a red line across it saying that zero values correspond to voting locations where Republicans voted straight party ticket.

(Just manually performing his calculation you can see that a precinct that had 60% straight party line votes for Trump and no one voted for him on any individual ballots would yield a value of 60... not zero. The question is 60 what? His metric has no meaning because it was based on two numbers from different populations that meant different things.)

In a phone conversation with Lead Stories on November 18, 2020, Robinson compared the Y-axis statistic to someone taking overall votes in a precinct minus the number of women voting and then concluding women stole Trump's votes.

Claim: Votes for Biden in strongly Republican precincts can only be the result of fraud

Using the graphics Ayyadurai includes in his presentation, Ayyadurai says the fall-off in Trump votes in precincts with a lot of party-line Republican voters lays out in a pattern too predictable for anything but the hidden hand of an algorithm swiping votes for Biden.

He dismisses the explanation that this is just how votes were cast or that the model is flawed. The two following slides outline what he says about the possibility his conspiracy theory about algorithmic theft is wrong. He dismisses that, saying that based on his expertise (in bio technology) and Bennie Smith's expertise as a software engineer interested in elections and Phil Evans' expertise as an electrical and electronics engineer, the model proves vote theft.

Ayyadurai repeats the claim of vote theft when discussing Oakland County, Michigan, at 31:08: "What Phil did, he did this for every precinct and he found out, when you really bring Trump's votes -- what we think the pattern should be around the straight party vote line -- you find out about 20,000 votes were taken from Trump and 20,000 were given to Biden in the Oakland early voting." He goes on to say, looking at their data chart:

This is too structured, too perfect...It drops in a nice linear fashion as though an algorithm was there...Remember, we've talked about it, the election systems going back to Diebold, they have the feature of being able to manipulate vote counts from one person to another, it's called the weighted race feature.

Michigan's secretary of state says its vote counting and tabulating system is secure and backed up by paper ballots, which means any massive vote theft would be easily detected by reviewing voters' ballot marks precinct-by-precinct:

Michigan uses all paper ballots, which are counted by tabulator machines. Vote tallies are printed and the paper record of the tallies as well as the paper ballots are stored in secure locations after counting is finished. The machines are not connected to the internet until all counting is finished and copies of the tally have been printed. Then some jurisdictions may connect a machine to send UNOFFICIAL results to the county clerk, while a copy of the paper tally is also driven to the county clerk.

Following are the two slides in which Ayyadurai says he considers these are normal patterns, but ultimately finds that is impossible. 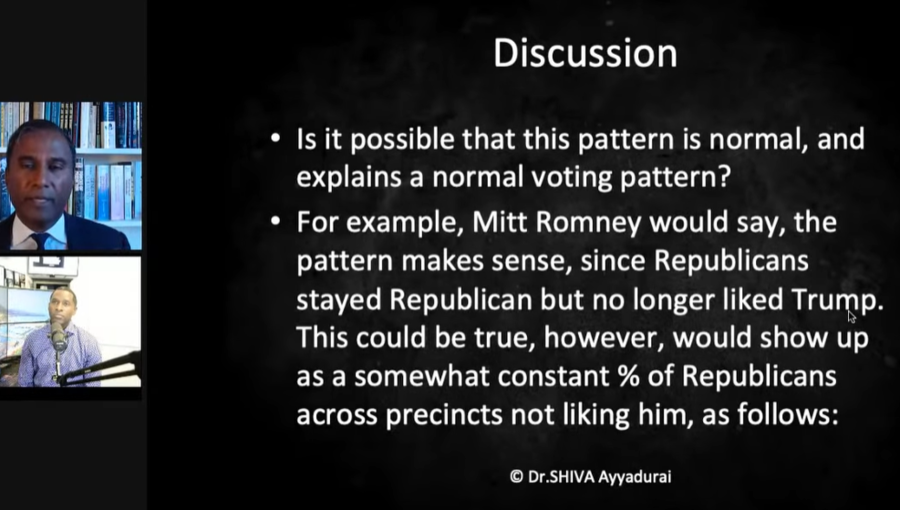 Ayyadurai does not add on-the-ground evidence to buttress his claim: No affidavits by witnesses to software tampering, no samples of malicious code, no discrepancies between precinct records and state totals and up-to-date records showing the existence of the "weighted race" feature, nor that it is used to rig elections.

Lead Stories has also reached out to Dominion Voting Systems to ask if the "weighted race" feature Ayyadurai refers to has carried forward from the technologies Dominion bought when buying or merging with predecessor companies in years past. This report will be updated, as appropriate, when Dominion responds.