Will sharing this picture on social media of a baby who was born blind help raise the $200,000 needed for treatment that could help the child see? No, that's not true: This post is a classic example of "share-baiting," and it has been circulating since 2017. WhatsApp, because of its encrypted design, cannot even trace the number of times a picture has been shared. This post does not follow Facebook's monetization promotion guidelines. This post presents a false scenario that encourages a social media user to share. There could be several hidden motivations for that, but none of them have to do with medical care for a blind baby.

The false claim reappeared on Facebook as a post (archived here) published on November 16, 2019. The caption in the meme says:

The baby is born blind and $200,000 is needed for her treatment so she can see again. You don't have to donate a penny but wasapp is raising the fund each time the picture is shared. Please share.

Although this post is almost a year old, it resurfaced in November of 2020 and has been getting renewed attention. This post appears to be part of a series of "blind baby" posts published on Facebook starting in early 2017. The earliest edition of this specific photo on Facebook that Lead Stories could locate was a November 27, 2017, post, but the caption text is identical to the other English-language posts of the "blind baby" series that appeared much earlier in the year.

Below are some examples of 2017 posts each using a different photo and the same share-baiting caption. Even the misspelling: "wasapp," appears in almost all of the duplicate posts. These pictures and the false claims have circulated all over the world, in several languages and on several social media platforms. There is no evidence that Facebook donates money according to how many times a picture is shared.

The baby with the yellow cap in the February 2, 2017, Facebook post was featured by Austrian Fact Checker Mimikama.at in a February 10, 2017, article titled, "WhatsApp-Nachricht mit: Dieses Baby ist blind." From the record of this article we can know that the posts were introduced to WhatsApp in that same time frame, and at least one edition was circulating with a caption in German falsely claiming that WhatsApp would pay for the baby's medical care according to the number of shares:

This photo had already appeared in a January 30, 2017 post in the Bosnian language with a slightly different phrasing in the deceptive caption:

Only people without heart and love will ignore this !!!
If you would help this girl, like and share the post !!!
This little girl can't open her eyes, this is how she was born.
LET'S SEE HOW MANY OF US WOULD HAVE HER TO SEE ??? !!!
God help her AMEN! 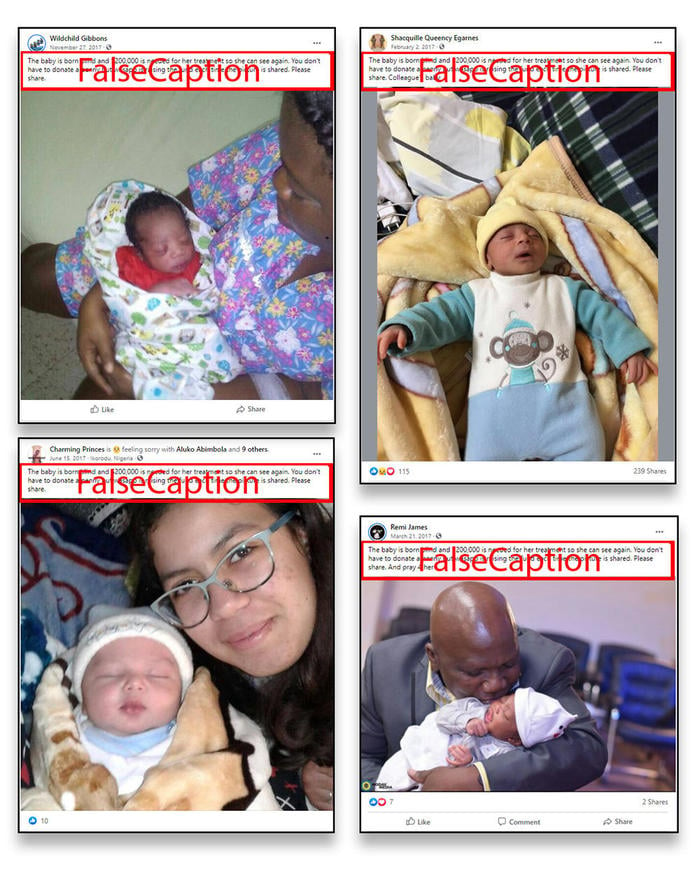 One post from June 15, 2017, showing a woman with eyeglasses, was shared by a person posting from Ikorodu, Nigeria. That post also was shared with a Thai language caption. This particular post has also been the subject of some debunking. On November 27, 2018, Hoax-Slayer.net published an article, "WhatsApp Blind Baby Donation Hoax Still Circulating." On July 24, 2019, Mahfud MD, of the Ministry for Political, Legal and Security Affairs of the Republic of Indonesia posted this tweet:

A February 7, 2017, post was shared by a person in Singapore. Of all the blind baby meme photos, this one is the only one for which Lead Stories could locate the original story. It is a tragic story from India that has nothing to do with a baby being born blind. This baby's mother, Shruthi Suvarna, died in childbirth on June 7, 2016. Daijiworld.com wrote on June 18, 2016, "Udupi: 24-year-old woman dies during delivery, medical negligence alleged." A June 12, 2016, Facebook post shows a collection of photos of Shruthi Suvarna, including the photo taken to make the false blind baby meme. 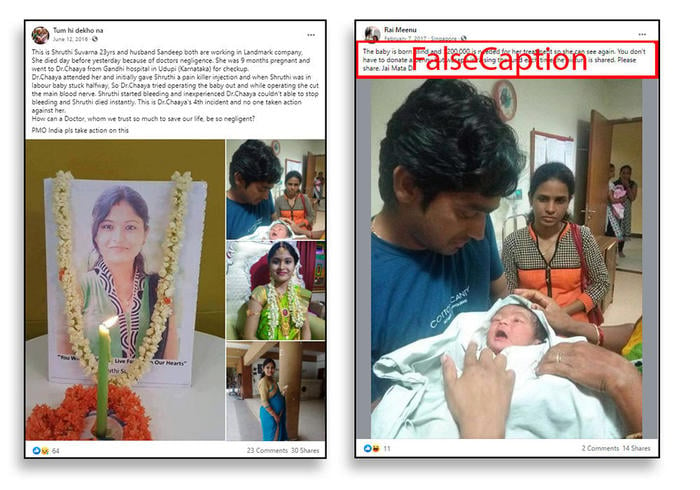 Share-baiting is a well-established engagement tactic on Facebook that goes hand-in-hand with like-baiting and comment-baiting. In this case of the "blind baby" memes, no clear motivation is evident, especially when factoring WhatsApp in how this meme spread. WhatsApp does not have a means of liking posts or counting them so this mysterious deception seems rather pointless. These posts about the babies were never true, but is it possible that such a promotion could happen?

Lead Stories reached out to Facebook's Communications office to inquire about this type of post. We were directed to the monetization promotion guidelines. In the portion covering administration of promotions, section two states:

Tricking an audience to interact with a post on Facebook will cause the post to become more visible algorithmically. Sharing the post to a group or to one's friend circle will give that post an even larger audience. The motivation behind some share-baiting is easy to trace. For example, a fake giveaway directs a person to share the post and like the page to be entered to win. The giveaway is a ruse (there is no prize) to get people to like the new page, increasing its value. After tens of thousands of real people have liked the page, the page might be sold or change its name. Another share-bait tactic is to increase exposure for an influencer or page plays into a marketing strategy.