Were the large red spikes recorded on a spectrogram on December 1, 2020 a dangerous "Schumann Resonance Explosion"? No, that's not true: The spikes on the spectrogram readout were caused by snow falling on the antenna of a monitoring station in northern Italy, a normal and unavoidable issue called the "microphone effect". It is typical to encounter the microphone effect from time to time when monitoring the electromagnetic Schumann resonance from Earth.

In this short video, the narrator James Kaufman speaks excitedly:

We've got spikes that look like they could go as high as 200 -- although they're so far off the charts it's hard to tell. Today you are witnessing something that is going to go down in infamy folks. We have Schumann resonance just going through the roof -- and I'm not talking about spikes either, this is constant. It's been happening for the last several hours. Everybody needs to take their blood pressure medicine and their anxiety pills and put their tinfoil hats on folks. Because we're being hit by direct energy and the vibrations have increased and they are not going away anytime soon. This is quite some event.

According to the monitoring station you can see significant spikes in the ELF noise 100 hertz, and also the ULF noise 10 hertz here. We will keep an eye on earthquake activity and keep you posted and we do expect more space weather later this afternoon as this must be part of it folks. God bless you and yours.
Please share our video and make sure you subscribe.

Lead Stories reached out to two people well versed in the Schumann resonance -- which the National Aeronautics and Space Administration (NASA) describes as an "atmospheric heartbeat"-- to better understand what might be going on with the readout shown in James Kaufman's video.

We spoke to Robert F. Pfaff Jr., Ph.D., at the NASA/Goddard Space Flight Center in Maryland by telephone. In 2011 Pfaff was one of a team of scientists, with Fernando Simões, who were first to detect the Schumann resonance from space, with equipment aboard the C/NOFS satellite.

He explained that the Schumann resonance is a real and natural part of the planet. Set off by flashes of lightning all around the world, electromagnetic energy moves in waves in Earth's ionosphere, the layer of the atmosphere that begins about 50 miles above the surface of Earth and extends about 600 miles out. Because Pfaff is not an expert in human physiology, he refrained from commenting on whether there is a possibility that the Schumann resonance could have an impact on the human body other than to say that he would be extremely skeptical about such claims.

Lead Stories also corresponded by email with Renato Romero in northern Italy. He operates the monitoring equipment and the website that shared the live spectrogram readout that showed the large red spikes. Romero is the author of the book "Radio Nature" and works in the field of electronic measuring instruments. Although he is not an academic himself, he has collaborative agreements with several research institutions as a private researcher. For the past 20 years his focus has been the reception of radio signals of natural origin.

The red spikes that caused such a disturbance on the YouTube video were not generated by a disturbance in the ionosphere, Romero explained:

The red signal is caused by the snow falling on the wire antenna, 11 meters high and 45 meters long. This phenomenon is called 'microphone effect' and cannot be avoided in low frequency electric field receptions: with rain and snow the electric field becomes crazy.

Romero provided some diagrams outlining specific points on the December 1, 2020, spectrogram that appears in the video. He explained:

In the spectrogram we can identify: 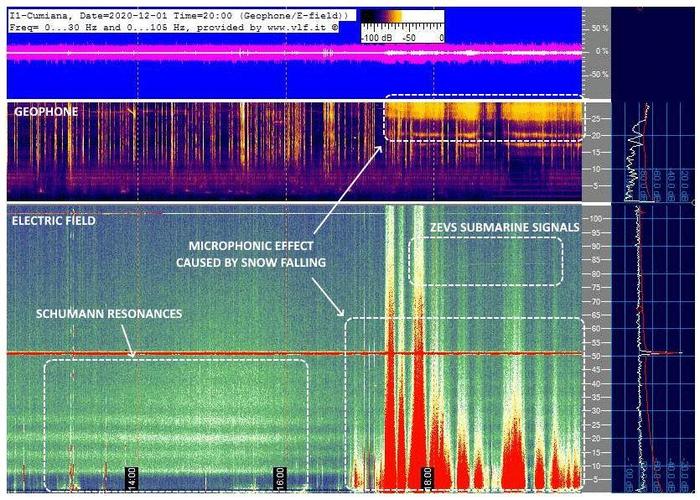 There is no change in the frequencies of the Schumann resonances. Any changes would be detectable at my monitoring station, and also detectable at other reception stations such as the one at the Arctic Circle. See for example the spectrograms of Kevo or Sodankylain Sweden. 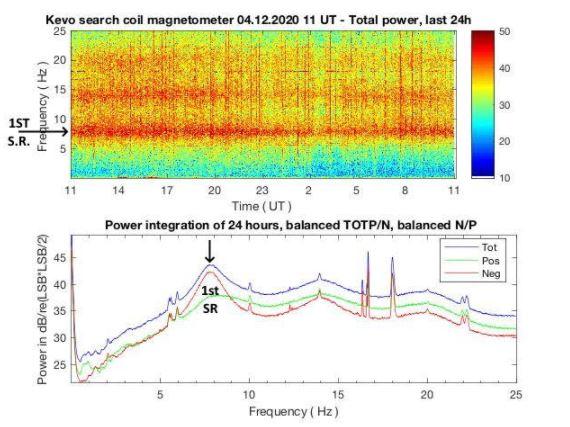 As you can see Schumann's first resonance is there, at 7.8 Hz, and never moved from there. The person speaking in the YouTube movie is probably in good faith, but he is also mistaken: he misinterpreted the data in the graph by attributing them a meaning that does not correspond to reality.

Even the plots showing the values that suddenly rise describe the same phenomenon: snow falling on the antenna and causing an electrical noise.