Did "tens of thousands of moms ... watch their child regress or die within 24-72 hours" of being vaccinated? No, that's not true: There is no confirmation that tens of thousands of moms watched their children regress or die within 24 to 72 after receiving a vaccination. The Centers for Disease Control and Prevention told Lead Stories there was "no association between vaccination and deaths except in rare cases." In the case of regression, the CDC said, "regression involves loss of previously gained functions, and typically takes much longer than 72 hours; no evidence associates vaccination with regression within 72 hours after vaccination."

The claim appeared as a post (archived here) where it was published on Instagram on November 30, 2020, under the title "Please comment with your story of [email protected]€€!NE injury below." It opened:

Let me get this straight: you blindly accept what the media, the pharmaceutical industry, & the medical community say regarding toxin-containing, liability free products that are known to cause harm, even though you've never read any of their studies, inserts, or testament of yourself, & you think the tens of thousands of moms who watch their children regress or die within 24 to 72 hours are liars? 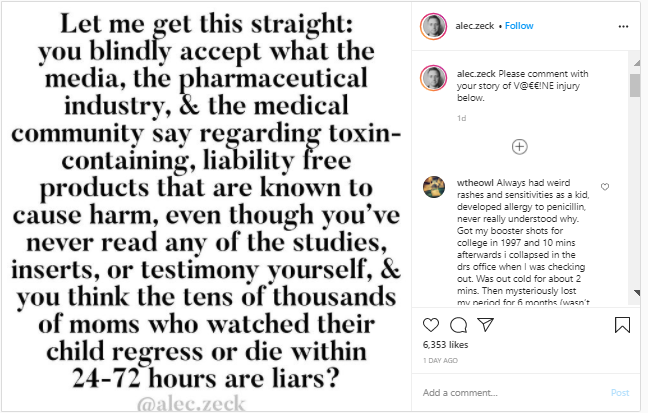 The controversy is over vaccinations in young children, with some asserting that their children had immediate and dire consequences, including death, after receiving their recommended shots.

Instagram has blocked anti-vaccine posts and hashtags, as CNN reported in 2019, which may account for use of symbols to spell out the word "vaccine" in the post.

The CDC denied that there was an association between vaccination and deaths in an email to Lead Stories on December 7, 2020 with the following information:

A large body of evidence supports the safety of vaccines, and multiple studies and scientific reviews have found no association between vaccination and deaths except in rare cases. Regression involves loss of previously gained functions, and typically takes much longer than 72 hours; no evidence associates vaccination with regression within 72 hours after vaccination. For a detailed discussion on deaths after vaccination please see the attached article (Miller et al. Deaths following vaccination: What does the evidence show? Vaccine. 2015;33(29):3288-92) which provides an overview and some specific examples.

The CDC shared multiple publications about vaccines that can be found here, here, here and here.

The CDC also shared a publication titled, "Deaths following vaccination: What does the evidence show?" From that publication:

Vaccines are rigorously tested and monitored and are among the safest medical products we use. Millions of vaccinations are given to children and adults in the United States each year. Serious adverse reactions are rare. However, because of the high volume of use, coincidental adverse events including deaths, that are temporally associated with vaccination, do occur. When death occurs shortly following vaccination, loved ones and others might naturally question whether it was related to vaccination. A large body of evidence supports the safety of vaccines, and multiple studies and scientific reviews have found no association between vaccination and deaths except in rare cases. During the US multi-state measles outbreak of 2014-2015, unsubstantiated claims of deaths caused by measles, mumps, and rubella (MMR) vaccine began circulating on the Internet, prompting responses by public health officials to address common misinterpretations and misuses of vaccine safety surveillance data, particularly around spontaneous reports submitted to the US Vaccine Adverse Event Reporting System (VAERS). We summarize epidemiologic data on deaths following vaccination, including examples where reasonable scientific evidence exists to support that vaccination caused or contributed to deaths. Rare cases where a known or plausible theoretical risk of death following vaccination exists include anaphylaxis, vaccine-strain systemic infection after administration of live vaccines to severely immunocompromised persons, intussusception after rotavirus vaccine, Guillain-Barré syndrome after inactivated influenza vaccine, fall-related injuries associated with syncope after vaccination, yellow fever vaccine-associated viscerotropic disease or associated neurologic disease, serious complications from smallpox vaccine including eczema vaccinatum, progressive vaccinia, postvaccinal encephalitis, myocarditis, and dilated cardiomyopathy, and vaccine-associated paralytic poliomyelitis from oral poliovirus vaccine. However, making general assumptions and drawing conclusions about vaccinations causing deaths based on spontaneous reports to VAERS - some of which might be anecdotal or second-hand - or from case reports in the media, is not a scientifically valid practice."

The CDC explained that the agency, along with the Food and Drug Administration (FDA) "monitor reports of adverse events and deaths that occur after vaccination using several different systems to perform ongoing safety monitoring of US-licensed vaccines. Please see this link for detailed information on how those systems work."