Does this video show the meeting of the Atlantic and Pacific Oceans at Cape Horn? Or two oceans meeting in the Gulf of Alaska? No, that's not true: This video was filmed in Canada, near Vancouver Island, and shows the dramatic difference in color of the plume of the Fraser River joining the salty ocean water of the Strait of Georgia. There are many mislabeled photos of the Fraser River plume circulating online, labeled as if it is an ocean in some place other than British Columbia.

The video was originally taken by a ferry passenger who posted the video on YouTube on March 6, 2016 with a detailed description, but her video has been taken without permission and now, miscaptioned. This copy of the video was posted to Facebook (archived here) on January 18, 2021 under the title "WOW, Where the Atlantic Ocean and the Pacific Ocean meet at Cape Horn". It opened:

To better understand ... but still surprising ...
The extraordinary point where the Atlantic Ocean and the Pacific Ocean meet, without mixing!
The two oceans do not mix. Watch the video that proves it to you.
This phenomenon can be also be seen in the Gulf of Alaska. And why do these waters not mix?
Because there is a huge difference in salinity between the clear water that comes from melting glaciers, which is cool and low in salt, while the water from the second ocean has a high salt concentration. Therefore, the two oceans have different densities, which makes them almost impossible to mix ...

The original video filmed by Maryan Pearson with piano soundtrack by Donny Pearson is captioned:

The river water (Fraser River) flows into the ocean water (Strait of Georgia): a short video clip shot while onboard the BC Ferries boat from Nanaimo, Vancouver Island (Duke Point) to Vancouver (Tsawwassen). Please share only and do not upload and use without consent from me or due credit, and do not give fake information about the video. I have registered the original video in my computer for copyright Thank you!

Thirty-five seconds into the video, the camera turns to view the deck of the ferry and large wave logo. This view matches an Almay stock photo of 'The Canadian ferry Coastal Renaissance sailing between Vancouver City and Nanaimo on Vancouver Island'.

Another image of the Fraser River plume in the Strait of Georgia, reproduced many times in social media posts, mis-labeled as 'oceans not mixing' is pictured below on the left. The proper original creative commons labeling on the photo points to a Flickr photo album maintained by Ocean Networks Canada. The caption explains that this brown river plume is only about one meter deep:

A sharp boundary appears as sediment-laden freshwater is discharged from British Columbia's Fraser River into the Salish Sea. Fresh water, which is less dense than salt water, spreads in a shallow (approximately 1 m deep) plume at the sea surface. Sediment carried in this plume then precipitates from the surface, accumulating on the Fraser River Delta below. In Spring, as snow melts in the mountains, the fresh water flow increases significantly and great quantities of sediment are deposited. 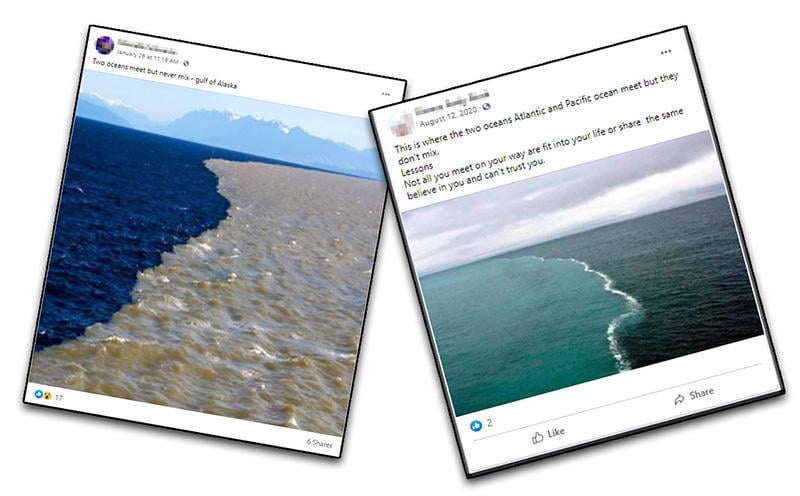 Ocean Network Canada has an article on their website titled, "Fraser River Plume" and another, "Understanding the Oceans" with essays explaining their work studying the surface currents.

This is a puddle of light water (formed by mixing fresh Fraser water with salt water) that floats on top of the more saline (and more dense) Strait of Georgia water. It is only a few meters thick (whereas the Strait is 100 metres deep or more), but it is the part of the ocean that is important to us because we boat around in the upper few meters of the ocean. We know, in a general way, that this "puddle" moves around because of the tide and winds, but also can break up into swirls and smaller eddies on its own. Exactly how fast it moves under a wind of a particular speed, and how and what causes it to break up are interesting scientific questions.

The photo appearing in the Facebook post above, on the right, mislabeled as the meeting of the Atlantic and Pacific Oceans, shows a photo of another river plume taken during a research cruise in the Gulf of Alaska. This photo was taken by Kent Smith on July 4, 2010 and was also shared originally on Flickr. Smith's photo was featured in an article by Alaska Dispatch News, "Mythbusting 'the place where two oceans meet' in the Gulf of Alaska" (archived here)

Some of the posts purportedly showing 'two oceans not mixing' are simply photos of shorelines. The center photo is by Johann S. Karlsson, and shows a black sand beach in Iceland. The unidentified photo on the right shows breaking waves at a shore. The post on the left, featuring a collection of four photos- shows the same Kent Smith photo, twice, with slight color adjustments, and the black beach in Iceland. The picture on the far left remains unidentified. 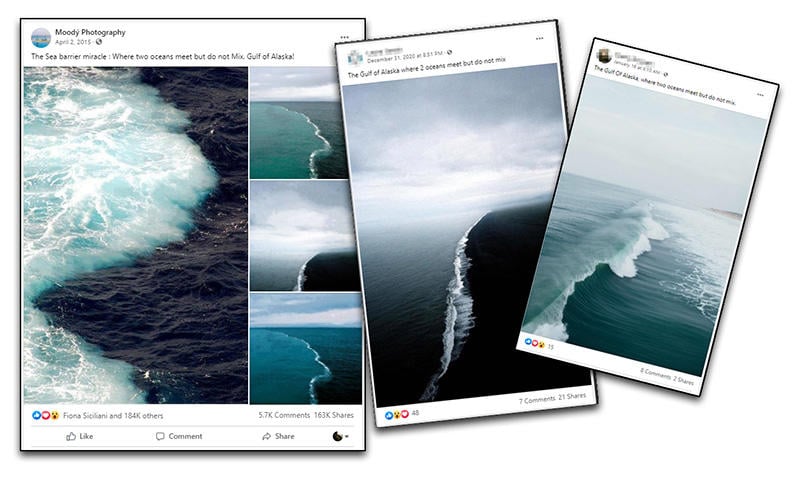 One final image that has appeared in many posts is a scene shot with a drone over charter fishing boats in the Gulf of Mexico. The striking contrast in the waters this time was caused by the plume of the Mississippi River, and if that wasn't enough, some versions have had the color saturation of the photos even further enhanced. The original drone footage was posted on YouTube by Marlin Magazine in 2015 with the caption, "A true showing of colors when the Gulf of Mexico meets the Mississippi River."