Does a video show "ANTIFA being bused into D.C. in advance of a MAGA rally on January 6, 2020"? No, that's not true: A video that claims to show buses of protesters heading into Washington, D.C., for the pro-Trump rally on January 6, 2021, is old footage -- it is actually from a December 5, 2020, protest at the governor's mansion in St. Paul, Minnesota, and was covered by local media.

The claim appeared as a post published on YouTube on January 4, 2021, titled "ANTIFA Being Bussed Into D.C. In Advance Of MAGA Rally On January 6, 2020" (archived here) which opened:

This guy witnessed Antifa and BLM being bused in for the Trump Rally with a police escort. He has video to prove it.

The headline on the YouTube post erroneously states that the rally is "January 6 2020," however, the rally was scheduled for January 6, 2021, in the nation's capital.

The video was not shot in Washington, D.C.. It was taken at a protest outside Gov. Tim Waltz's home on December 5, 2020.

The video opens with a man saying "Sitting up on Summit."

Video posted on YouTube on December 5, 2020, with the headline, "St. Paul, MN | Protests at the Governor's Mansion Part 2 | 12.05.2020," shows the same crowd outside the governor's mansion at the cross streets Summit and Chatsworth.

ABC 5 Eyewitness News KSTP reported on the protests on December 5, 2020. The article noted:

An estimated 250 people were in attendance as Minnesota State Patrol troopers in riot gear, alongside several local law enforcement agencies, lined up between the two sides."

In the video claiming to show protesters heading to Washington, D.C. at :53 seconds into the video an officer wearing a jacket that says "STATE PATROL," can be visibly seen. 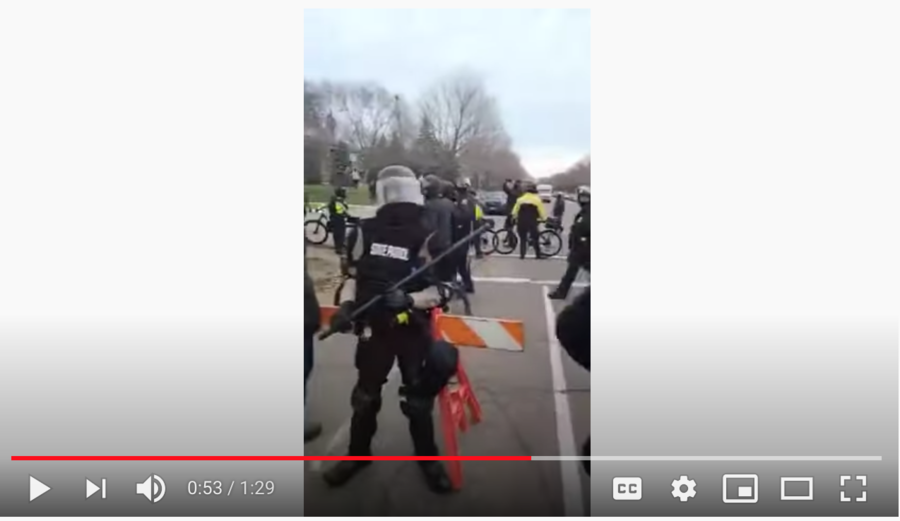 The same officers are seen in the videos posted by ABC 5 Eyewitness news in the opening seconds of its video.

Washington, D.C., does not have "State Patrol" officers, the city is patroled by the Metropolitan Police Department.