Did a regulatory freeze on "any new and pending rules" put in place by the Biden Administration on January 20, 2021 cause the price of insulin to increase? No, that's not true: Among Trump's executive orders President Biden froze for 90 days was one aimed at saving insulin users money. The Trump order was to have required federally approved health centers pass along to patients any savings on the discounted prices the clinics receive on the purchase of insulin and epinephrine. But Biden's first-day-in-office order did not affect the current price of insulin to consumers for two reasons:

The claim appeared in a video post (archived here) published on Facebook on February 11, 2021. Among the quotes by a FaceBook user who identifed herself as Rachel Valentine in the 11-minute video:

"Last year under Trump our insulin payment went to $60 a month for this box. ... This is the first time I've gotten insulin prescription filled since Biden was inaugurated into office, and if you voted him in, I'm a little mad today. ... I paid $328 for this one box of insulin. ... I would have paid $500 without the coupon. ... If you think this is just the story of my family and what Biden has in store, you are SO blind!"

The video was originally posted February 9, 2021. It has been shared since then multiple times on the FaceBook pages of other users.

The woman in the video does not offer any documentation to show the prices she says she paid for the insulin, which she identifies as Novolog, either under the Trump or Biden administrations. She does not show any receipts.

It is also not clear whether the price of her prescription may have gone up significantly in January because she had not met any new applicable insurance deductible for 2021.

The issue of skyrocketing insulin prices precedes the Trump administration, a fact that has been widely documented.

Similarly, the National Association of Community Health Centers, pointed out in a January 25, 2021 news release that:

From 2009-19, drug makers tripled the prices of common types of insulin in the U.S, for no evident reason.

This graphic from the Business Insider online issue of September 18, 2019 demonstrates the steep rise over a 10-year period. 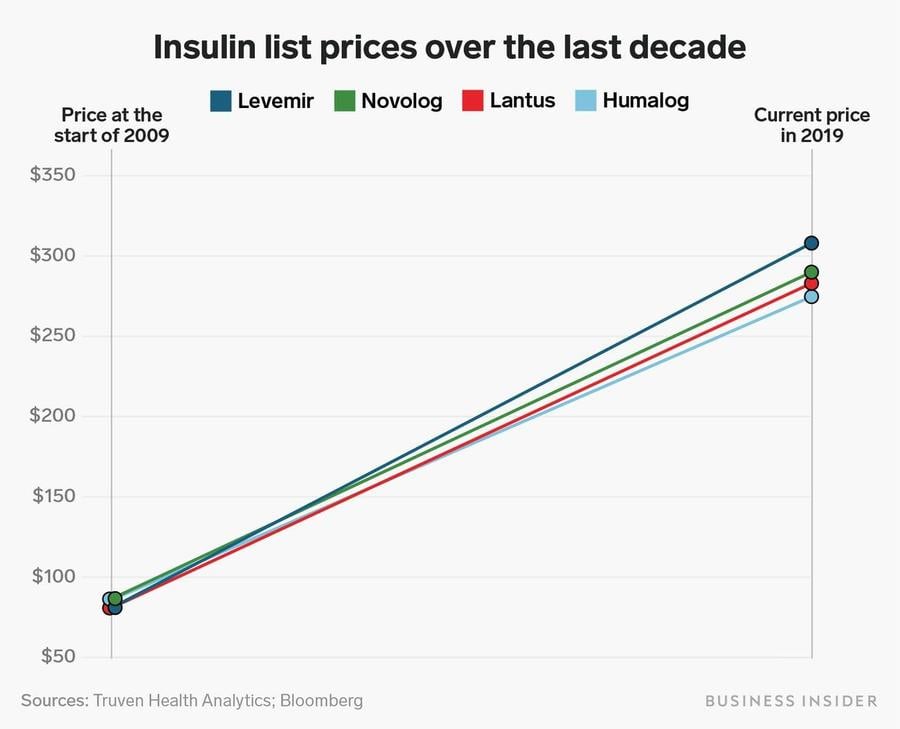 A January 5, 2021 article by Forbes detailed how bad the situation has become for patients:

Of the approximately 35 million Americans who have diabetes (Types 1 and 2), about a third require insulin to manage their disease. For diabetic patients, out-of-pocket costs for insulin can be a major expense, whether they are insured in the commercial market, enrolled in Medicare, or un- and underinsured.

For decades, list prices of insulin products have been soaring. ...

Ninety percent of commercially insured patients with Type 2 diabetes are prescribed the newer versions of insulin. These more effective and easier to administer formulations of insulin are costlier. Since 2012, list prices of many of these newer forms of insulin have risen particularly rapidly, with average annual increases of more than 15%.

Newer versions of insulin retail for between $175 and $300 a vial. Most patients with diabetes need two to three vials per month, and some can require more. So, without direct assistance from drug manufacturers, this amounts to a substantial monthly cost burden. There have been multiple reports of patients who cannot afford insulin products. Roughly a quarter of diabetic patients dependent on insulin skimp or even skip doses altogether.

Sixty-eight percent of uninsured patients pay the full list price for insulin, while 9% of privately insured and 3% of Medicaid beneficiaries do. Consequently, the uninsured are much more likely to report being unable to afford prescription medicines, by a 38% to 10% margin.

It was under those circumstances that then-President Trump signed executive orders in July 2020 that aimed to curb prescription prices. With regard to insulin prices, the Department of Health and Human Services trumpeted in a July 24, 2020 news release:

According to the release, the executive orders instructed HHS to:

Require federally qualified health centers who purchase insulins and epinephrine in the 340B program to pass the savings from discounted drug prices directly on to medically underserved patients. This will increase access to life-saving insulin and epinephrine for the patients who face especially high costs among the 28 million patients who visit FQHCs every year, over six million of whom are uninsured.

But that measure did not address the needs of the majority of insulin users, as CNN pointed out in a February 1, 2021 article:

The rule only affects medications these centers purchased through the 340B drug discount program, not the prices of these drugs for the general public.

The Trump administration was aware of the order's limited reach, according to a January 27, 2021 report by Charlotte, N.C., NBC affiliate WCNC:

HHS finalized the rule in late December. But in publishing that final rule, HHS acknowledged "the economic impact is expected to be minimal" since the vast majority of patients who get insulin from community health centers already get discounted medication. In some cases, those patients receive a one-month supply of insulin for just $7, according to the report published in the Federal Register.

The Trump executive order was scheduled to take effect January 22, 2021, two days after Biden was sworn into office. But Biden chief of staff Ronald Klain issued a memorandum on January 20, 2021 titled "Regulatory Freeze Pending Review." That 90-day freeze affected several of Trump's executive orders, including the one on insulin, which now would go into effect March 22, 2021, if at all.

Such freezes, which affect new regulations that have not gone into effect, are common with incoming administrations as the new president and staff review leftover policy and consider new regulations. AFP notes that Trump chief of staff Reince Priebus issued a similar memo on January 24, 2017, four days after Trump took office.

The executive order was not popular with the groups that were supposed to implement it. CNN said:

Community health centers opposed the rule, saying it would backfire and make it harder for them to provide these medications, particularly during the pandemic. They already offer sliding fee discounts to low-income patients, according to the National Association of Community Health Centers, an industry group.

The community health centers association said in its January 25, 2021 news release "the regulation would have burdened them with excessive red tape without doing anything to lower how much drug companies charge for drugs." Said the group:

The stated aim was to cut drug prices. However, it triggered alarm among safety-net health care providers and bipartisan lawmakers because it would accomplish the opposite of what the Trump Administration intended -- ultimately making it harder for health centers to provide affordable life-saving services and prescription drugs -- especially during the pandemic. To be clear, the insulin and Epipen regulation that was frozen by the Biden Administration only affects medications purchased through the 340B drug discount program at health centers. The overall prices of insulin and Epipens across the country are not affected by the Trump Administration regulation or the recent action by the Biden Administration.

Asked for comment, HHS referred Lead Stories to the White House, which did not reply.