Did all of Germany's close to 30,000 wind turbines and millions of photovoltaic panels suddenly stop working due to harsh weather conditions? And do wind turbines in Germany have to be heated in cold temperatures, taxing the country's energy grid? No, that's not true: Data on Germany's power production during January and February of 2021 shows that renewable energy sources still were contributing to the country's energy supply, albeit not at full capacity. Some of that capacity loss is due to annual planetary motion, not weather.

The claims originated from a Facebook post (archived here) published on February 10, 2021. The post features an image of a worried-looking Chancellor Angela Merkel next to a stock photo of a snow-covered solar panel. The image caption reads:

......Germany's millions of solar panels are blanketed in snow and ice....(not working)...
Its 30,000 Wind Turbines are not turning in the Freezing, Windless Weather....Actually......they need a constant INPUT of electricity from the grid so they dont freeze up & chew up their internal workings.....
COAL plants to the RESCUE...!

Freezing generally is not an issue wind turbines in Germany face and even if they have to be taken off the grid temporarily for other reasons, they do not incur damage in cold temperatures. In climates colder than Germany, wind turbines often are equipped with heating systems, but the energy needed to heat the blades is offset by the electrical power the turbines produce.

The drop in solar energy production is likely not due to heavy snowfall blocking photovoltaic panels, but caused by winter's shorter days and overcast skies. This happens every year, however, and does not mean the country was facing blackouts. While ongoing heavy snowfall can damage solar panels, most of them are designed to work in harsher climates.

A data visualization of Germany's electricity production from renewable as well as conventional sources, provided by the Berlin-based think tank Agora Energiewende, shows that wind turbines and solar panels have been generating at least some electricity from mid-January 2021 through mid-February 2021. It is true, however, that the power produced by renewable sources was significantly below the national demand during that time. There are several shorter periods in January and February when most of the country's energy was produced by conventional sources. 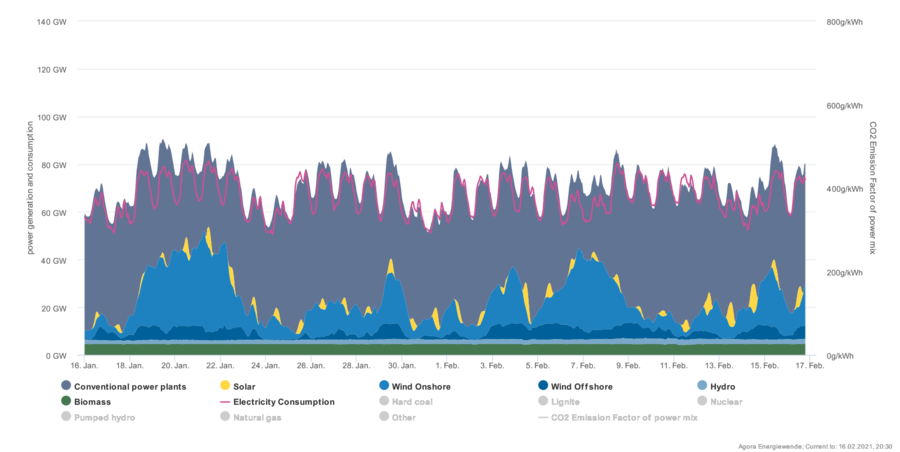 A visualization of the data for the past year, however, shows a that this is a recurring phenomenon. During the winter months, there is a lot of fluctuation in wind-generated power and not a lot of solar power to fill the gap. 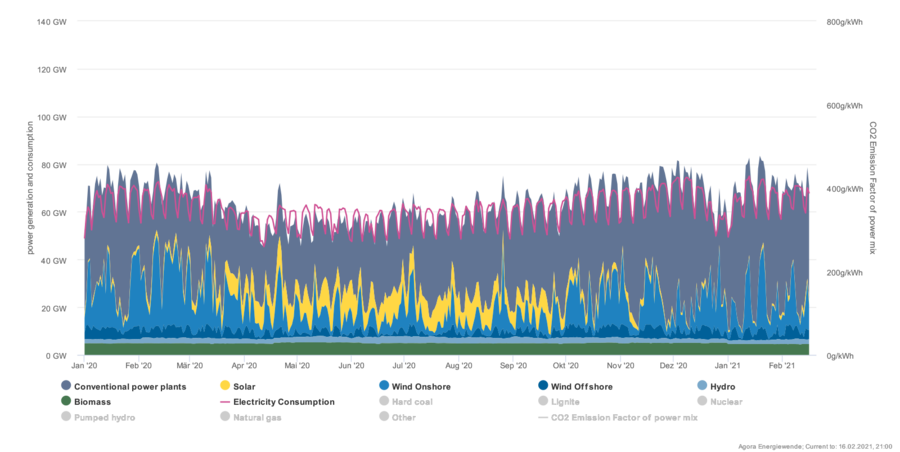 These periods of short, overcast and windless days make the usually efficient renewable energy sources less reliable and are known as the Dunkelflaute, or "dark doldrums," among German energy experts and policy makers. It would be misleading to claim that this is a problem that caught the country and its political leader by surprise. The issue is taken into account and a number of possible solutions are being debated and tested to secure a steady energy supply as Germany gradually phases out coal and nuclear power plants.

The reasons for the decreased energy output of renewable energy sources are based in astronomic phenomena rather than weather or technological failures, according to experts.

Dennis Kruse of Deutsche WindGuard, a German consulting firm providing technical services to wind farm developers worldwide, explained in an email to Lead Stories on February 16, 2021, that the weather conditions in Germany generally do not present a major problem when it comes to wind turbines' efficiency. While manufacturers offer optional heating elements, most of the turbines in Germany do not have them as such add-ons do not withstand a cost-benefit-analysis. In colder climates, however, they can significantly increase efficiency by preventing ice from forming on the turbine's blades. As Kruse points out, however, the electrical energy required to operate the heating is negligible compared to the turbine's output and that turbines are not damaged by the cold and thus do not have to be heated while they are not in operation.

Kruse also explains the reasons why wind turbines might not be in operation temporarily. Here is his statement, translated from German:

There are several reasons why wind turbines in Germany might be standing still for a bit. Most commonly, this is simply due to what is called feed-in management by the responsible grid operators, because power cannot be fed into the grid momentarily due to an oversupply of electricity or network bottlenecks. In the winter months, during very particular weather conditions (especially when humidity is very high and temperatures are slightly below freezing), it can actually happen that ice forms on the rotor blades. If that happens, the turbines turn off and someone has to go and check whether the ice actually presents a safety issue. In many cases, the turbines can be turned back on right after.

Dirk Ketelsen, who manages the Buergerwindpark Reussenkoege, a pioneering, communally-owned wind farm in Germany's northwestern coastal region, told Lead Stories in an email from February 16, 2021, that their wind farm does not use turbines with heating elements and that their turbines also operate efficiently when temperatures drop during the winter months. Here is what he wrote, translated from German:

We almost always get wind here and do not have to use additional heating, since the turbines create enough heat through the heater and the generator. We do not have blade heaters since turbines freezing over is very rare here. At higher altitudes, they can make sense. If there is no wind and temperatures are below freezing, it takes a couple of hours for the control systems to warm up sufficiently but for us, this happens maybe once every ten years.

Regarding the generation of solar power during the winter, it is true that heavy snowfall can affect photovoltaic panels' efficiency but it is difficult to quantify how much of an effect this really has. When looking at the isolated data for solar power produced in Germany in February, the graph shows that a snow storm that hit Germany around February 7, 2021, did seem to affect the output of photovoltaic systems. It is, however, more likely that this was due to overcast skies since temperatures remained low on the following weekend, but the sunny weather already increased the power generated from solar panels. 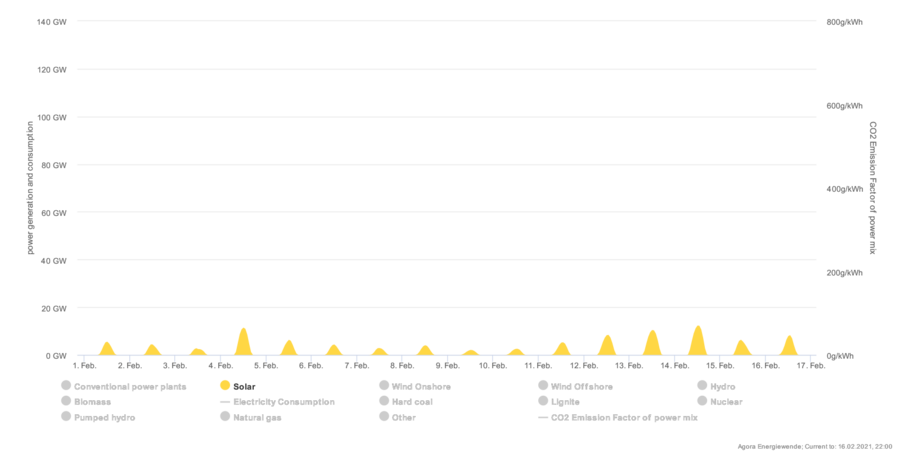 According to the U.S. Office of Energy Efficiency and Renewable Energy, solar panels are still an efficient option for generating electricity in colder climates. Lighter coatings of snow usually do not present a problem and the light-scattering effect of snow can even make the panels work more efficiently. Heavy snowfall might prevent light from reaching their surfaces, but since most solar panels are installed at an angle, even large amounts of snow tend to slide off after a short amount of time. The solar panel shown in the Facebook post would likely still produce some energy, since its surface is not entirely covered in snow.

Looking at Germany's total solar power output over the whole year, it becomes clear that solar power significantly contributes to the country's energy supply. In 2020, Germany produced a total of 51 billion kilowatt hours of electricity from CO2-neutral solar power.

While it is true that Germany still relies on coal and nuclear power to secure a steady supply of energy, the Facebook post paints a misleading picture of the country's Energiewende, the gradual transition to renewable energy sources. According to recent data provided by the Federal Statistical Office in Wiesbaden, 35% of Germany's energy supply already comes from renewable sources. To date, coal plants still have to step in when supply from wind and solar power fluctuates. In 2020, 16.2% of the total 567.4 billion kilowatt hours of electrical power produced in Germany came from lignite, or brown coal, with an additional 7.5% from hard coal. Nuclear power added another 11.3%. In the coming years, however, these numbers are going to shift towards more carbon-neutral and renewable energy sources.

As of February 2021, Germany still relies on fossil energy sources, but this does not support a claim that the country's Energiewende has failed.