Does the song "Jingle Bells" make a hidden reference to slaves forced to wear bells so they could be easily tracked if they tried to escape under the cover of night? No, that's not true: The song "Jingle Bells," originally named "One Horse Open Sleigh," is a song about the fun of a winter sleigh ride. The song is not about slaying slaves or slaves wearing bells, although the song is not without a controversy over a racist history. At issue is not a hidden meaning about slave bells in the lyrics. Controversy arose because the song was written by James Lord Pierpont, who wrote at least 13 songs for minstrel shows. "One Horse Open Sleigh" was originally performed by a blackface performer, Johnny Pell, at a minstrel show at Ordway Hall in Boston on September 15, 1857.

A video with text attributed to Mike Glass was posted on TikTok (examples here and here) featuring a still image of a man wearing a padlocked iron collar with bells hanging from metal arms. Many new social media posts based on the Mike Glass caption appeared on TikTok and some migrated to Facebook. One example, a screenshot, was posted on November 28, 2022. A reel was posted November 30, 2022, by the Facebook Page Lola Mgv (Lolita La Divina). The post was captioned:

What is the true meaning behind jingle bells? Pay attention to the truth! 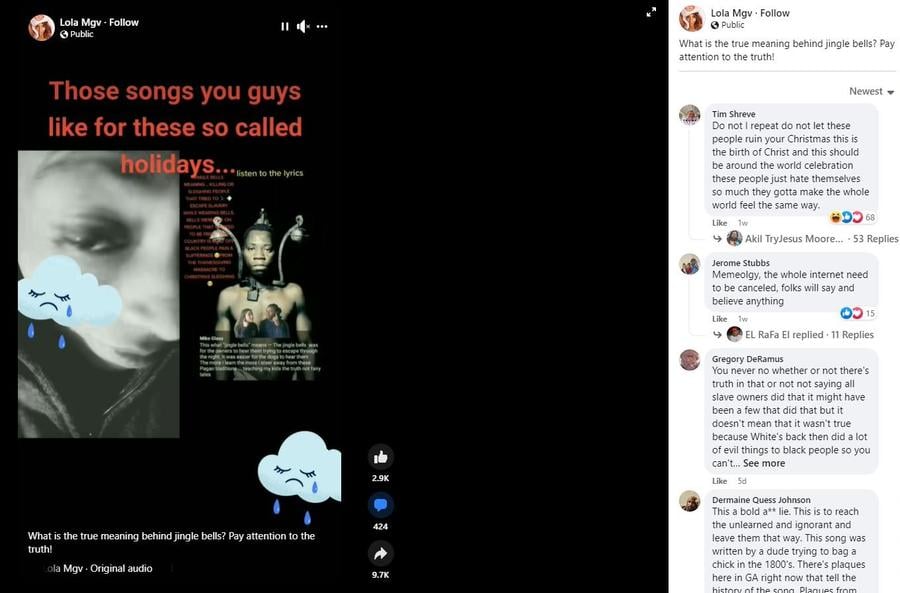 Red text on the video reads:

Those songs you guys like for these so called holidays...
JINGLE BELLS MEANING .. KILLING OR SLEIGHING PEOPLE THE TRIED TO ESCAPE SLAVERY WHILE WEARING BELLS. BELLS WERE PUT ON PEOPLE THE WANTED TO BE FREE. THIS COUNTRY IS BUILT OFF BLACK PEOPLE PAIN AND SUFFERING FROM THE THANKSGIVING MASSACRE TO CHRISTMAS SLEIGHING.

Mike Glass
This what "jingle bells" means -- The jingle bells was for the owners to hear them trying to escape through the night. It was easier for the dogs to hear them. The more I learn the more I steer away from these Pagan traditions ... teaching my kids the truth not fairy tales.

The image that appears in the video is an art photograph from a 2014 series by Fabrice Monteiro called "Maroons: The Fugitive Slaves" (Marrons, Les esclaves fugitifs). In a February 12, 2016 video on YouTube (at 1:30 minutes), Seattle gallery owner Mariane Ibrahim explains that the cruel punishment devices featured in the photo series are historical reconstructions made by modern Beninese blacksmiths. The devices were modeled after those pictured in a 1685 book of laws pertaining to slaves in French colonies called "Le Code Noir." So while this photo is a modern reconstruction, it is historically accurate. Similar iron collars for punishment both with and without bells can be found in museum collections (Pictured below and here, here, here, and here)

An academic article by Kyna Hamill titled, "'The story I must tell': 'Jingle Bells' in the Minstrel Repertoire" was published by the Cambridge University Press journal, "Theater Survey," on August 10, 2017. Hamill is a Master Lecturer affiliated with Boston University's School of Theatre and African American Studies. An earlier article by the same author was published by BU Today on December 8, 2016, titled, "'Jingle Bells' History Takes Surprising Turn -- Beloved Christmas favorite was first performed in Boston minstrel hall."

These two articles delve deep into the history of minstrel shows as well as the musical tradition of songs about sleigh rides, of which there were many, which were a popular feature in the minstrel shows. The lyrics of several similar sleigh bell songs are included in the Theater Survey article. There is an unresolved question of where Pierpont actually wrote the "One Horse Open Sleigh" song -- if it was in Medford, Massachusetts, or Savannah, Georgia. Both locations are marked with plaques. The article in BU Today has the image of the playbill for the first performance, and Hamill describes the context of such a performance:

"This was the playbill," she says, handing over a copy from the Harvard Theater Collection at Houghton Library that puts the song's first performance at impresario John Ordway's Ordway Hall, on Washington Street in Boston, on September 15, 1857. Then called "One Horse Open Sleigh," it was performed by Johnny Pell, working with a troupe called Ordway's Aeolians, who performed for half the show as "Dandy Darkies." Ordway Hall, opposite the Old South Meeting House in Boston, was a hotspot for the then-popular entertainment of white men performing in blackface, offering a racist caricature of people of color as middle-class entertainment.

On December 14, 2017, Fox News reported on the story calling it "the newest Christmas controversy" and suggesting Hamill is a social justice warrior.

A December 29, 2021, article in patch.com reported the Council Rock Primary School in Brighton, New York, removed "Jingle Bells" from the school's repertoire. A portion of the open letter from the school superintendent, Kevin McGowan was quoted in the article, "...if there is ever a question as to whether or not something might be experienced differently by someone else, shouldn't we be respectful of that?" Patch.com also quoted Hamill:

I, in no way, recommended that it stopped being sung by children. My article tried to tell the story of the first performance of the song, I do not connect this to the popular Christmas tradition of singing the song now. The very fact of (the song's) popularity has to do (with) the very catchy melody of the song, and not to be only understood in terms of its origins in the minstrel tradition. ... I would say it should very much be sung and enjoyed, and perhaps discussed.

Brighton Central Schools assistant superintendent, Allison Rioux, was quoted in an article in the Rochester Beacon introducing the theory that the song had something to do with slave bells. Rioux does not say where this unfounded theory came from.

Some suggest that the use of collars on slaves with bells to send an alert that they were running away is connected to the origin of the song Jingle Bells. While we are not taking a stance to whether that is true or not, we do feel strongly that this line of thinking is not in agreement with our district beliefs to value all cultures and experiences of our students.

A Facebook image search for "jingle bells slave" shows that the Monteiro photo appeared with a text overlay, "THE ORIGINAL JINGLE BELLS" as early as May 8, 2019. It was posted by the page True Biblical Black History with the caption:

Did you know that our peoples the HEBREW ISRAELITES ( tribe of Judah) were the original jingle bells?
The Slave Masters taught us how to CELEBRATE CHRISTMAS, making fools out of us, until this,........DAY!! N

..."Jingle Bells" originally performed in 1857 as "blackface" (white people painted their faces black) in a minstrel show as "One Horse Open Sleigh" in Boston. Slavery wasn't abolished in the US until 8yrs later. This song mocked enslaved Afrikanz who were still in slavery!"
Our Ancestorz were forced to wear iron shackles on the wrists, necks, and even faces. Bells were attached so that could be heard by every movement of the slave.
Something to thing about as you chime in on christmas caroling... it's a mockery and blatant diss to Afrikan people both in performance (blackface) and enslavement (bells attached)...

While it is true that there were devices with bells that were used to torment and subjugate slaves, not all bells are synonymous with slavery. There are several types of sleigh bells; chimes that are mounted on the harness or on the shafts of the sleigh, and crotal bells, sometimes of graduated sizes, attached on leather straps which bounce with the movement of the horse. The UK Detector Finds Database has an extensive article about the types of crotal bells that have been found in the UK and the foundries that made them. The earliest bells that have been found in the UK date to the beginning of the 13th century.

Bells are one of a very small number of artefacts that have been in virtually continuous production for over 4000 years. The earliest known examples were made in China before 2000 BC, and they were familiar everyday objects to the ancient Indians, Egyptians, Greeks and Romans. They have served a number of purposes, from ritual, magical and religious, to musical, signaling and warning. Apart from their functional role, bells have served as decorative devices throughout the ages, and continue to be popular as harness embellishments to the present day. Their longevity is reflected by the fact that the Guinness Book of Records lists the Whitechapel Bell Foundry as Britain's oldest manufacturing company, having been established in 1570, or possibly even earlier, and still producing bells today.

A blog post from the Carriage Association of America explains the practical reason why sleighing and bells go hand in hand:

I don't suppose it would be possible to say with any certainty when sleigh bells were first used, but we do know they were used in Europe as early as the 17th century. The prime reason for their use was safety. A fast moving sleigh moving over packed snow makes hardly a sound, not even from the horse's hooves. Often there would be only one track on country roads and this was used by traffic moving in both directions, so some kind of audible warning was necessary and what could be better than bells? The sound of bells travels long distances in cold still air. 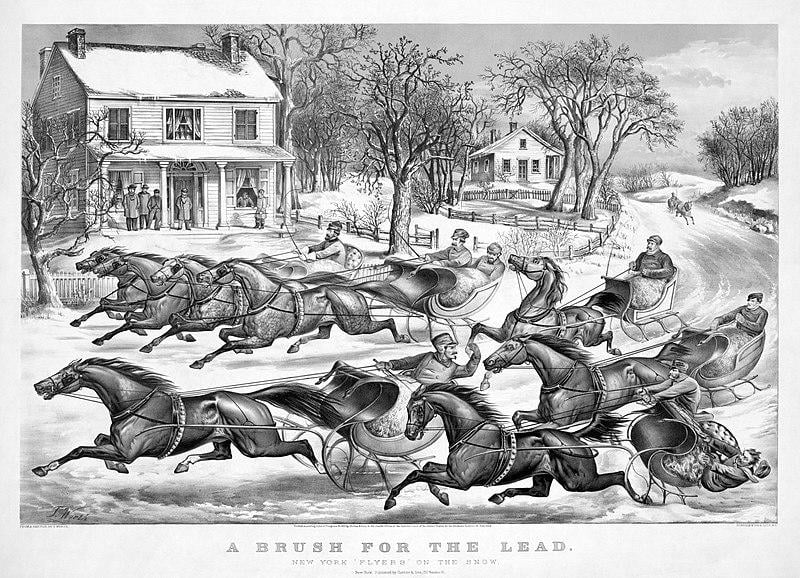