The claim seems to have originated from spammy science accounts on Twitter that duplicated Bray's image with false captioning, crediting Bray's image to the Parker Solar Probe. That mis-captioning has moved over to Facebook and appears in a post (archived here) where it was published on February 7, 2021. It was captioned:

The closest image of the Sun, captured by the Parker Solar Probe, from 6 million Kilometres away.

This is how the post appeared at the time of this writing: 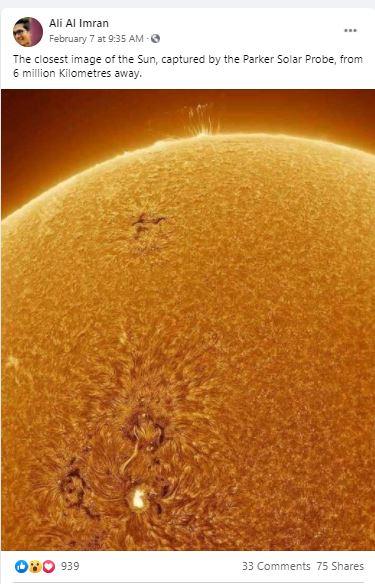 NASA's Parker Solar Probe was launched on August 12, 2018, and is traveling an elliptical path. It's distance from both the Earth and the sun will vary over the course of its six year, eleven month long mission. NASA summarizes the objective of the mission this way:

The spacecraft will come as close as 3.83 million miles (and 6.16 million kilometers) to the Sun, well within the orbit of Mercury and more than seven times closer than any spacecraft has come before.

To perform these unprecedented investigations, the spacecraft and instruments will be protected from the Sun's heat by a 4.5-inch-thick (11.43 cm) carbon-composite shield, which will need to withstand temperatures outside the spacecraft that reach nearly 2,500 degrees Fahrenheit (1,377 degrees Celsius).

The Parker Solar probe is carrying four different instruments to make scientific measurements of the energy of the sun and the solar winds, but only one of the four instruments is for imaging, the Wide-field Imager for Solar PRobe (WISPR). The WISPR telescope is not intended to take direct photos of the sun itself. In the embedded video below, Mark Boies, an instrument systems engineer, explains that the sun is a trillion times brighter than the very faint signals from the corona which the telescope is designed to capture. Because of this, the WISPR telescope remains in the deep shadow of the heat shield of the Parker Solar Probe. It is not designed to make images of the sun's surface.

On November 12, 2019, NASA released data from the Parker Solar Probe to the public for the first time. This is what an image from the WISPR instrument looks like: 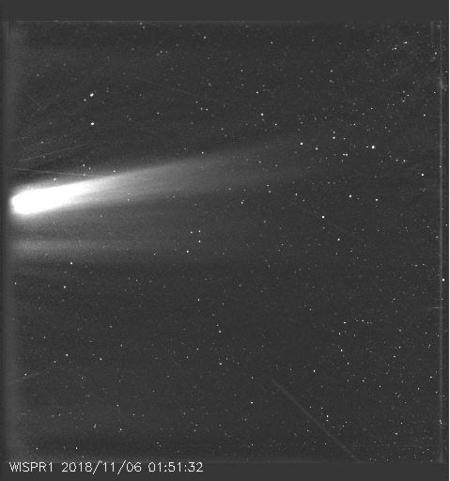 This original photograph of the sun by Bray Falls was posted to the instagram account @Astrofalls on November 30, 2020, with this caption:

A pretty rare sight occurred yesterday on the Sun. An interesting prominence began to form on the limb, zoom into the top part to see it. I was made aware of it by @simon2940. The plasma in the prominence closely follows the magnetic field lines, creating loops instead of the normal fiery shape. I also managed to get some sunspots in the FOV. Hope you all enjoy! And thanks @optcorp for the filter. The raw data for this image is available on my patreon!

Bray Falls took some questions about astrophotography and talked about some of his equipment in this YouTube video. At five minutes in, he speaks of the filters and considerations for photographing the Sun.

In January of 2020, the National Science Foundation shared an image deemed to be the highest resolution images of the Sun's surface ever taken. It was produced with the Daniel K. Inouye Solar Telescope at the National Solar Observatory in Maui, Hawaii. It is the largest solar telescope in the world.