Was an interim military U.S. government installed in the days after a fake staged inauguration of Joe Biden was broadcast, and were 80 to 140 members of Congress arrested by the National Guard in the middle of the night on January 25, 2021, and did U.S. and Taiwanese fighter jets win a war with the Chinese Communist Party in a battle in the South China Sea on January 28, 2021? No. None of this is true. This article by Judy Byington is formatted almost like a newsletter, a wrap-up of many of the conspiracy theories which were circulating before and after the January 20, 2021, inauguration of President Joe Biden. Each twist of conspiracy is summarized, and sometimes a link to an article on yet another website is offered. Most paragraphs end with a question -- "Why?" -- before moving to the next unfounded point.

The claims appear in an article published by BeforeItsNews.com on January 29, 2021, titled "US Under Military Law, Congress Arrested, War With CCP Won and No One Knows It" (archived here) which opened:

Joe Biden was sworn in as president of a bankrupt and defunct US Inc. Corporation. Just prior to his pre-recorded-in-Hollywood-by-Castle Rock Entertainment Inauguration, Washington DC, Capitol Hill and the White House were secured within miles of barbed wire fences and 60,000 National Guard troops.

Now over a week later, over 30,000 troops and the barbed wire fencing remained. Why?

An answer came early Mon. morning 25 Jan. when from 3am to 6am arrests of 80 to 140 Congress people appeared to be underway at Capitol Hill - after which Congress seemed to have disappeared. Why?

US Under Military Law, Congress Arrested, War With CCP Won and No One Knows It | Politics | Before It's News

The US was under Martial Law, many in Congress have been arrested for treason, a war with the Chinese Communist Party has ended, the US was about to be restored to elements of the original Constitution and no one even knows about it.

Judy Byington is a writer who frequently self-publishes articles on the website BeforeItsNews.com. This website has an unconventional format. Anyone can make an account and publish "news" they write themselves. In 2015 a reader named "John" wrote to Before It's News to find out, "Why are There so Many Fake Stories on Before It's News?" The site replied:

Our web site is operated differently than what most people consider to be a regular news site. This is a news hosting website and the stories that make it to the front page do so based on popularity. Anyone is welcome to post a story. The door is wide open here at Before It's News and there's no other place on the internet I know of where anyone can come in off the street, post a story and get it in front of a huge audience ...

We don't screen ANYTHING on the site, except for Terms of Service violations and when people complain.

It's You Tube for news. That's all it is.

Yes, some stories might stretch the truth and some might not even be true. You can say the same thing for mainstream news outlets, can't you? It's up to you and our audience to select the good stories.

Judy Byington is a regular contributor and many of her stories have amassed a tremendous number of views. A list of her articles on BeforeItsNews.com is here (archived here). Many of her stories are duplicated on other blogs and websites, both with her byline and without. One story published on January 14, 2021, "Inauguration Cancelled, Trump Remains in Office, ABC, NBC, CBS, Fox, CNN, MSNBC to Lose Licenses," quickly amassed 2,009,060 views. That story was debunked by Lead Stories (here).

Many of the claims that appear this article by Judy Byington's have already been debunked by Lead Stories. For Example:

This conspiracy theory is based on the false belief that the United States hasn't existed as a nation since 1871, when it became a corporation belonging to the City of London. Believers in this theory have been told that Donald Trump will be sworn in and become the 19th President of the United States on March 4, 2021.

The inauguration was a real event that was televised live by many news networks, filmed simultaneously from many different angles and thousands of people witnessed it in Washington D.C. right before their eyes. The inauguration was not pre-recorded. Lead Stories wrote about one claim that the inauguration must have been staged because of the way telephoto news camera footage altered the appearance of depth, and Lead Stories debunked another claim that the Oval Office was a movie set of Castle Rock Entertainment in Hollywood.

This claim offers a link to another one of Byington's debunked conspiracy articles published on BeforeItsNews.com, "US Military at the White House Arresting Congress." This claim is based on two things, a repost of a video shot in the early morning hours of January 20, 2021, showing buses near the Capitol, and a Washington Times article from January 21, 2021, "House cancels business during first full Biden week." The Washington Times reported that Nancy Pelosi said they won't be back in session until the beginning of February. Byington reports that 80 to 140 members of Congress were arrested and "have disappeared!" Lead Stories addressed the question of the buses spotted at the Capitol on the night before Inauguration Day by contacting a National Guard official who explained that what was captured by the video would be consistent with a shift change.

This claim from Byington links to a 'SGT Report' video that is posted to bitchute but rehosted on Rumormillnews.com. This is a type of information-laundering that floods social media with duplicate copies of false claims (again with the 1871 corporation) and amplifies voices with no credibility. The video begins by celebrating a deplatforming by YouTube as a 'badge of honor.' The guest, Brent Johnson, launches into the complex conspiracy (he claims he has 'pristine' information from sources very high up in the military and in the strategic areas of the Trump team) that the military is in charge, and not to worry, that Donald Trump is currently the president of the Republic of the United States, and that President Joe Biden is nothing more than the CEO of a now dissolved corporation from 1871.

There is no publicly available evidence of a Special Operations military raid on the CIA headquarters in Langley Virginia on Saturday January 9, 2021. Searches on Bing, Duck Duck Go and Google do not reveal any credible news reporting of such events and only refer back to the conspiracy echo chamber repeating Byington's own unfounded claim. Several of the top search results on Bing pointed to this same Byington article published on other websites including Truth11.com, newsview.gr and rumormillnews.com. Two other stories featuring military raids on the CIA appear in the mix of search results: There was the fictional report in November 2017 by radio host Hal Turner, that the Marines had stormed the CIA's Langley Headquarters, and the uncorroborated elaborate tale from Lt. Gen. Thomas McInerney that U.S. Special Forces had raided a CIA "server farm" in Frankfurt, Germany. This was debunked by Lead Stories on November 30, 2020.

Once again Byington presents baseless claims with no evidence. Donald Trump never invoked the Insurrection Act, and the 2020 election was legal. Over the course of two days, on January 6, 2021, and due to the interruption caused by rioters storming the Capitol, resuming and continuing into the early hours of January 7, 2021, the electoral votes were counted and certified. With Vice President Mike Pence presiding, former vice President Joe Biden was declared the winner of the presidential election with 306 electoral votes.

Lead Stories recently addressed a different false claim about an attempt on the life of former President Trump, this time purportedly on January 26, 2020. The U.S. Secret Service publishes press releases that include arrests of people who threaten the lives of presidents and permanent protectees. There is no public record of any such incident in January of 2021, from the Secret Service. Lead Stories had reached out to the Secret Service to inquire about the purported January 26 incident, and received a very short and to the point reply by email:

A search for the phrase "223,000 sealed indictments" only brings up duplicate copies of this article by Byington. 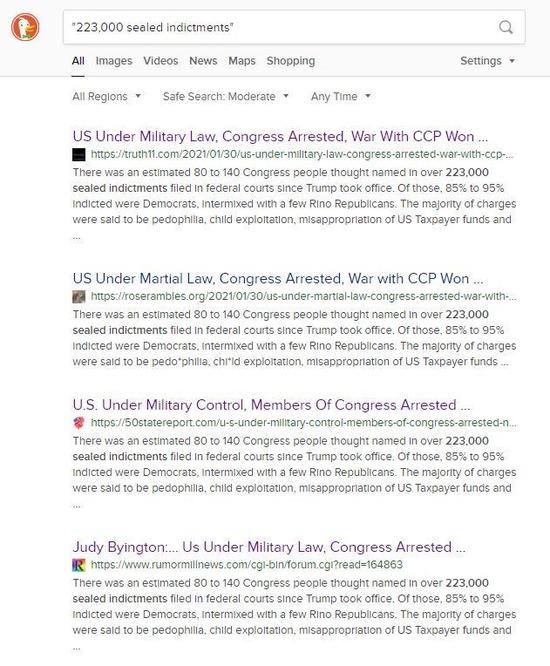 These claims against Dominion Voting Systems have been debunked and are implausible. All the votes cast in the United States are counted in the United States and there is a paper record of the votes, making it impossible for an Italian satellite to flip votes from Trump to Biden. Similar claims were covered in two fact checks by Lead Stories, here and here, and in a statement from Dominion demanding the retraction of attorney Sidney Powell's "wild and reckless allegations."

There is no publicly available statement from a former Navy intelligence officer named Simeon Parkes regarding fighter jet showdowns in the South China Sea on Thursday January 28, 2021. There was no war between the Chinese Communist Party and the United States to begin with, for that war to have come to an end. On February 9, 2021 Reuters reported on the continuing "freedom of navigation" operations with U.S. warships and aircraft in the South China Sea.

Other BeforeItsNews.com articles by Judy Byington that have been debunked by Lead Stories:

A website that publishes content submitted by users and regularly publishes false information and conspiracy theories, including about COVID-19 and the 2020 U.S. presidential election.