Was the snow that recently fell across a large portion of the world, notably in Texas and Louisiana in mid-February 2021, an unnatural substance that was made in a lab or by the government? Did it not melt away into water the way that normal snow should? Can it be burned? No, none of that is true: Using snow from February's storms, Lead Stories replicated the effects shown in viral videos as proof of something sinister. The claims of being able to 'burn' a snowball or that snow won't melt have been duplicated and circulated for years.

A recent collection of three videos that had been posted on TikTok by different people was posted (archived here) to Facebook on February 17, 2021 under the title "Tf wrong wit the snow?!!!!??". The three videos included captions like:

The recent spate of videos showing various snow melting experiments with snowballs and flames are amusing and misleading demonstrations of how normal, natural snow melts- and how incomplete combustion of butane or a candle will leave a soot deposit. This is not the first time that these perplexing snow melting tricks went viral on social media, in 2014 a late January winter storm impacted parts of the U.S. which rarely see snow. Atlanta Georgia was hit particularly hard with 1-3 inches of snow and ice. Two weeks later a record-breaking storm brought an additional 2-4 inches of snow to Georgia and South Carolina. The snow tricks first went viral then.

There are many other videos. One posted to Youtube on February 17, 2021 titled "Texas Snow sure seems odd," features a woman's experiment holding a votive candle to a snowball. She claims that the snowball is burning, that "it's just disappearing." She concludes by holding the blackened snowball up and declaring:

That's not real snow. Nope. Not sure what this is, but not snow. 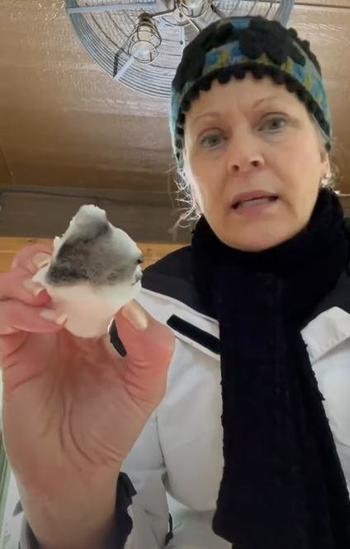 An article from Popular Science on February 4, 2014 addressed the viral hype "Why 'Fake' Snow 'Doesn't Melt'--Because It's Real" includes a YouTube video made by Phil Plait, an Astronomer and science writer who lives in snowy Boulder, Colorado. The main lesson Plait demonstrates is:

...when snow melts, the water is absorbed by the remaining loosely packed snow. This is how snow cones hold onto their delicious sugary water, and explains why they are so delicious. And the black char marks are traces of soot from the lighter fluid.

This video's dramatic finish 04:27 minutes in, shows a time lapse of a snowball in a hot pan- shrinking down without any melted snow-water puddling. When the snowball is almost gone and can't absorb any more, it suddenly liquifies, demonstrating the amazing absorbency and wicking power of packed snow. Even when the heat is under the snowball, the wicking action pulls the melted liquid up into the snowball until it cannot absorb any more water.

The black mark left on the snowballs is soot, it is not burnt snow. Soot is the carbon released as a result of the incomplete combustion of a fuel, including fuels like candle wax, lamp oil or butane.

One of the TikTok videos features a man claiming that the snow looked like it has been made in a lab. Indeed, the snow he handled had an unusual pelleted but fluffy texture. This is called graupel or soft hail, and it is the result of rime forming on snowflakes. 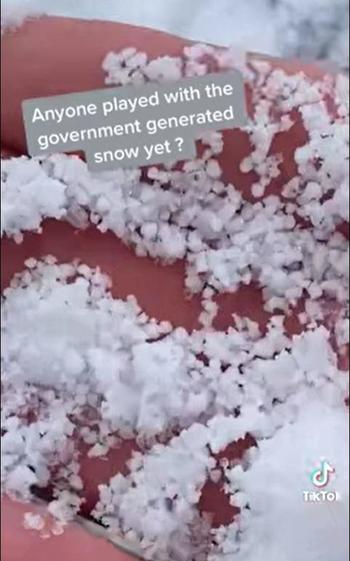