Did a Fox affiliate broadcast a segment with a chyron that read, "90% of women have a back-up lover"? No, that's not true: This photo of an on-screen chyron has been photoshopped. Images that closely match this one date back to September 26, 2014, and show that the chyron originally said 50%, not 90%. Lead Stories discovered additional reporting citing the same source - online market research company OnePoll - though with discrepancies in the reported numbers.

A reverse image search using TinEye, with the results sorted by date, earliest first, shows a near-identical image was found online by the TinEye crawler on September 26, 2014. This photo shows the chyron displaying the statistic 50%, not 90%. 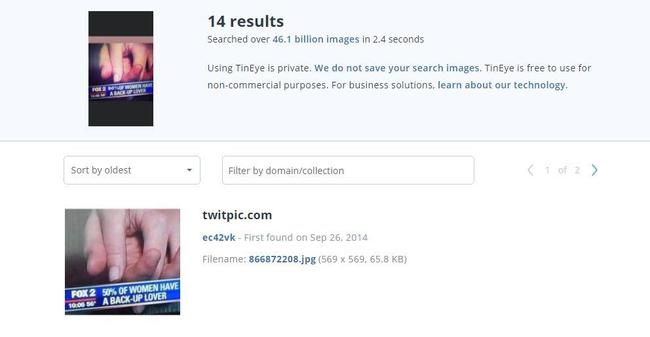 The date this photo originally appeared corresponds with the timing of a story that was reported by many media outlets in late September and early October 2014. Lead Stories was not able to locate a copy of the original FOX 2 broadcast or determine which of the several "Fox 2" stations in the U.S. (Detroit, St. Louis, Mo and the Bay Area of California among them) was the source of the original image.

This Fox 35 News Orlando segment posted on YouTube on September 29, 2014, was about the survey and reported the number as 50%.

The DailyMail.com published an article on September 25, 2014, titled, "HALF of women have a fall-back partner on standby who has always fancied them, in case their current relationship turns sour." The Daily Mail reported that this information was drawn from a survey of 1,000 women conducted by the online market research company OnePoll.

A spokesman for online market research company OnePoll.com said: 'For our research to establish that 50 per cent of women in relationships have a 'Plan B' is a worrying sign.

This news may cause a few men in relationships to think twice about not taking the rubbish out or choosing a night down the pub in favour of a cosy night in with his partner.

Another publication pressandjournal.co.uk published a story on September 23, 2014, titled "Men, behave! Your other half may have a 'backup boyfriend'" This article also cites OnePoll as the source of the data, but the numbers are not the same as what was reported by the Daily Mail. The Press and Journal article also has an infographic which is credited to OnePoll.

A survey by OnePoll.com has found that 43% of women have a man to go running to should things with their current partner come to an end.

What's most worrying to current boyfriends is that the backup is likely to be an 'old friend' who holds a flame for the woman, or an ex-boyfriend or colleague.

And adding salt the wounds, the backups are ready and waiting to take care of 'unfinished business.'

The infographic shows that 2000 women were surveyed and 43% had a 'backup man'. 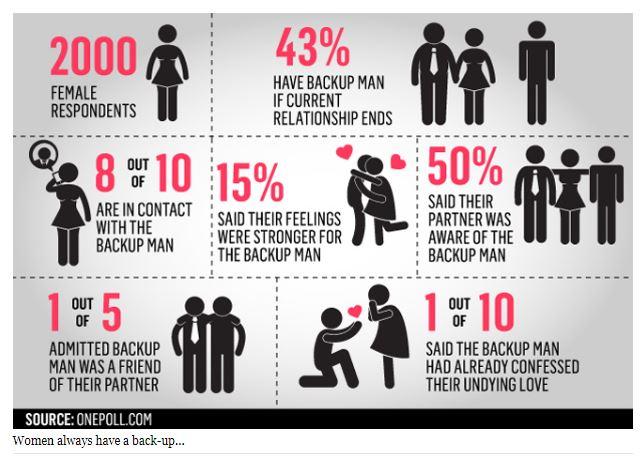 Lead Stories reached out by email to OnePoll for clarification about this survey and the inconsistencies in the numbers reported by several media outlets that cited the OnePoll survey in late 2014. We will update this fact-check, as appropriate, when OnePoll responds.