Is the Gates Foundation a multinational corporation that profits from vaccines as part of a U.S. government plot hatched in the 1970s to depopulate developing countries? No, that's not true: The Bill & Melinda Gates Foundation is a registered nonprofit that doesn't pay dividends or capital gains to shareholders. The video cites a declassified 1974 document as proof of the de-population conspiracy, but public documents show the U.S. goal has been poverty reduction through family planning, a non-secret policy that dates to 1961.

The claims appear in a video (archived here) uploaded to BitChute December 26, 2020, under the title "THE EVOLUTION OF BILL GATES - WHY HE SWITCHED FROM MICROSOFT TO VACCINES". It opened:

Bill Gates declared vaccines "The best investment I've ever made...over a 20-to-1 return." 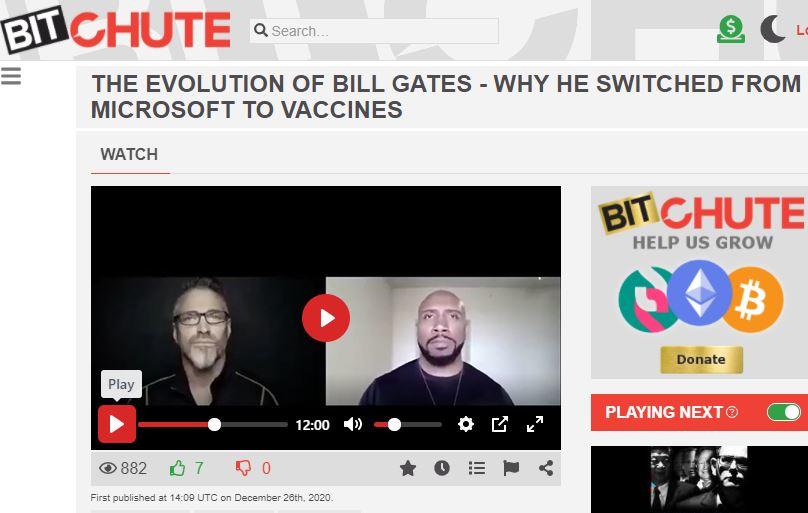 The 23-minute, 27-second video recycles claims made in the two "Plandemic" films that were banned by YouTube, Facebook and other social media platforms for promoting COVID falsehoods. In those films, and this one, producer Mikki Willis promotes false claims about the origins of COVID-19, the effectiveness of masks and the danger of vaccinations.

This fact check will only address in detail the claims made in the video about Bill Gates profiting from vaccines and carrying out a plot from the so-called "Kissinger Report."

'The best investment I've ever made...'

The "best investment I've ever made" quote is verbatim what Gates wrote in a January 16, 2019, essay for the Wall Street Journal.

But, stripped of context in the film, it sounds like Gates is discussing his personal financial gains from vaccines, an often-repeated falsehood on anti-vaccine websites.

The point Gates was making was that vaccination programs were the best way for the Gates Foundation to have an impact. By preventing the spread of disease, vaccines reduce health care costs, lost wages and other expenses of epidemic and childhood diseases:

The $10 billion that we gave to help provide vaccines, drugs, bed nets and other supplies in developing countries created an estimated $200 billion in social and economic benefits.

In that essay, Gates explains that the Foundation teamed with the Copenhagen Consensus Center to calculate the financially measured impact of four options:

The taken-out-of-context "best investment" quote is just one of several ways this video demonstrates how authentic material can be used to create a false impression.

The narrator opens the video by framing the establishment of the Bill & Melinda Gates Foundation as a way for the Microsoft founder to improve his damaged public image. Portrayed in a 2000 U.S. government antitrust action (which Microsoft lost, appealed and then settled) as a "ruthless tech monopolist," the narrator says, Gates donated $100 million to start his poverty- and disease-fighting foundation and became the "world's most generous philanthropist." That's an opinion, but built on publicly available credible evidence.

But at 1 minute, 29 seconds, the narrator says, "His net worth swiftly doubled, earning Bill Gates the title of Richest Man in the World." The narrator does not make clear that it was not the Foundation making Gates rich, but his stake in Microsoft and other business interests.

The narrator follows that up, at 2 minutes, 29 seconds, with this claim: "The Gates Foundation expanded rapidly into a massive, vertically integrated multinational corporation, controlling every step in a supply chain that reaches from its Seattle-based boardrooms to villages of Africa and Asia."

The Gates Foundation is not a corporation and does not distribute dividends or capital gains to private stakeholders, the way a corporation does.

The Foundation operates tax-free as a donation-collecting-and-distributing nonprofit charitable organization under 501(c)(3) of the IRS code. In its most recent available IRS return, none of the five highest-paid executives are Bill or Melinda Gates and there is no record of the Foundation contributing to Gates' personal holdings, which would be a major violation of its 501(c)(3) status.

'There is a policy of the U.S. government. It's called "The Kissinger Report"'

At 10 minutes, 49 seconds in the video, a new voice says the goal of U.S. policy is not just to promote family planning to reduce poverty, but "to shrink the population" of Africa so that mineral resources will be available. "There is a policy of the U.S. government, it's called 'The Kissinger Report,'" the disembodied voice says. "It explicitly states the purpose of the foreign policy in Africa was to reduce the population because they had great mineral resources there ... we in the United States, we need them."

The film recycles a version of anti-vaccine conspiracy claims that depopulation will be carried out with vaccines controlled by a cabal of wealth- and global-dominion-seeking elites who variously include Gates and Dr. Anthony Fauci, director of the National Institute of Allergy and Infectious Diseases.

Lead Stories reached out to officials of USAID and the State Department in search of any documented evidence to support the film's claim that the 46-year-old Kissinger Report still stands as foreign policy and that lethal or sterilizing vaccines are a mechanism of U.S. policy.

A State Department spokesman wrote, in a March 23, 2021, email to Lead Stories:

Certain aspects of agency-commissioned reports can be incorporated into policy, but the question of whether the entirety of a fifty-year-old report is U.S. policy is challenging -- to say the least -- to answer. The U.S. Agency for Interntional Development outlines its objectives, programming, and position on family planning and reproductive health here.

The so-called Kissinger Report was prepared for then-Secretary of State Henry Kissinger in 1974. "Implications of Worldwide Population Growth For U.S. Security and Overseas Interests" was adopted as foreign policy by the administration of President Gerald Ford, but the film is incorrect that the idea originated with Kissinger. What the study proposed meshed with U.S. policies in place since 1961, when the Foreign Assistance Act began funding family planning services to reduce birth rates in developing countries.

The USAID timeline shows several family planning/population control programs were in place by the mid-1960s, a decade before the Kissinger Report bluntly made the point that fast-growing countries with high poverty were more likely to be unstable and a threat to U.S. economic interests. This concept is the underpinning for U.S. foreign aid to countries the world over. It spawned the creation in 1968 of Zero Population Growth, whose supporters, many of them U.S. progressives, wore "Stop At Two" buttons to encourage population control in the U.S.

Nowhere in the now-declassified Kissinger Report is lethal or sterilizing vaccination proposed. The film juxtaposes its claims about depopulation policies with ominous clippings of news reports from India about vaccination programs gone wrong and the claim, at 5 minutes, 5 seconds in the film, that the Gates Foundation has been "kicked out of India" as a result of deaths there. India's health ministry issued a press release affirming Gates Foundation was not kicked out and still works with the country's disease prevention program.

Though Gates Foundation support for vaccination projects has at times been controversial because of unexpected reactions, the film's claims that Gates Foundation vaccine programs kill residents of developing countries are not supported by publicly available credible evidence.

For instance, a human papillomavirus inoculation study that the Gates Foundation funded in India was suspended after several girls died. But, Science Magazine reported most of the deaths were later found to have been caused by drowning and other unrelated trauma.