Does this photo show people praying over, or even "worshipping" a golden, life-sized graven image of former President Donald Trump? No, that's not true: It is an altered photo. The actual photo, taken January 3, 2020, shows a group of Trump supporters, eyes closed with outstretched hands, praying over the actual president at an "Evangelicals for Trump" coalition event in Miami, Florida.

Look I haven't read the

Bible in a long time but

I'm pretty sure there's a

part that said not to do

The altered photo was widely circulating March 2, 2021, on social media, after the golden statue of Trump was wheeled into the lobby of the Conservative Political Action Conference in Orlando, Florida, which ran February 25-28, 2021.

The doctored photo shows a half-dozen people, but a few additional outstretched hands captured in the frame offer a hint that the group could have been much larger. The Trump statute, edited in to replace the real Trump in the altered photo, has a head and hands with a flashy gold color. The figure is wearing a blue suit jacket, a red tie, and a red-white-and-blue shirt with a United States flag motif.

As in the Facebook post mentioned above, many others sharing the altered photo on social media made reference to the Ten Commandments' prohibition against "graven images" (statues) or perhaps the biblical story in Exodus 32 of Israelites rejecting their faith and worshipping a statue of a golden calf, provoking Moses' tablet-smashing wrath. (National Geographic offers an animated account of the biblical story.)

In the actual photo taken last year, which can be found on the Getty Images website, Trump stands in a blue suit, surrounded by his supporters. He wears a serious face, his arms hang low in front of him, with hands crossed. Trump is the only one in the photo with his eyes open.

Here is a screenshot of one of the many recent reports of the Trump statue at CPAC, which people appeared to be using as a prop for selfies. 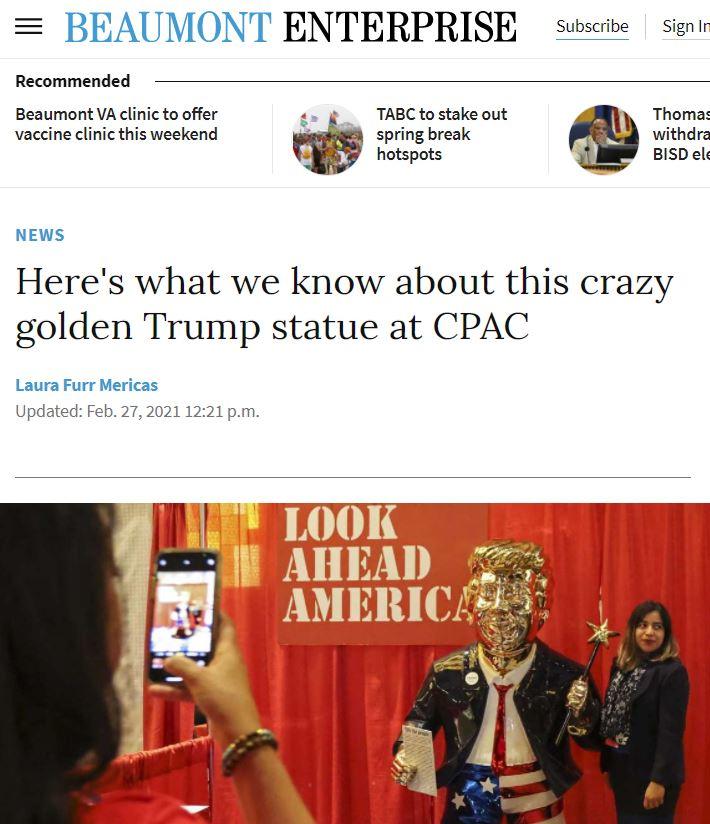