Did former President Donald Trump start a new social media platform called "DJTUP Uncensored Platform Uniting People"? No, there is no publicly available evidence it is Trump's. Former President Donald Trump did announce the launch of his website called 45office.com on Monday March 29, 2021, and a spokesman talked about Trump's plans to start his own social media platform in the next few months -- but there is no indication that the website DJTUP.com is associated with Donald J. Trump.

A surge of link sharing began on Facebook on March 29, 2021. One example is a post (archived here) published by "Florida Conservative Women" on March 30, 2021. It was captioned:

Sign up for the DJT social media platform now. Live in a few weeks.
https://djtup.com/index.php 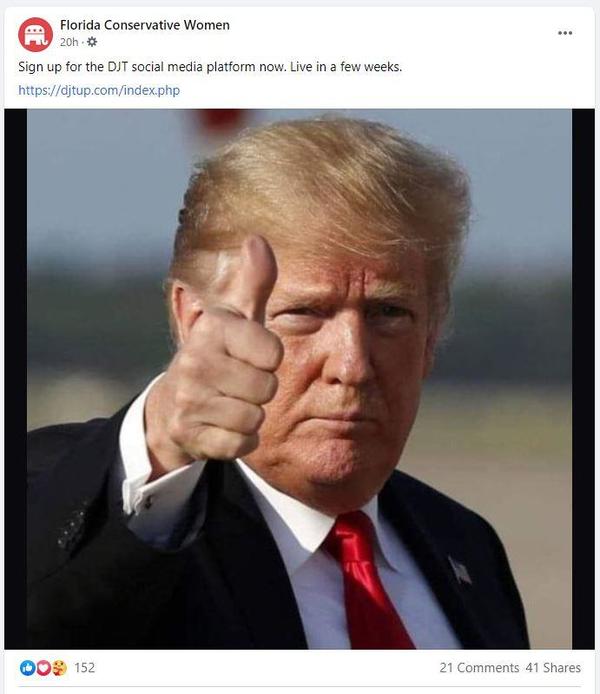 Trump spokesman Jason Miller said in March, 2021 that the former president might start his own social media platform, but there is no proof that this website DJTUP.com is Trump's While it is not clear who is behind the DJTUP.com website, the connections that are visible do not point to Donald J. Trump being behind the website, which would not be consistent with the Trump Organization's branding, which emphasizes the Trump name in connection with its businesses.

Not only does the website not appear to be run by the Trump family, the website does not appear to be a precursor to a social media platform. In its current state, there is no evidence of staff with sufficient software engineering knowledge who might build a functioning and secure social network.

At the bottom of the DJTUP.com homepage is a banner boasting of the various big-name press outlets that have covered its launch. They haven't. A reverse image search for the "as seen on" image reveals that exact banner with the identical collection of 23 news outlets has been used to promote several other websites such as this wholesale distributor and this tax adviser. Searches for "DJTUP.com" mentioned in a random sample of the media outlets came up empty each time. 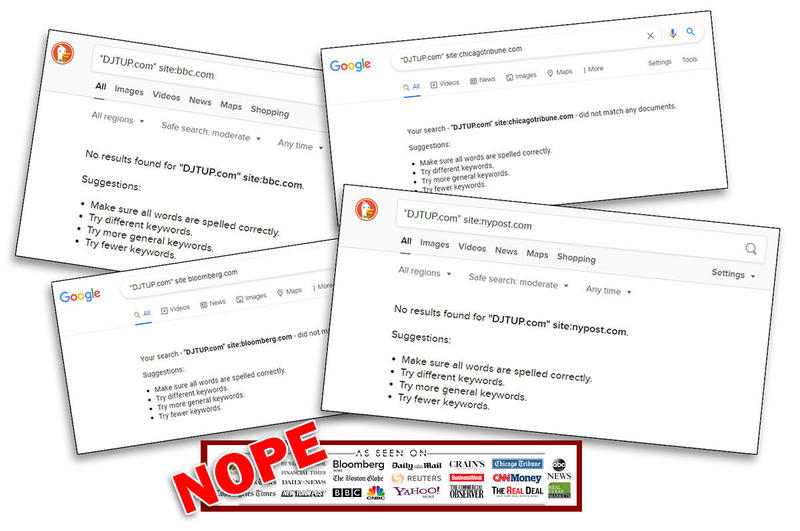 On March 29, 2021, former President Trump and former first lady Melania Trump sent an email announcing the launch of his website 45office.com. A week earlier, Donald Trump's senior adviser, Jason Miller, spoke with Fox News "#MediaBuzz." A video of that interview is included in this article, "Trump returning to social media with 'his own platform' in 2-3 months: adviser." Neither Donald Trump nor Miller have said anything about DJTUP.com. On March 21, 2021, Miller told Fox's "#MediaBuzz":

"I do think that we're going to see President Trump returning to social media in probably about two or three months here, with his own platform and this is something that I think will be the hottest ticket in social media, it's going to completely redefine the game, and everybody is going to be waiting and watching to see what exactly President Trump does.

Some posts on Facebook confused the issue further by sharing a link or an article about the launch of Donald Trump's real website, 45office.com, as well as a link to DJTUP.com in the caption of the post. Below are examples of posts that include links to Trump's real website and the site from an unknown source. 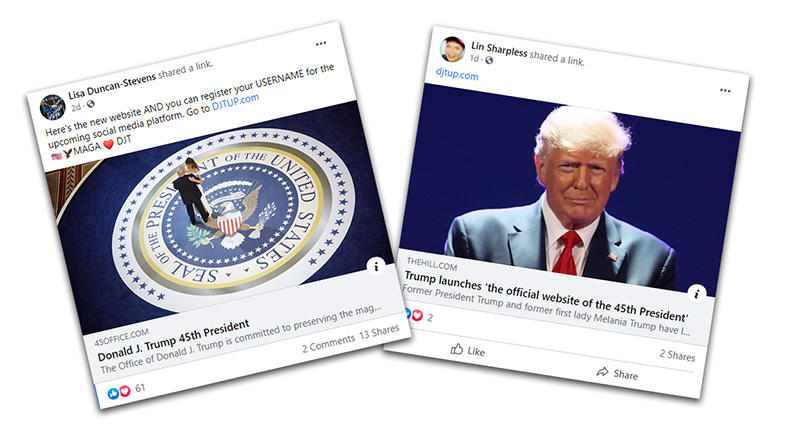 The website DJTUP.com was registered on January 10, 2021, and the identity of the person registering the website remains private. This domain registry information is available to the public at icann.org. 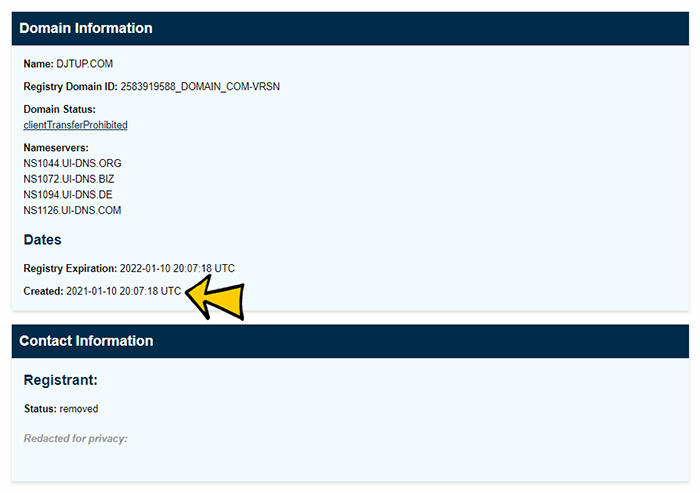 We've done some digging into the DJT UP platform we came across and have noticed some high profile names have already been reserved. Including @realDonaldTrump @IvankaTrump @DonaldTrumpJr and @EricTrump
Could this mean the #Trump family is behind it? We'll keep digging. 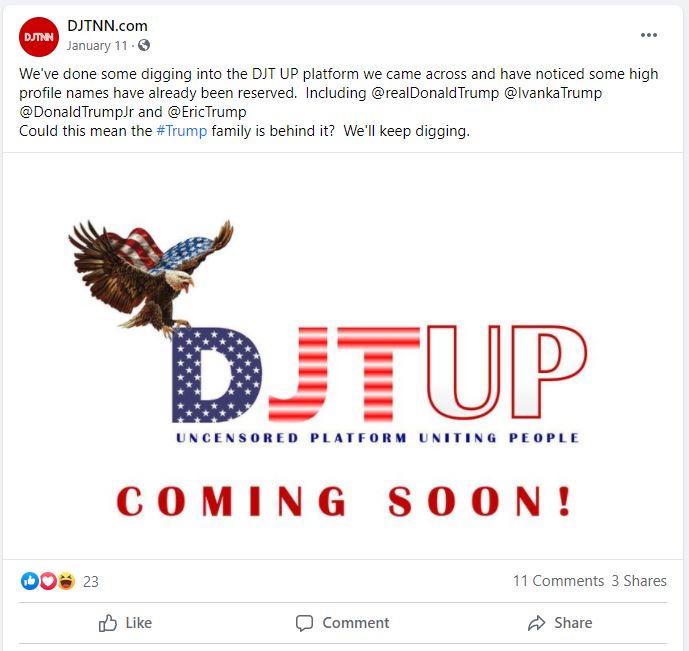 The website associated with that Facebook page, DJTNN.com also posted on January 11 and dropped some hints about DJTUP.com without claiming any affiliation. The site wrote:

We've stumbled across a little corner of the web where it appears some sort of social media company is planning on emerging with an uncensored platform. It looks like a very patriotic site.
There Terms of Service appear to contain the United States Constitution. We're only speculating, but President Trump did suggest he may start his own platform.

Check it out at https://djtpup.com and let us know what you think.

A search for the IP address of DJTNN.com using a service like Domaintools.com shows that the IP address (internet protocol address) of that website and DJTUP.com are the same. Not all websites hosted at the same IP are necessarily all owned or managed by the same person, but in this case the connection between the two websites is clear. 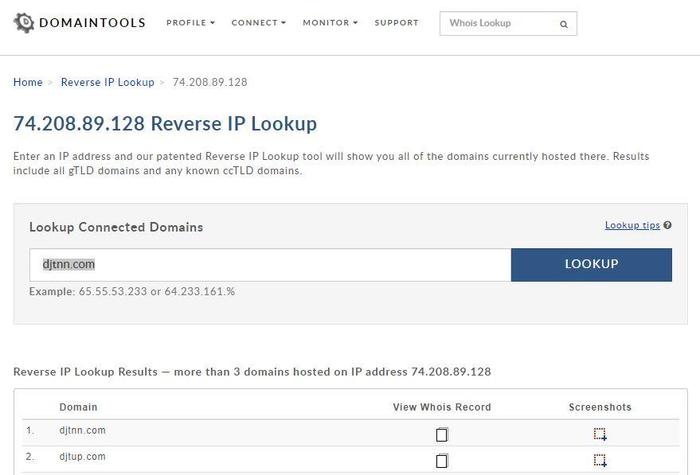 The Twitter account for DJTNN posted on March 31, 2021 (archived here). The post relayed the information that the DJTUP.com site would be making an announcement at 1 p.m. the following day, April 1, 2021. One commenter replied, "I think it's going to be a massive April Fool's Joke..." 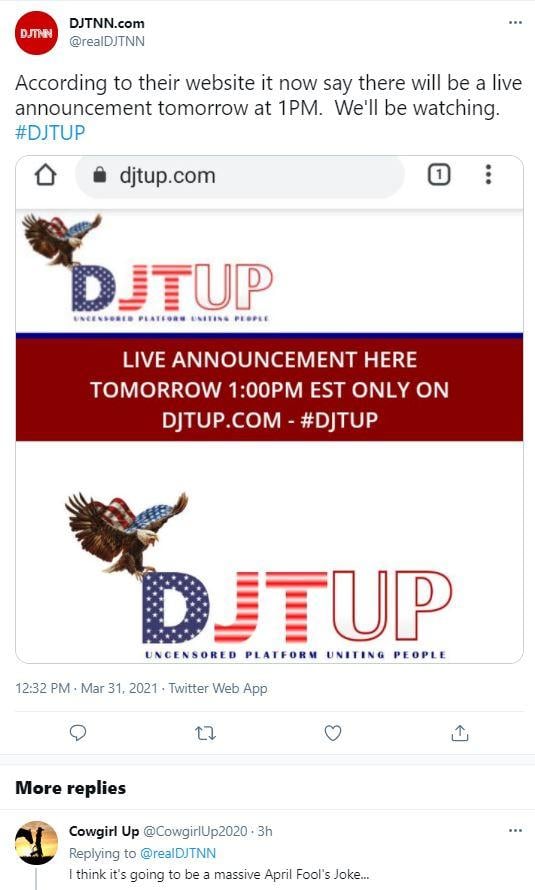 Whether this website turns out to be an April Fool's prank remains to be seen. Many people have signed up using their email to reserve a username with the belief that this was a website coming from former President Donald J. Trump. Lead Stories received email saying a username was reserved for Lead Stories and encouraging us to claim it.

Update: On April Fool's Day the DJTUP.com posted a video which displayed a countdown message and then revealed this was a prank:

Lead Stories reached out by email to the press contact at 45office.com for comment and will update, as appropriate, if they reply.