Have there been over 2,342 fatalities from the COVID-19 vaccine and were Hank Aaron and "Marvelous" Marvin Hagler killed by a vaccine? No, that's not true: There is no evidence of these claims. The Centers for Disease Control and Prevention stated on April 13, 2021, that while there have been more than 3,000 "reports of death (0.00158%) among people who received a COVID-19 vaccine," there is no evidence that vaccination contributed to patient deaths. Lead Stories previously reported there was no evidence Hank Aaron or "Marvelous" Marvin Hagler were killed by the COVID-19 vaccine.

The rollout is going so much worse than even the worst case estimates of the fiercest critics. Yet it makes no difference on the mainstream narrative because the people in charge are psychopaths. 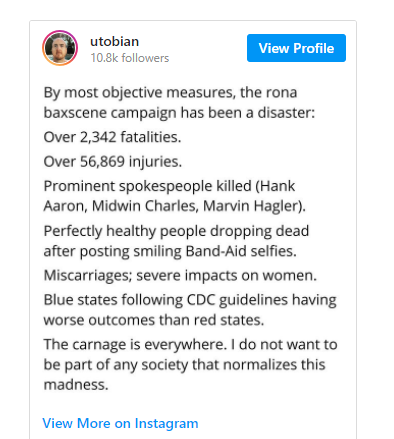 Lead Stories will break down two claims in the post. The first, that there have been "over 2,342 fatalities," presumably from the COVID-19 vaccine, is not backed up by any available public data and doesn't match any numbers found on the site that collects reports of adverse reactions post-vaccination.

As Lead Stories has previously reported, one cannot assume deaths reported on the VAERS (Vaccine Adverse Event Reporting System) website are connected to the COVID-19 vaccine. The deaths and other reactions are simply listed, but not proven to have been caused by any vaccine. The U.S. Centers for Disease Control and Prevention (CDC) monitors the reports and if patterns emerge, then investigates them.

Anyone can submit a report of a death or other health event to VAERS. The list is not sufficient evidence to establish whether an adverse event, such as death, was caused by a vaccine. The CDC emphasizes this on its website. "To date, VAERS has not detected patterns in cause of death that would indicate a safety problem with COVID-19 vaccines."

Over 189 million doses of COVID-19 vaccines were administered in the United States from December 14, 2020, through April 12, 2021. During this time, VAERS received 3,005 reports of death (0.00158%) among people who received a COVID-19 vaccine. CDC and FDA physicians review each case report of death as soon as notified and CDC requests medical records to further assess reports. A review of available clinical information including death certificates, autopsy, and medical records revealed no evidence that vaccination contributed to patient deaths. CDC and FDA will continue to investigate reports of adverse events, including deaths, reported to VAERS." 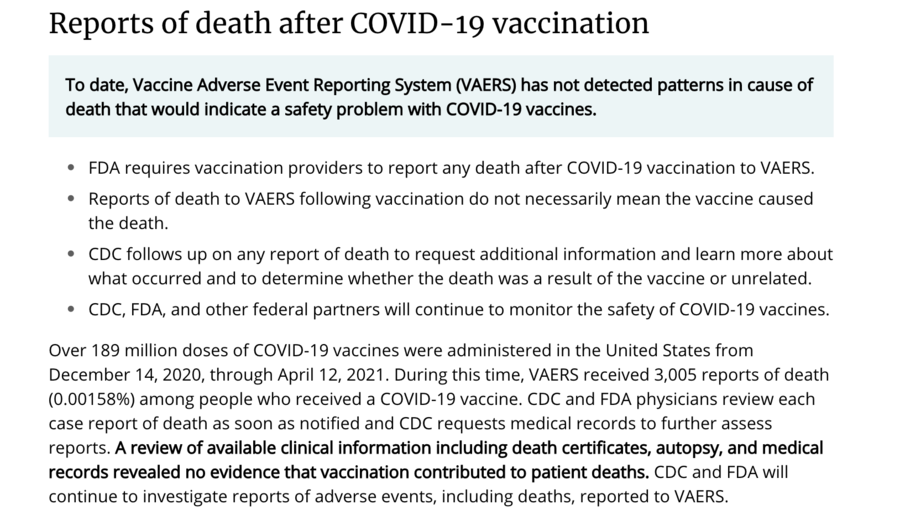 As Lead Stories previously reported, there was no publicly available evidence that the deaths of baseball great Hank Aaron and famed boxer "Marvelous" Marvin Hagler were caused by the COVID-19 vaccine. Hagler's wife said the vaccine "for sure" did not cause the death of her husband. Aaron's death was similarly not related to the vaccine, according to the medical examiner's office in Fulton County, Georgia.