Did Denmark's top health official faint from a COVID shot? There is no evidence backing this claim that the vaccine is what caused her to faint. On April 14, 2021, Tanja Erichsen, the head of the drug monitoring unit of the Danish Medicines Agency, fainted on camera during a press conference while the director general of the Danish Health Authority, Søren Brostrøm, was speaking. There is no publicly available information linking this fainting spell to a COVID-19 vaccine.

The claim appeared in a post (archived here) published on April 17, 2021. It was captioned, "Down she goes! #TrustTheExperts VC: @humberto.lvx" The text added to the video read: 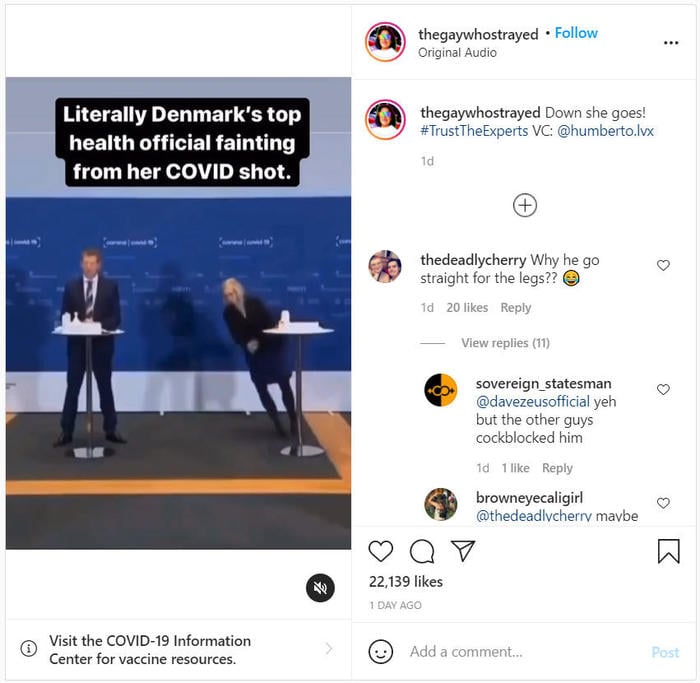 In an April 14, 2021 press briefing, officials from the Danish Health Authority and the Danish Medicines Agency announced that Denmark would be dropping the AstraZeneca vaccine from the national COVID-19 vaccine program because of rare but serious side effects. The AstraZeneca vaccine had already been on pause in Denmark since March 11, 2021, over reports linking it to severe blood clots. As Brostrøm, director general of the Danish Health Authority, was speaking, Tanja Erichsen, the head of the drug monitoring unit of the Danish Medicines Agency, toppled over, unconscious, onto the floor. There are several reasons why a person might lose consciousness and it is not publicly known what caused Erichsen's fainting spell.

It was widely said on social media that Erichsen is the top health official in Denmark. While she does have a senior position as the head of the drug monitoring unit, it is only one of several units that together have an acting director, Mette Aaboe Hansen. Erichsen does not hold the highest position of the Danish Medicines Agency. and Brostrøm is the director general of the Danish Health Authority (in Denmark this agency is called "Sundhedsstyrelsen").

After the incident at the press briefing, the Danish Medicines Agency posted a tweet but did not make any information known about what might have caused the fainting spell. Translated, it reads:

Our head of drug monitoring, Tanja Erichsen, fainted during today's press conference. She is conscious again and is okay under the circumstances, but for safety's sake she takes a trip by ambulance to the emergency room to be checked.

On April 19, Erichsen posted an update to her own Twitter account. She did not provide any information about what might have caused the spell, her message translated as:

Thank you all very much for your care and greetings - it's whimsical. It was a hard blow my head had to accept, but luckily I am in good recovery now. It has meant a lot to me with the great support I have received both here on Twitter and on other platforms. A HUGE thank you-