Are hundreds of electric cars sitting in a lot near Paris because of failed battery systems and barriers to repair? And are these stockpiled electric cars now leaking battery toxins into the ground? No, that's not true: These photos are authentic but the captions attached to them does not tell the true story of why all these identical cars are parked in this lot. The electric cars were part of a pioneering subscription car-sharing system in Paris called Autolib that was run by the Bolloré group. The program began in 2011 and was suspended due to financial issues in 2018. The cars were moved out of Paris to a city about 125 miles away, Romorantin-Lanthenay. The local fire department in Romorantin-Lanthenay has dictated how the cars should be stored on this lot, and the batteries have all been removed. Most of the cars from the Autolib program were refurbished and have been sold to private owners. The cars that were not in condition for immediate resale now belong to two different companies, Autopuzz and Atis Production, who will be in charge of what happens to them next.

This electric car graveyard received attention on social media through a March 5, 2021, post, illustrated with photos, by an electric car blogger. Those photos were later reused, coupled with a caption that misrepresented the story behind these cars -- as seen in this post (archived here) published on May 16, 2021, with the captioning:

This is a boneyard near Paris, France with hundreds of electric powered cars. Mind you these are only cars used by the City of Paris and not personal vehicles. All of these have the same issue,.... the battery storage cells have given out and need replaced. Why not just replace them you ask? Well two reasons. First the battery storage cells cost almost double what the vehicle cost new, and second no landfill or disposals will allow the batteries to be disposed of there. So these green fairy tale electric cars are all sitting in vacant lots while their batteries drain toxins into the ground.
Still think we need to go green??? 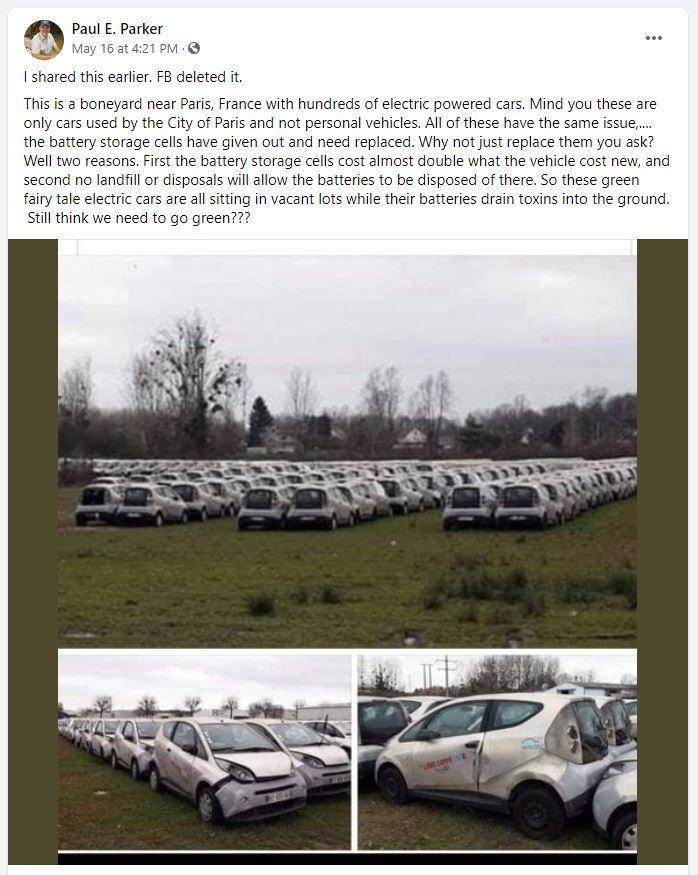 The post claims that these electric cars -- a model called the Bluecar -- had to be retired because their batteries failed and it was too expensive or impractical to fix them. But these were the Bluecar fleet of the Autolib program, a car-sharing program in Paris that was closed on July 31, 2018, because it was deemed to be not economically viable.

The post caption begins by stating that this "boneyard" is near Paris, but these photos show a storage lot that is a two-and-a half-hour drive from Paris. The reason these cars were transported all the way to the city of Romorantin-Lanthenay is because the former Matra auto manufacturing plant was there, with a large paved car lot capable of holding hundreds of cars. Nearby to that facility is another piece of unpaved land that is now being used as the storage lot for some of the retired Autolib cars in poor condition.

The suggestion that the cars in the photo are leaking battery toxins onto the ground is false. The car's batteries have been removed. On March 5, 2021, francetvinfo.fr published an article with a title that translates to, "What will become of the cumbersome Autolib 'piled up in the "cemetery" of Romorantin?" The article covers many of the questions surrounding the decommissioned electric cars from Paris. Paul Aouizerate, the manager of Atis Production, the company that owns the cars in the photos and the lot where they are stored, was quoted:

Our vehicles are stored properly. The firefighters are aware, the site is well organized. All the batteries have been removed, the connectors are isolated.

The final claims also are built on faulty suggestions that the battery storage cells cost almost double what the vehicle cost new, and that no landfill or disposals will allow the batteries to be disposed there. The Bolloré group's business model does not sell the Lithium Metal Polymer (LMP) batteries with the Bluecar. Originally in 2011 these were only fleet vehicles in car-sharing programs -- the cars belonged to Bolloré. Eventually this expanded to private car leases, and finally in 2013 this opened up to private car sales -- but with the exception that there is an additional monthly lease on the battery. The refurbished retired car-sharing fleet vehicles now sold by Autopuzz do include full ownership of the battery. Ecological incentives and bonuses for diesel and gas trade-ins further reduce the price of a used Bluecar. A quote in the francetvinfo.fr article from a Romorantin autorecycler explains the Bolloré group will take back all old batteries and recycle them. This is confirmed on page 107 of the 2020 annual report from the holding company de l'Odet:

IER also offers its customers to take advantage of the recycling solutions it has put in place with its certified service providers for earlier products not concerned by regulations, as well as for installations outside Europe. It's the case in North America, where the recycling of electronic products ultimately life is not yet regulated: IER, at the customer's request, offers a offer for dismantling, packaging and repatriation of equipment to the factory. The recovered metal is then recycled and the electronic waste transferred to specialized organizations.

In a September 28, 2015, article in Autonews.com, "Bollore may sell electric cars in U.S." Cedric Bollore, Bolloré Group's vice president for development, was speaking about what might be in the future in the context of the launch of Blue Indy, a car-sharing program similar to Autolib which ran for five years in Indianapolis, Indiana. As in Paris, Blue Indy eventually ceased operations in 2020 because it was not as profitable as had been projected. The article finished by addressing the question of the LMP batteries which are made in France and also in Quebec:

The batteries have such long lives, they are often used in more than one car. First you put it in a car. Then you will put it in another car, if the [original] car [is] not any more usable. After that, you will still use it for stationary applications. It will still be usable to store energy.