Does a 10-second video clip show President Joe Biden "again" inappropriately kissing a young boy? No, that's not true: The clip, from 2015, shows Joe Biden comforting his grandson, Robert Hunter Biden, at the funeral of the child's father, Beau Biden. Joe Biden strokes his grandson's hair, and kisses him on the cheek and puts his hand on the boy's shoulder. In many families, these are typical and appropriate public gestures of comfort and affection.

The recycled claim from a TikTok video appeared in an Instagram video clip (archived here) where it was published by tristan_leonetti on May 2, 2021, with the caption:

Hide yo kids, Hide yo wives, creepy Joe is back at it again.. 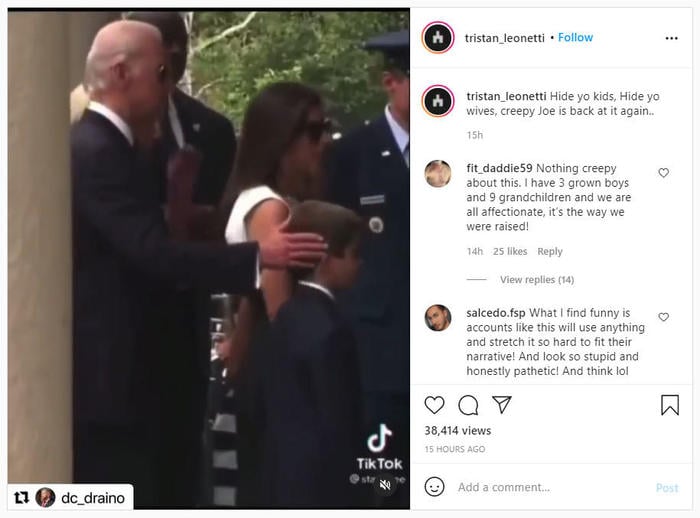 The 10-second-long video clip has a music track added -- a clip of the 2006 hit single, "Promiscuous" by Nelly Furtado, featuring Timbaland. The post's caption, "Creepy Joe is back at it again." implies that this is a recent video of something that just happened, when in fact the video was almost six years out of date at the time this fact check was written.

Joe Biden, who at that time the video was taken was vice president, announced the death of his son Beau, who died of brain cancer, on May 30, 2015. The funeral of Joseph Robinette "Beau" Biden III took place on June 6, 2015, at St. Anthony of Padua Catholic Church in Wilmington, Delaware, the state where Beau Biden had been elected attorney general.

This C-Span footage shows the context from which the 10-second clip was lifted: the Biden family gathered before the funeral service. A ceremonial bagpipe band and the New Castle County mounted police preceded and announced the arrival of the hearse. Upon arrival at the church, an honor guard carried the casket from the hearse into the church as the family watched, standing together outside. Then the Biden family formed a procession line with Beau Biden's widow Hallie Olivere at the front. Her two children, Natalie and Robert Hunter on either side, held her hands.

Next in line behind Olivere, were Jill and Joe Biden. As the family stood waiting for their cue to enter the church Joe Biden made the comforting gestures to his grandson who was about to lead the family into the church for his father's funeral. The moments captured in the TikTok video occur just after the nine minute, 39-second mark in the C-Span video embedded below.