Did a woman captured on video falling off her chair at a COVID-19 vaccine clinic die? No, that's not true: No evidence of her death was presented by those using the video to discourage vaccination. There is ample evidence two women suffered fainting spells at a vaccine clinic held for teachers at the Poliforum convention center in León, Guanajuato, Mexico, on May 4, 2021. The teachers' fainting spells were reported in local news: both women recovered at the scene and did not require hospitalization.

The video which captured one of the women fainting was disseminated by anti-vaccination activists with false claims that the woman had died. One example is a post (archived here) where it was published on May 11, 2021 with the caption:

On May 5, 2021, proceso.com reported, "Sufren desmayo dos maestras vacunadas contra el covid-19 en Guanajuato" -- translated: "Two teachers vaccinated against covid-19 in Guanajuato suffer fainting". The article, translated, explains that this happened the day before, on May 4:

On the first day of vaccination for teaching staff in the state, two teachers who went to the headquarters of the Poliforum to receive the vaccine against COVID-19 suffered fainting.

Both were treated by medical personnel who were in the place and they recovered right there, although they remained under observation for more than half an hour, which is what the protocol for vaccination establishes.

Another article by am.com.mx titled, "Two Teachers from Guanajuato faint after receiving COVID vaccine" reported the incident as well. A photo included in that article is captioned, "A primary school teacher in her 50s is cared for by a nurse after receiving the vaccine at the Poliforum de León." This woman fainted due to low blood pressure and was cared for by state emergency paramedics who were on hand, the article said.

A related article from am.com.mx titled, "Teachers are in joy: They vaccinate 34 thousand against COVID on the first day" includes an additional photo of the first teacher as well as a screen capture from the now viral video of the other teacher who fainted. In both images the women are on the floor being tended to by paramedics.

The second teacher who fainted was in her 20s. Both articles report that she explained that the fainting was brought on by panic due to her fear of needles.

Am.com.mx reported 12,584 doses of the CanSino vaccine, a single-dose vaccine, were administered on the first day of the event at the Poliforum. Vaccination clinics for teachers were also held at three other locations for a total of 34,191 vaccines given that day, with the two incidents of fainting being the most serious reactions that were observed.

On May 6, 2021, the Guanajuato secretary of health shared a video from the "Secretary of Education of Guanajuato" to their Facebook Page, celebrating the success of the vaccine clinic for teachers and thanking the participants. 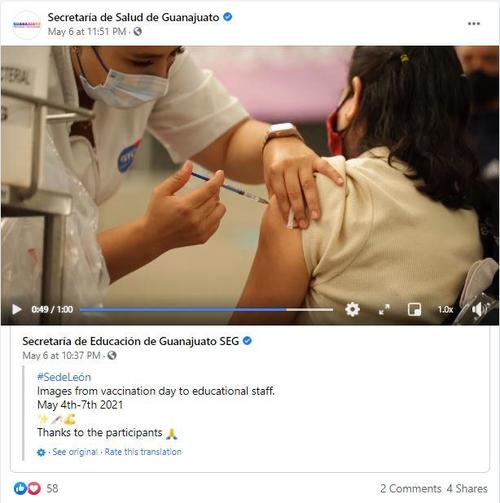