Did a 9-year-old child go to prison for changing the theme-song lyrics to the classic Nickelodeon cartoon, "SpongeBob SquarePants"? No, that's not true: The picture used with the claim is of a young murder victim who was not named "Jake Sanders." Lead Stories could find no evidence of anyone named Jake Sanders sentenced to 15 years in prison for changing the lyrics to the "SpongeBob SquarePants" theme song to something inappropriate. Minors are rarely sent to prison and usually for murder and certain sex offenses.

Child incarcerated for spreading hate message Jake Sanders, a 9 year old boy, was given a minimum 15 years prison sentence today for changing the lyrics of 'SpongeBob Squarepants' to be sung as 'GayBob S**tpants.' 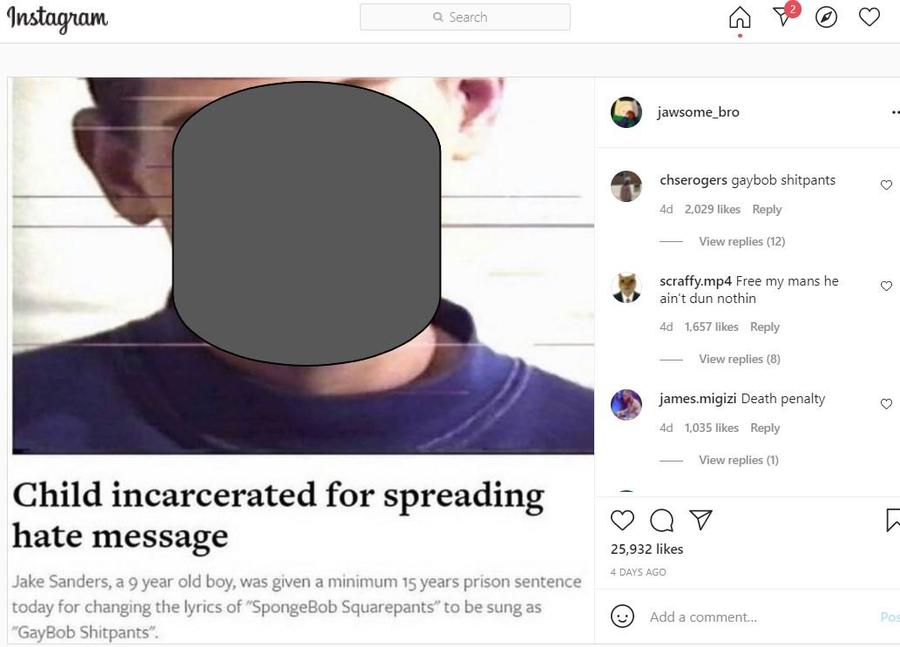 The boy pictured in the post appears to be a Minnesota boy abducted from his home in 1989. His remains were found years later and his killer confessed. Lead Stories has obscured the child's face and removed his name to protect the privacy of his family. The image in the post is a still from a home video that was used in a documentary trailer posted to YouTube.

A reverse image search in Yandex largely showed the same post spread on content-farming websites such as Conservativememes.com and Astrologymemes.com. However, similar images on Yandex led to a minnestotanewscountry.com article from August 2016, about a podcast detailing the case.

On May 25, 2021, Lead Stories emailed the U.S. Court's Public Access to Court Electronic Records (PACER) for further information and clarification on "Jake Sanders" and his case regarding the change of lyrics. The PACER Service Center responded the same day with,

"Unfortunately, that isn't enough information to go on."

Lead Stories reached out to Nickelodeon's press team, through email on May 26, 2021, in hopes that they could tell us about a possible court case made against a minor for changing the lyrics to the "SpongeBob SquarePants" theme song.

Katelyn Balach, the director of the animation press team, responded on May 26, 2021,

"We are unaware of any such thing."