Did the container ship run by Evergreen Marine, Ever Given, which blocked the Suez Canal in March 2021, catch fire? No, that's not true: The container ship in the video that did suffer a fire off the coast of Colombo, Sri Lanka, is the X-Press Pearl, not the Ever Given.

The X-Press Pearl fire started on May 20, 2021, and burned for two weeks, after which the ship sank. The Ever Given is still impounded in the Great Bitter Lake in Egypt, held up in a legal fight over how much compensation the ship's insurer needs to pay the Suez Canal Authority over the March incident.

The claim appeared in a video published on Instagram [email protected] on June 14, 2021, with the caption, "Pay attention." The video was watermarked @InnerSpaceMedia. Titles added to the video said:

(Evergreen) ship that blocked the Suez Canal, on fire?
just wow
The things that were found on this ship would break your heart a million times 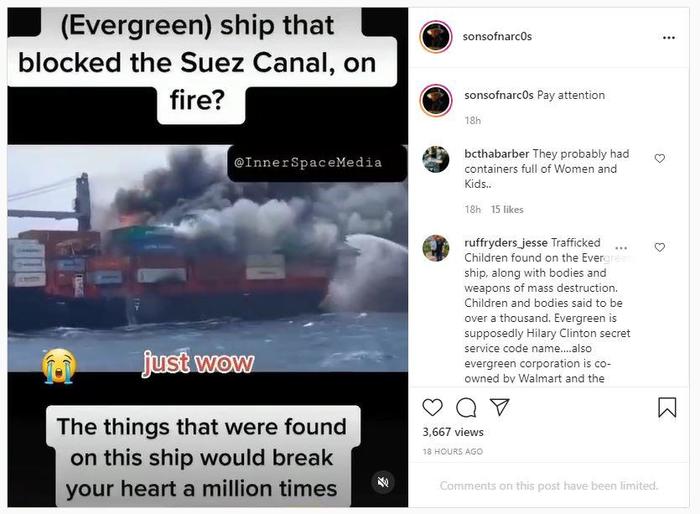 Many of the comments on the Instagram post express concern over trafficked children supposedly trapped on the burning ship that the video captions incorrectly represent as Evergreen's Ever Given. Lead Stories has addressed conspiracy theories surrounding Ever Given and human trafficking in the past (here and here). There is no evidence that any trafficked people were ever held captive or rescued from the Ever Given ship while it was stuck in the Suez Canal.

There have been concerns about the 26-person crew of the Ever Given who still remain with the impounded ship. The Suez Canal Authority says the sailors are not being held for ransom.

The X-Press Pearl was a new ship that had been put into service for X-Press Feeders of Singapore in February 2021. The fire, the sinking of the ship and spilling of the remaining cargo of plastics into the ocean is considered an environmental disaster for Sri Lanka.

The video posted on Instagram targets its audience's pre-existing beliefs. Without actually spelling out its claim -- "The things that were found on this ship would break your heart a million times" -- it implies that trafficked children were killed in the fire.

There were no people reported to have been killed in this fire, and there are no reports of any human remains found on the now sunken ship. The X-Press Pearl's crew was evacuated on May 27, 2021, when there was an explosion. The island.lk reported:

Two Indian crew members of the distressed MV 'X-PRESS PEARL' have been admitted to the National Hospital, Colombo.

The two Indian nationals who sustained injuries had been admitted on Tuesday, said Pushpa Ramyani De Zoysa, the Chief Nurse of the Colombo National Hospital. One of them has been tested Covid-19 positive.

An explosion was reported from inside the MV X-PRESS PEARL, on Tuesday morning, and all 25 crew members were evacuated safely out of the vessel, Captain Indika de Silva, the Navy Spokesperson said.

The distressed container ship was manned by a crew of 25, who are Philippine, Chinese, Indian, and Russian nationals.