Does the government's Vaccine Adverse Event Reporting System (VAERS) provide data or reports that prove the COVID-19 vaccine or other vaccines have caused injuries or deaths? No, that's not true: As the VAERS webpage itself repeatedly explains, its purpose is to collect a wide-open, likely repetitive, messy and incomplete list of anyone's anecdotal, amateur, professional and even malicious reports of post-vaccination problems.

Sifting through the list of unverified reports, the Food and Drug Administration and Centers for Disease Control and Prevention hope to spot groups of similar reports. The agencies can then investigate them to sort out coincidences from real side effects. A rare side effect that doesn't show up in the clinical trials on tens of thousands of patients can affect a few dozen when the drug is cleared for use and injected into millions of patients. That's when it might show up as a pattern of reports in VAERS.

Even that pattern is not itself evidence, since those reports must be checked for authenticity to determine if the VAERS report highlighted a coincidental health event or a vaccine-caused reaction.

The latest version of this misuse of information from the VAERS site appeared in a June 5 Instagram post (archived here) on the Awakened_mama account under the title "Latest VAERS Data Show: 5,165 Deaths Reported Following COVID Vaccines" 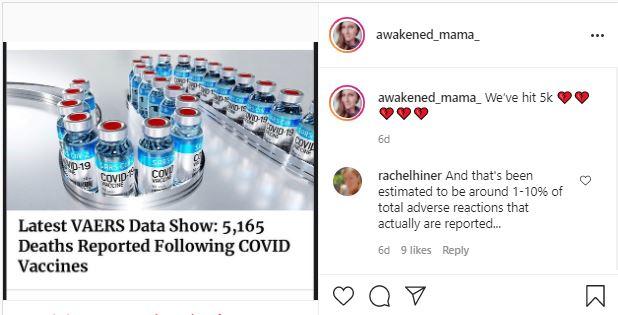 Correlation does not prove causation

Even if every death reported to VAERS is authentic, it is still not logical to assume that every post-vaccination death was vaccine-caused. As Lead Stories pointed out in a January 27, 2021, fact check, that kind of thinking is a prime example of a logical fallacy: Correlation (event B follows event A) is not the same as causation (event B was not caused by event A).

Public health experts have repeatedly reminded those spooked by scare-monger reports derived from the VAERS material that in the first weeks of the U.S. vaccination campaign, the COVID shots were only available to those already in jeopardy: health care workers and the elderly and those with underlying health problems. In that group, death is not rare and blaming their deaths on the vaccine ignores serious threats to their health.

Thousands of people die every day in the U.S., most often from heart disease, cancer and accidental injuries. Assuming every death in the VAERS lists is vaccine-caused is a bit like believing ice cream causes sunburn because every time you go to the beach and eat ice cream you come home with a sunburn.

VAERS is not a precise instrument of measure, nor is it a dataset from which accurate predictions or reports can be assembled. VAERS reports are unverified, can be filed by anyone and, according to the CDC, may include information that is incomplete, inaccurate or coincidental. Multiple people could file a report on the same case. Malicious pranksters could make false reports.

It's a hodgepodge of anecdotal information, not a library of fully investigated cases. When it works correctly, it helps the CDC and FDA monitor the rollout of a new vaccine by revealing patterns.

The website for VAERS makes clear the system's uses and limitations.

People who copy material from the site and post claims, implications or leading questions that encourage readers to see VAERS as a list of proven deaths and injuries are either choosing to deceive or are ignorant of the purpose of the VAERS system. The people creating "VAERS reports thousands of deaths" memes would have seen the relevant warnings if they actually looked at VAERS data. The site reads:

When evaluating data from VAERS, it is important to note that for any reported event, no cause-and-effect relationship has been established. Reports of all possible associations between vaccines and adverse events (possible side effects) are filed in VAERS. Therefore, VAERS collects data on any adverse event following vaccination, be it coincidental or truly caused by a vaccine. The report of an adverse event to VAERS is not documentation that a vaccine caused the event ... VAERS reports can be submitted voluntarily by anyone, including healthcare providers, patients, or family members. Reports vary in quality and completeness. They often lack details and sometimes can have information that contains errors.

A report to VAERS generally does not prove that the identified vaccine(s) caused the adverse event described. It only confirms that the reported event occurred sometime after vaccine was given. No proof that the event was caused by the vaccine is required in order for VAERS to accept the report. VAERS accepts all reports without judging whether the event was caused by the vaccine.

Meme-makers of scary VAERS numbers have broken their word

To gain access to the VAERS data, you have to affirm that you have reads the VAERS website's warning about what VAERS is and is not. So, the person pushing memes to you about scary VAERS material either lied when they said they read the warnings or lied when they said they understood them. Worse, if they read and understood and still claim VAERS is proof of vaccine deaths, a reader would be justified in concluding the meme maker has malicious intent.

VAERS appears to do what it's intended to do

In April, the FDA found a cluster of six cases of rare blood clots among the 8 million people who had received the Johnson & Johnson/Janssen vaccine and ordered a pause. After revising the warning data and noting women seem most likely to be affected by the less-than-one-in-a-million adverse reaction, the FDA cleared J&J/Janssen again for use, noting the benefits of protection from COVID-19 outweigh the extremely rare case of a clots that doctors now know to be alert for and can warn their female patients to quickly seek medical help if symptoms arise. The CDC's report on 88 deaths among vaccine patients found three had thrombosis and did not definitively assign vaccination as the cause of death. Investigation continues, the CDC reported.

The CDC updates the public on the outcome of investigations that arise from observation of the VAERS data at this link on its website. As of June 11, 2021, the CDC reported the vaccines safe and effective, based on the fact that more than 300 million Americans have received the vaccines, government monitoring is some of the most intense in history and investigation of cases of death after vaccination "have not established a causal link to the vaccines.