Did New Zealand's Rodney and Otamatea Times, Waitemata and Kaipara Gazette publish a paragraph on "Coal Consumption Affecting Climate" in the Science Notes and News section of the paper back on August 14, 1912? It's TRUE! This paragraph predicting the effect that burning billions of tons of coal could have on the climate did appear in this New Zealand newspaper over a century ago.

Originally, this paragraph was a caption paired with an industrial illustration in a March 1912 article in Popular Mechanics. The caption was then published as a stand-alone paragraph in several newspapers in following months. A photo of the August 14, 1912, news item appears in a Facebook post by "Historic Photographs" on August 12, 2021, under the caption, "Climate change prediction from 1912." It opens:

The furnaces of the world are now burning about 2,000,000,000 tons of coal a year. When this is burned, uniting with oxygen, it adds about 7,000,000,000 tons of carbon dioxide to the atmosphere yearly. This tends to make the air a more effective blanket for the earth and to raise its temperature. The effect may be considerable in a few centuries.

The image in this post is likely a composite of two images: the newspaper's masthead patched above the paragraph about coal consumption. The archive scan of this page of the August 14, 1912, Rodney and Otamatea Times, Waitemata and Kaipara Gazette, contains many short articles on a wide variety of subjects arranged in long narrow columns, as was dictated by the type-setting and printing technologies of the day.

The paragraph about coal consumption does not appear under the masthead. It's near the bottom of the page under an article about a rope skipping machine -- and not far from an article about cats. These small pieces of content appear to have been syndicated. The climate paragraph had already appeared on page 5 of the July 10, 1912, edition of The Shoalhaven Telegraph, and a search of the digital archives of trove.nla.gov.au shows that at least 10 different Australian newspapers featured this paragraph in the summer and fall of 1912.

A March 1912 article in Popular Mechanics contains the paragraph, word for word, as a caption under an illustration of an industrial scene in an article by Francis Molena titled, "Remarkable Weather of 1911 -- The Effect of the Combustion of Coal on the Climate -- What Scientists Predict for the Future." 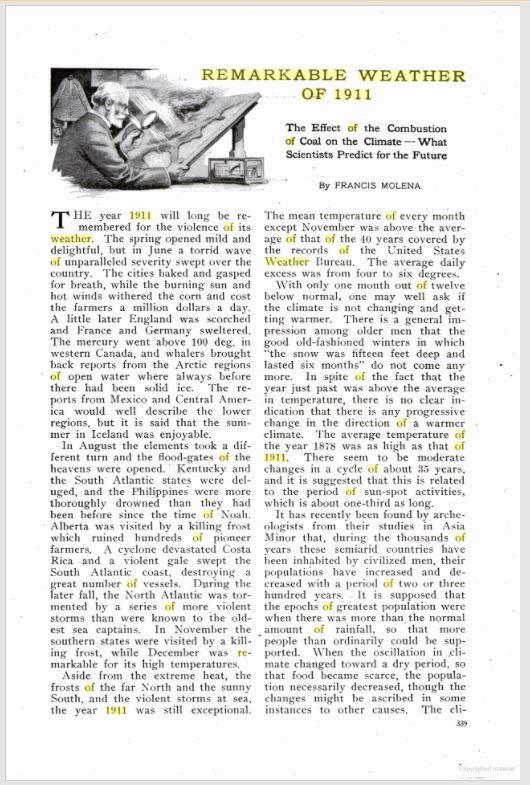 Why do carbon dioxide emissions weigh more than the original fuel?

The amount of carbon dioxide (CO2) that is produced from burning a fuel weighs more than the amount of the fuel itself, because during complete combustion, each carbon atom in the fuel combines with two oxygen atoms in the air to make CO2. The addition of two oxygen atoms to each carbon atom forms CO2, which has an atomic weight of 44--roughly 3.6667 times the atomic weight of the carbon, which is 12.