Did the Miami-Dade Police Department issue a warning about a sexual assault scheme that uses children to target women? No, that's not true: A public information officer from the MDPD confirmed with Lead Stories that the letter, which has been making the rounds online for years, is a hoax.

The claim appeared in a Facebook post (archived here) published on August 15, 2021. The post was captioned "Warning" and featured an image of a warning letter attributed to "Miami Dade County Sheriff's Department." The warning letter read:

This is from the County Sheriff's Department, please read this message very carefully:

This message is for any lady who goes to work, college or school or even driving or walking the streets alone. If you find a young person crying on the road showing you their address and is asking you to take them to that address... take that child to the POLICE STATION!! No matter what you do, DON'T go to that address. This is a new way for gang members (MS13) to rape women. Please forward this message to all ladies & guys so that they can inform their sisters & friends and family. Please don't feel shy to forward this message. Our 1 message may save a life. Published by CNN & FOX NEWS (Please circulate)... "*Please DO NOT IGNORE! Thank you !

In an email to Lead Stories on August 17, 2021, Detective Chris Thomas, a public information officer for the MDPD, said about the post:

According to the image you attached, it appears to be the same post we previously reviewed. We do not have any updates on this and still know this to be hoax.

A version of the warning letter has circulated around the internet since at least May 2017, according to a post on the MDPD's Facebook page. The MDPD labeled the letter "Fake" and said that the department had "no intelligence that would support its contents." The 2017 post is included below:

Additionally, as one astute commenter on the Facebook post making the fake claim pointed out, the warning letter was attributed to "Miami Dade County Sheriff's Department," although the official name of Miami-Dade County's police department at the time the post was published was "Miami-Dade Police Department." A screenshot of the comment is included below: 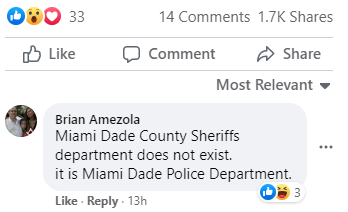