Did LeBron James blame disappointing "Space Jam 2" numbers on the "long history of systemic racism at the box office"? No, that's not true: There is no evidence LeBron James said that or anything similar to it. This "Breaking" news story is a layered screenshot of a reply to a tweet from a now-suspended Twitter account, @BBCNewsButGayer. Tweets from this account were constructed as satirical one-liners leading with the word "BREAKING."

Merchandising brought in more than $1b.

Space Jam remains the highest-grossing basketball movie of all time.

It flopped because you aren't Michael Jordan.

On August 6, 2021, Amiri King replied to a July 29 2021, tweet from a satirical account that had a profile picture and username "BBC News." The Twitter handle of this account was @BBCNewsButGayer. This account regularly tweeted satirically in the format of one-liners phrased as breaking news headlines. Examples of earlier tweets can be seen in captures of the @BBCNewsButGayer account feed archived in July and August before the account was suspended.

Below is an image of how the Google web-cached copy of the July 29, 2021, tweet appeared on August 11, 2021. This shows how the BBC logo and username BBC News figured prominently on the @BBCNewsButGayer account and may have tricked some to think this was true breaking news reported by the BBC. 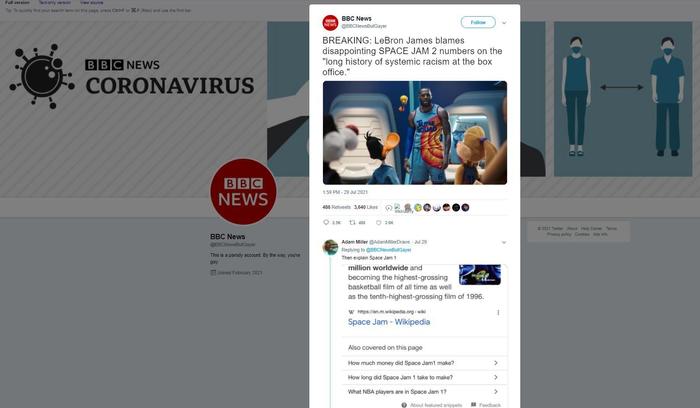 The second level of screenshotting occurred after Amri King posted a screenshot of his reply to @BBCNewsButGayer to this private Instagram account @thekinghasspoken. This second screenshot does not show the full context of the original tweet exchange but continues to confuse, even without the spoofed BBC logo visible.