Did the Cyber Ninjas' Arizona audit report show thousands of illegal ballots? No, that's not true: The Republican-commissioned audit of the 2020 election in Maricopa County -- Arizona's most populous county -- did not prove that more than 23,000 mail-in ballots that were submitted by voters who moved before the election were illegal. The report, which was released on September 24, 2021, noted there were "potential ways" that the ballots cast "would not violate the law" and "some error is expected." Maricopa County disputed the claim that the ballots were illegal, stating that mail-in ballots are "legal under federal election law" and explained in detail the situations where that applied in the state.

The claim appeared as a report published on the official website of the Arizona State Senate Republican Caucus on September 24, 2021, titled "Cyber Ninjas Report" (archived here) which opened:

The final audit that was released included the claim that over 23,000 "Mail-in Ballots Voted from Prior Address" are a "critical" problem from the 2020 election in Maricopa County. Two caveats in the report that refute this claim state "some error is expected," and that the ballots in question may not "violate the law."

The final draft of the report had this information in a table titled 5.2 Finding Summary Table on page 5 and showed: "Mail-in Ballots Voted from Prior Address 23,344, Critical." 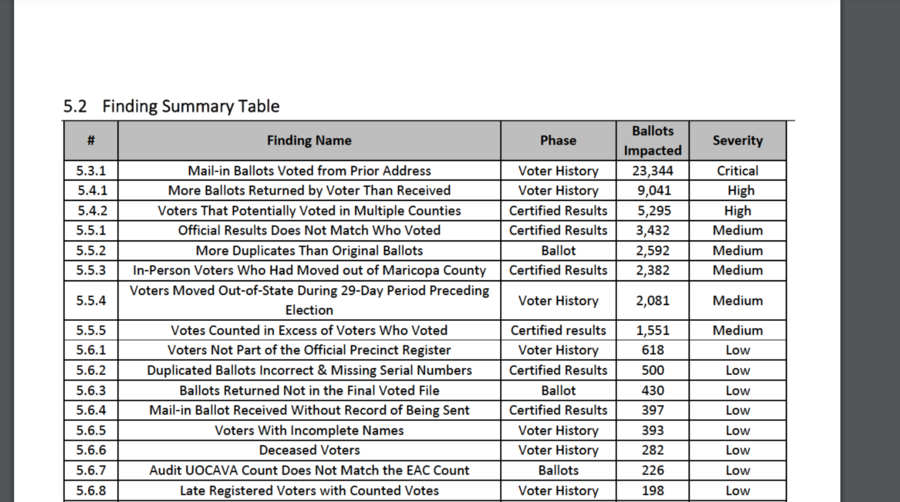 The audit itself notes "There are potential ways that a voter could receive their ballot which in some cases would not violate the law," on Page 7 of the report:

Page 6 of the audit also states:

NOTE: While high quality commercial database sources were utilized to assemble these findings, some error is expected within these results. To further validate these findings, it is recommended that canvassing be conducted."

The Maricopa County official Twitter account posted a debunk of this claim on September 24, 2021, responding to a draft of the audit that had been published in news outlets. The final draft of the audit did not change this information. Regarding the 23,344 mail-in ballots voted from a prior address, the tweets explained why this was legal under federal election law and gave specific reasons why this would have occurred:

CLAIM: 23,344 mail-in ballots voted from a prior address.

BOTTOM LINE: Cyber Ninjas still don't understand this is legal under federal election law. To label it a "critical" concern is either intentionally misleading or staggeringly ignorant. AZ senators should know this too.

EXPLANATION:
1) Military and overseas voters can cast a "federal only ballot" despite living outside the U.S. The address tied to their ballot would be their prior address in AZ.

2) People are allowed to move from one house to another (or even one state to another) in October and November of an election year (yes, shocking!). If the driver's license address matches the voter registration address, they are still allowed to vote.

3) For the November General Election Maricopa County had 20,933 one-time temporary address requests. In addition, snowbirds and college students tend to have forwarding addresses when they are out of the county.

4) Mail-in ballots are not forwarded to another address.

CLAIM: 23,344 mail-in ballots voted from a prior address.

BOTTOM LINE: Cyber Ninjas still don't understand this is legal under federal election law. To label it a "critical" concern is either intentionally misleading or staggeringly ignorant. AZ senators should know this too.

Lead Stories has written about the Arizona audit before. See here for those stories, in which we found that there were not 74,000 more mail-in ballots received and counted than were mailed, that a quarter of a million illegal votes were not found and that the audit did not confirm the rumor that a "special watermark is on the real ballots."