Do these photos depict Christians who refused to deny their faith being suffocated in Afghanistan? No, that's not true: These are video stills taken at a protest performance 8,800 miles from Afghanistan in Medellín, Colombia, on May 26, 2021. The performance happened during the National Strike in Colombia and this performance was intended to be a symbolic tribute to people who had recently been killed.

The false claim appears to have originated in Spanish language posts on September 5, 2021. On September 12, 2021, the claim appeared in English in a post published on the Tolu Ray account on Facebook with this caption:

Alot of evil things is happening around the world,and they're the signs of the End time as the prophecy hath spoken of the signs that will happen before the Rapture of the church.
Those are the Christians who refuse to deny their faith in Christ in Afghanistan, they were tied in nylon to get suffocated till they die.
But remember the word of the master Jesus Christ in John 16:2. But be ye assure of this very thing, he said we have overcometh the world.
No matter what they did to the church, we refuse to compromise,not give up, we have carried our cross,and we can't disembark.
We are still praying 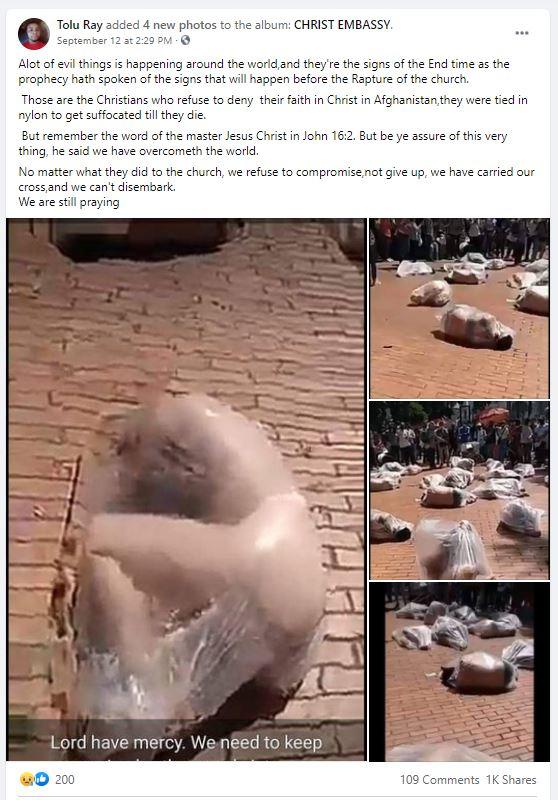 This scene is not related to the Taliban's takeover of Afghanistan in the late summer of 2021, nor to Christian persecution. This is a scene of a performance protest in Medellín, Colombia. The complex situation has been summarized in an issue brief by the Atlantic Council (a non-partisan foreign policy think tank) in this way:

Amid the third peak of the COVID-19 pandemic, Colombia faces the longest and most destructive mass protests in recent history. The protests, which began on April 28, 2021, were triggered by a tax-reform bill proposed by the government to stabilize public debt and fiscal deficit. Despite the bill's removal on May 2, 2021, protests continued and expanded, becoming a broad call for improvements in other areas. To date, dozens of people have died, and thousands have been injured.

The video that was the source of the still images was posted on May 26, 2021 by the Facebook page "Todo Bajo Cero" with the caption:

EVERYTHING UNDER ZERO was live

Performance "Bundled", Poblado Park, 26 May 2021.
A tribute to the people who have turned up dead in the last days, drowned, in pieces and in bags. In honor of all those who left their homes to fight for their rights and could not return home.

Colombiacheck.com reported in a September 9, 2021, article about the viral false claims, that before this scheduled event happened, the May 26, 2021, march locations in Medellín were announced by caracol.com.co. The El Poblado park activities were described this way:

In the El Poblado park there are plans to carry out different symbolic and cultural activities , such as a performance of people who will put themselves in bags, an artists' carnival, a women's choir in an orchestrated march, among others.